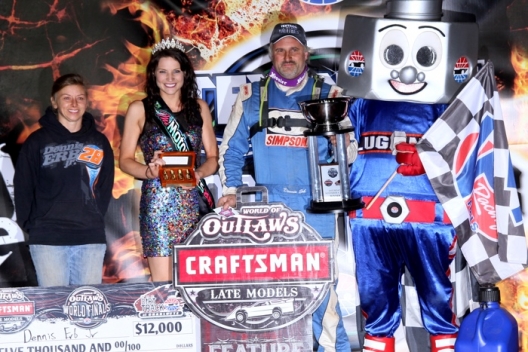 Sliding ahead of Marlar in turn two on lap 46 of 50, the Carpentersville native led the final circuits to earn his fifth career WoO triumph and his sixth victory of the 2017 season.

“We’ve been working real hard,” Erb said in victory lane. “(Crew chief) Heather (Lyne), she put in a lot of time into this. To get here last night and have a second place … we had a real good car last night. We just tweaked on it a little bit here tonight and we were able to get the job done.”

Working around the top side of the racetrack, outside polesitter Shane Clanton of Zebulon, Ga., charged to the lead at the drop of the green flag, with Marlar and third-starting Josh Richards of Shinnston, W.Va., in tow.  As Clanton slipped up the track on lap six, Marlar began closing the gap between himself and the race leader, with the pair crossing the line side-by-side one circuit later.

Clanton maintained the advantage as the frontrunners worked their way through lapped traffic, with Marlar attempting to slide ahead of race leader on lap 21, forfeiting the second-place spot to Erb as he slipped back to third. Marlar rallied back quickly, pulling ahead of Clanton in turn two to take the lead on lap 25.

With the race’s lone caution slowing the field two laps later, Erb held pace with Marlar on the restart, challenging for the lead around the lap-30 mark. As the race neared the checkers, Marlar continued to show the way out front, fighting back Erb and Jimmy Owens of Newport, Tenn., as the frontrunners went three-wide exiting turn two on lap 39.

Never losing his momentum, Erb powered ahead of Marlar with just four laps remaining in the 50-lap distance, pulling away for his second podium finish of the World Finals weekend. He finished runner-up to Brandon Sheppard of New Berlin, Ill., on Friday night.

“We had a good run with (Marlar) there,” Erb said. “I knew the car was good. He slipped up there just a little bit and we took advantage of it. We didn’t want to look back after that because we had a full field behind us. I was glad to be able to get up here and have a good starting spot. The car just worked great."

Marlar finished runner-up, with Owens running third. After slipping back to ninth in the early running, Sheppard rallied back to finish fourth, clinching the 2017 World of Outlaws title. Eight-starting Tim McCreadie of Watertown, N.Y., rounded out the top five.

“We had an awesome weekend,” Marlar said after the race. “It’s awesome to race in front of this many people. This was a cool deal this weekend. It worked out good for us. Congratulations to Dennis. He was really good. He was good last night and really it wouldn’t have been a surprise if he would have won last night. He was awesome there and it was just an awesome race."

After challenging the race leaders, Owens settled for a third-place finish on Saturday night, finishing no worse than fourth over the World Finals weekend.

“We got a little bit of a push there at the end,” Owens said. “We tightened the car up before the race and was a little snugger than what we needed to. We got up there and run those guys down. Once I got to them and got a little bit of air off my nose, I couldn’t turn as good as I could, and then I’d get a little distance and I could run them back down … it was a heck of a show."

As Rick Eckert and Eric Wells battled for the second-place spot, polesitter Brandon Overton charged to an early lead. A yellow flag waved on lap three when Ryan King spun in turns three and four with a right-rear flat. Overton held the lead on the restart, with Wells narrowly edging ahead of Eckert at the line to maintain the second-place spot. Working the high side, Eckert pulled ahead of Wells one circuit later. Overton won the consolation, with Eckert taking the final transfer spot.

Polesitter Brandon Kinzer took and early lead, with second-running Chris Madden in tow. Just three laps into the race, the top two cars had already begun distancing themselves from the field. A yellow flag waved on lap four when Mason Zeigler got in the wall in turn four. Crossing under Kinzer down the backstretch, Madden slid ahead in turn four to take the lead on the restart. Madden stretched his lead late-race to win the consolation, with Kinzer holding on to finish second and transfer to the main event.

Polesitter Casey Roberts charged to the lead at the drop of the green flag, as Darrell Lanigan and Jason Feger raced side-by-side for the fifth-place spot. Roberts held a commanding lead at the halfway mark, with Jared Hawkins running a solid second. With Roberts continuing to lead, Lanigan overtook Nick Hoffman for this, setting his sights on Hawkins. But Lanigan’s charged wouldn’t be enough. Roberts won the consolation, with Hawkins finishing second to transfer to the feature.

Working around the high side, third-starting Shane Clanton pulled ahead of Tyler Erb to take an early lead. With Clanton holding a comfortable lead, Tyler Millwood challenged Erb for the second-place spot at the halfway mark, as the top four cars distanced themselves from the rest of the field. Clanton won the heat, with Erb running second. Millwood rounded out the podium in third.

Polesitter Brandon Sheppard charged to the lead at the drop of the green flag, with fourth-starting Ryan King slipping ahead of Hudson O’Neal and Scott Bloomquist to run in second. Working his way from the sixth starting spot, Brandon Overton moved into a transfer spot by the third lap, with O’Neal challenging the Dream Team driver for third. Sheppard stretched his lead in the late running to win the heat, with Bloomquist finishing second. O’Neal pulled away from Overton to run third and transfer to the feature.

A yellow flag waved on the opening lap for a turn-two tangle involving Jason Jameson, Matt Sponaugle, Greg Clark and Tom Decker III. Ross Bailes shot to the lead as the race went green, with another yellow flag waving one circuit later to allow track officials to replace an infield tire that had been moved up the track surface. Bailes held his lead on the restart, with second-running Dale McDowell closing in to race side-by side with the race leader. Edging ahead in turn two, McDowell took the lead on lap four, with Dale Hollidge challenging Bailes for the second-place spot. McDowell pulled away to win the heat, with Bailes and Hollidge grabbing transfer spots.

Polesitter Mike Marlar took an early lead, with third-starting Jimmy Owens slipping ahead of Brandon Kinzer in turn two on the first lap to run in second. Marlar continued to lead at the halfway mark, with the top two cars distancing themselves from the field. Marlar picked up the heat race win, with Owens and Jonathan Davenport finishing second and third to transfer to the feature.

Polesitter Dennis Erb Jr. charged to the lead at the drop of the green flag, with Tim McCreadie attempting to rally back to a transfer spot after slipping back in the early running. As Erb stretched his lead to a full straightaway at the halfway mark, McCreadie challenged Chase Junghans for the second-place spot. A yellow flag waved on lap six when Don O’Neal slowed with a right-rear flat. Erb won the heat, with McCreadie overtaking Junghans on the restart to finish second.

Pulling ahead of fellow front row starter Nick Hoffman in turn two, polesitter Josh Richards shot to an early lead. A yellow flag waved on lap two when Hoffman and Jason Covert made contact in turn four, with Brian Shirley slowing off the pace and retiring. Richards held his lead on the restart, with Covert edging ahead of Rusty Schlenk to take over the second-place spot. Stretching his lead in the late running, Richards picked up the heat race win. Covert and Schlenk rounded out the podium to transfer to the feature.

Overcast skies and cooler temperatures (a high in the mid-60s) with a brief chance of late-afternoon rain prevail for the finale of the World Finals. … Friday-night winner and 2017 WoO champion Brandon Sheppard of New Berlin, Ill., will attempt to become the second driver to sweep the World Finals doubleheader, joining Jimmy Owens of Newport, Tenn., who pulled off the sweep in 2012. Owens is the all-time winningest World Finals racer with six career victories. … Darrell Lanigan of Union, Ky., didn’t start a World Finals feature for first time in the event’s 11-year history on Friday night when he failed to qualify for the 50-lap headliner. Starting seventh in a heat this evening, he will have to hustle to transfer. … Josh Richards of Shinnston, W.Va., Rick Eckert of York, Pa., and Shane Clanton of Zebulon, Ga., are the last three drivers remaining who have started all 21 World Finals features contested to date. Scott Bloomquist of Mooresburg, Tenn., also has qualified for every World Finals feature he’s attempted, but his perfect record is 19-for-19 because he was ineligible to compete last year. … At least one driver has won a heat race on both Friday and Saturday nights in every year of World Finals competition. Five of the six heat winners from Friday night start on the pole in a prelim this evening. … Jonathan Davenport of Blairsville, Ga., who unveiled the No. 49 Longhorn Race Car he’ll drive for Lance Landers in 2018 Saturday afternoon at his merchandise trailer, was an early retiree from Friday night’s A-main because the shaft holding the rocket arms on the engine of his Donald Bradsher-owned machine’s engine broke early in the 50-lapper. The team installed a fresh powerplant for Saturday’s finale. … Another dropout from Friday’s feature was Jason Covert of York Haven, Pa., whose second career World Finals feature start was ended midway through the race due to a bent front end. … Riley Hickman of Ooltewah, Tenn., saw his weekend end early due to damage his car sustained in a qualifying-race accident on Friday night. He had insult added to injury afterward when a tire blew out on his hauler as he traveled home. … Tyler Carpenter of Parkersburg, W.Va., has parked his Kryptonite for Saturday’s program because a Friday heat-race incident left it with front frame damage. He spun after oil that blew out from his car got on his tires and he was then hit by another vehicle.

Saturday’s heat race lineups were determined by Thursday’s second round of time trials. Clocking the overall fast time for the night’s program, Josh Richards of Shinnston, W.Va., will start on the pole of the first heat race. The top three cars from each heat will transfer to the night’s main event.

Consolations and series provisionals will set the remainder of the feature field. The program will also include WoO Sprints and big-block modifieds. DirtonDirt.com is offering live pay-per-view coverage of the event.