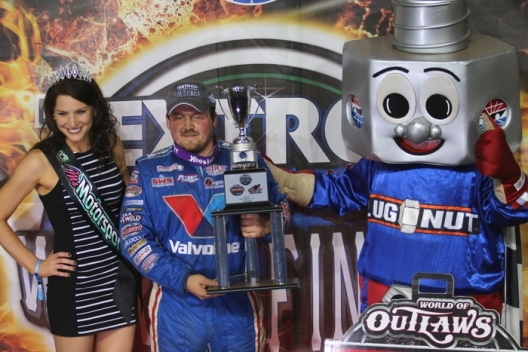 Charging around the high side, the sixth-starting Sheppard overtook polesitter Mike Marlar of Winfield, Tenn., with two laps remaining in Friday’s 50-lap World of Outlaws feature, outrunning Dennis Erb Jr. of Carpentersville, Ill., for a $12,000 Textron Off Road World Finals victory at The Dirt Track at Charlotte.

“I haven’t been this pumped up in a while,” Sheppard said in victory lane. “Mark Richards and Steve Baker and everybody at Rocket Chassis, they gave me an opportunity to drive this car a few years ago in 2012 and have basically took me under their wing since then and taught me a lot and really matured me a lot as a driver. What a phenomenal year."

Marlar shot to the lead at the drop of the green flag, working his way through lapped traffic in the early running to stretch his lead over the second-running Jimmy Owens of Newport, Tenn. With the race slowed by a caution just shy of the halfway mark, Erb shot past Owens to take over the second spot, joining the battle up front.

As the race leaders entered lapped traffic again on lap 33, Erb began closing in on Marlar, pulling alongside the No. 157 down the backstretch on lap 37. The pair racing side-by-side, Erb edged ahead of Marlar at the line to take the race lead on lap 42.

Erb’s turn at the point would be short-lived, as Marlar pulled back ahead two circuits later. But it was Sheppard rallying around the top of the racetrack to join the battle for the lead in the final stages of the 50-lapper. Pulling ahead of Marlar in turn two, Sheppard grabbed the lead on lap 48, leading the final two circuits to tie the World of Outlaws single-season win record with his 18th series victory of the year.

“The bottom was starting to latch up a little bit at both ends,” Sheppard said. “I got around Dale (McDowell) there and got around Josh (Richards). The three of them were bunched up all together in the bottom in front of me messing around with some lapped cars. I knew we had the points wrapped up already, so I was either going to crash it or win."

“We were both racing hard there,” Erb said of his battle with Marlar. “I wanted to be up where he was. We were trying, but he was right there being able to stay side-by-side with me. We had a real good race there, then Sheppard came around there on the outside. But we’ve had a good start to the weekend so far and to bring home a second, we’re happy with that.”

With lapped traffic slowing his momentum in the late running, Marlar settled for a third-place finish after leading much of the race.

“It was an awesome race,” Marlar said. “Dennis and I  got to racing and I was behind Rick Eckert trying to get around him. When I finally squeezed by Dennis and got in front of Eckert, I thought, ‘I’m alright now, I can ride this thing out, I think.’ And here comes Brandon. I’m like, ‘New game plan. We’re going to have to do something else.’ Congratulations to Brandon. If anybody can get up and run around that wall wide open and get a win, it’s him."

Notes: Sheppard earned his 24th career World of Outlaws victory. … Notching his 18th tour victory of the season, Sheppard tied Josh Richards of Shinnston, W.Va., for the series single-season win record. Richards posted the win total last season. ... The race had three different leaders: Marlar (1-41, 44-47), Erb (42-43) and Sheppard (48-50). … Two cautions slowed the feature event. … The first yellow flag waved on lap 17 when Zach McMillan got into the wall in turns one and two. … Jason Covert slowed in the bottom of turns one and two to draw a caution on lap 23.

Slipping under polesitter Nick Hoffman in turn four, second-starting Brent Larson took an early lead. A yellow flag waved on the second lap when Gary Clark and Brian Ledbetter tangled in turns three and four; Steve Francis retired under the caution after getting into the wall in turns one and two. Larson held his lead on the restart, with Hoffman running a solid second. With the top-two pulling away from the field, a three-car battle ensued for the third-place spot between Morgan Balgey, Dan Stone and Clay Daly. Larson won the consolation, with Hoffman taking the second and final transfer spot.

Charging around the high side, Chris Madden shot to an early lead, with Eric Wells and Rick Eckert challenging Tyler Erb for the third-place spot. As Madden and second-running Casey Roberts distanced themselves from the field, the battle for third continued, with Eckert pulling ahead of Erb on lap six. As the race leaders approached lapped traffic, Roberts started reeling in Madden, with a yellow flag waving on lap eight for the slowing Rusty Schlenk. Madden held on to win the consolation, with Roberts finishing second to transfer to the feature.

Polesitter Jonathan Davenport shot out to an early lead, as Steve Casebolt slipped ahead of Dale Hollidge to run in second. A yellow flag waved on lap three when Tyler Carpenter and Brian Ruhlman tangled in turn two. Another yellow flew on the ensuing restart when Riley Hickman got into the turn one wall. Rolling around the high side, Casebolt began closing in on Davenport as the race went back green, but was unable to challenge for the lead. Davenport pulled way late-race to win the consolation, with Casebolt grabbing the second and final transfer spot.

Slipping under polesitter Tim McCreadie in turn two, Brandon Sheppard took an early lead. The pair raced side-by-side, with McCreadie challenging for the lead down the backstretch on lap three. As Sheppard and McCreadie distanced themselves from the field, a yellow flag waved on lap five when Brian Ledbetter spun in turns three and four. Ross Bailes spun in turns one and two to draw another caution on lap six. Sheppard led the final two laps, with McCreadie and Benji Hicks grabbing transfer spots.

Polesitter Dennis Erb Jr. charged to the lead at the drop of the green flag, as Chase Junghans and Don O’Neal battled for the runner-up spot in the early running. Erb stretched his lead to nearly a full straightaway at the halfway mark, with Junghans running a solid second. Erb won the heat, with Junghans and O’Neal rounding out the podium.

With front row starters Dale McDowell and Chris Madden holding their positions in the early running, Eric Wells began reeling in third-running Zach McMillan. A yellow flag waved on lap four for a turn-two tangle involving Matt Sponaugle and Joey Coulter. McDowell held his lead on the restart, with McMillan slipping ahead of Madden to take over the second-place spot. Another yellow flag waved on lap six when Kerry king got into the wall in turn four. McDowell won the heat, with McMillan finishing second. Jason Covert edged Madden at the line to finish third and transfer to the feature.

A yellow flag waved on the opening lap for a turn-four tangle between Jared Hawkins and Russ King. Polesitter Brandon Kinzer took the lead as the race went green, with Jimmy Owens shooting into the second-place spot. As the race reached the halfway mark, Owens began reeling in Kinzer, pulling ahead down the backstitch of lead lap five. Owens pulled away to win the heat, with Kinzer finishing second. Brandon Overton edged ahead of Rusty Schlenk on the final lap to take the third and final transfer spot.

As polesitter Josh Richards charged to an early lead, Hudson O’Neal and Brian Shirley raced side-by-side for the second-place spot, with the advantage going to O’Neal on the third lap. Richards stretched his lead to nearly a full straightaway in the late running, with the top three cars pulling away from the field. Richards, O’Neal and Shirley all transferred to the feature.

A yellow flag waved on the opening lap when Chub Frank spun in turn one. Polesitter Mike Marlar shot to the lead as the race went green, as Scott Bloomquist slipped back to run in third. With Marlar setting a torrid pace at the halfway mark, Jonathan Davenport attempted to reel in Bloomquist for the third-place spot, losing momentum in the late running. Bloomquist and second-running Clanton made on contact on the seventh lap, with Bloomquist nearly getting sideways in turn four. Marlar picked up the heat win, with Clanton edging out Bloomquist for second.

Weather conditions for Night 2 of the World Finals are once again splendid. Skies have been slightly overcast during the afternoon with the high temperature soaring to near 80. … No hot laps are scheduled for the three divisions in action, reducing the number of laps on the racing surface and allowing competition to begin at 5 p.m. … The World Finals’ 75-car field is the third-highest car count for a Dirt Late Model event in 2017, trailing only Eldora Speedway’s World 100 (105 cars) and Dream (79 cars). … Brandon Sheppard of New Berlin, Ill., clinched his first-ever WoO championship by simply entering the weekend’s action, freeing him to go all out in his bid to establish a new single-season WoO win record. He will tie Josh Richards’s standard of 18 wins set in 2016 with one victory and pass it by sweeping the doubleheader. … Drivers who earn pole starting spots for heat races on both Friday and Saturday with their Thursday qualifying efforts were Shinnston, W.Va.'s Richards, Mike Marlar of Winfield, Tenn., Dale McDowell of Chickamauga, Ga., and Dennis Erb Jr. of Carpentersville, Ill. … Chris Ferguson of Mt. Holly, N.C., saw his weekend at what is effectively his home track end early due to a broken water pump during Thursday’s hot laps. He will spend the remainder of the World Finals manning the ButlerBilt Seats display in the pit area. … Kyle Hardy of Stephens City, Va., failed to log a qualifying lap in Thursday’s time trials because his car’s engine went silent as he entered turn one due to a malfunctioning emergency shut-off switch. He came back to time 11th-fastest with Shawn Martin’s XR1 Rocket in the second round of qualifying. … Rusty Schlenk of McClure, Ohio, was very pleased with his qualifying performance in his first appearance at Charlotte, timing sixth and seventh in the two rounds to earn prime starting positions in this weekend’s heat races. He said he used a z-link rear suspension on his 1-race-old C.J. Rayburn house car. … Kevin Rumley rolled into the pit area behind the wheel of his own team’s toterhome and trailer shortly after 3 p.m. Inside the transporter was the first Lance Landers Motorsports No. 49 that Jonathan Davenport of Blairsville, Ga., will unveil at his merchandise trailer on Saturday at 1 p.m.

The Textron Off Road World Finals action continues on Friday at The Dirt Track at Charlotte with the first of two World of Outlaws Craftsman Late Model Series weekend events. The 50-lap feature pays $12,000-to-win.

Friday’s heat race lineups were determined by Thursday’s first round of time trials. Fast qualifiers Mike Marlar of Winfield, Tenn., and Dale McDowell of Chickamauga, Ga., will start on the pole of the first and fourth heat races, respectively. The top three from each of the night’s six heats will transfer to the main event.

Consolations will set the remainder of the feature field. Along with Late Models, big-block modifieds and World of Outlaws Sprint Cars will be in action. DirtonDirt.com is offering live pay-per-view coverage of the event.