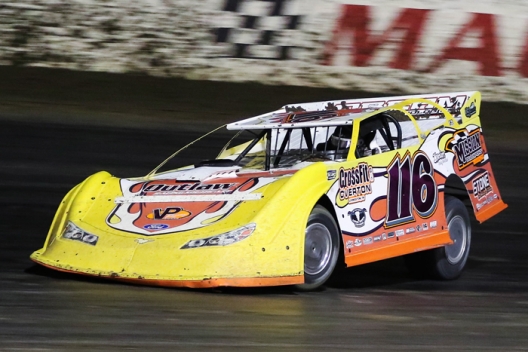 COLUMBUS, Miss. — For more than 70 laps, it looked as though the Magnolia State Cotton Pickin’ 100 would undoubtedly be settled between the sport’s two most recent crown jewel winners. Mike Marlar, fresh off a victory in last weekend’s Knoxville Nationals, and Jonathan Davenport, winner of the 47th annual World 100 on Sept. 9, sparred like a pair of heavyweights, lap after lap trading sliders rather than jabs.

Finally Davenport seized control, building a lead of nearly two seconds over Marlar. But just when it appeared the Blairsville, Ga., driver was on the cusp of another five-figure payday, another Georgia phenom entered the fray, threw a vicious slider of his own and drove away.

Marching forward from his 16th-starting spot, Brandon Overton of Evans, Ga., took the lead from Davenport on a lap-73 restart and pulled away, holding off Marlar, of Winfield, Tenn., to win Mississippi’s richest race. The win at Magnolia Motor Speedway was worth $20,000.

“If there’s anywhere you can come from the tail, it’s here,” said Overton. “(Johnny Stokes) does a great job (prepping the track). We’re never disappointed for sure. Every time we come over here, it’s a damn good race. When we won that Lernerville race we sucked all day and finally pulled it all together. It’s just … I got a good team behind me. We put the right tires on and we did the right adjustments.”

Feeling a sense of urgency as the laps wound down, Overton used a slider to grab the lead on the late restart, which followed a long caution for extensive track cleanup when the rearend in Caleb Ashby’s machine dumped fluid through turns one and two. Davenport had to check up as they raced off of turn two to keep from running into Overton, allowing Marlar to grab the second spot.

“I was kinda panicking,” said Overton. “Vinny was over there telling me to calm down, calm down. We had that long caution over there and I had hard tires on and knew them things were gonna seal up or do something stupid. I just felt like I needed to go then to make sure I was good at the end … get out front and try to get going.”

And get going he did. Marlar briefly led on lap 77, but Overton pulled back ahead and cruised to his 18th victory of the season and 17th behind the wheel of the Chip Stone-owned, Randy Weaver-prepared Longhorn Chassis.

After the seventh and final caution bunched the field with 16 laps remaining one last time, Marlar turned back another challenge from Davenport and finished second. Davenport held on for third, while Kyle Bronson of Brandon, Fla., rallied from 21st to finish fourth and third-starting Dane Dacus of Lakeland, Tenn., who hung around the top five all night, finished fifth.

“Just an awesome race,” proclaimed Marlar. “A lot of give and take there. A little bit of rubbing and a fun race right there. I said before the race this ain’t your typical deal (with) the rain. We was just a little too soft on the tires. Congratulations to Brandon. They gambled and it paid off. I got my shot right there with whatever … 13 (laps) to go. I was like, I don’t know how I got back in front of these guys, but my tires are gone and I just hope I can keep ‘em behind me. But I wasn’t good enough. He passed me back.”

Marlar thought he may have been reeling Davenport in when Spencer Hughes slowed on lap 73 to draw the sixth caution of the race. During the break for the yellow, Ashby pulled up lame near the track’s exit in turn two, his car clearly trailing a shiny stream fluid. It took a considerable amount of time to clean up the residue, after which the complexion of the race had changed.

“I just had a really good rhythm when the caution came out on (lap 73) you know,” said Marlar. “I felt like I was gaining back. I had got in a little rhythm and the car was decent. Even though I was on soft tires the cautions really hurt me as weird as they might sound. Once I got ‘em warmed up, they were working a little bit better.”

No one was more affected than Davenport. He emerged from an early lead-swapping battle with Marlar to command the middle stage of the race, building a comfortable advantage in the process. Following the caution, however, Davenport’s car clearly wasn’t the same.

“I think my tires sealed up really,” said Davenport. “We weren’t as good after that long caution. I didn’t know if that was oil or water. I didn’t know which tire to run through it. I knew I had to though, because that was pretty much my line there. Congrats to (Overton). They put on the right tires. That was a hell of gamble, but sometimes it pays off and that’s what it’s all about.”

Notes: There were four race leaders. Dacus led a single lap to join Overton, Marlar and Davenport. … Davenport reached lapped traffic by lap nine. There had already been two lead changes by then. … All three podium finishers raved about the race surface. “This place never disappoints,” said Marlar. “Johnny (Stokes), he took a little bit of a wet situation and he always comes through for us. I really appreciate him and these fan for coming out and supporting us.” … Davenport compared the early battle for the lead to a board game. “This place moves around so much. Me and Mikey was having a hell of a race there for awhile,” said Davenport. “That was pretty fun. It was a little bit like a chess match. You had to know when to slide him, when to not to. You almost had to slide yourself to stay out in front.” … The race was slowed by seven cautions. The yellow flew for Austin Rettig (lap 19), Brian Rickman (lap 22), Hunter Rasdon (lap 29), Billy Moyer (lap 45), Nick Thrash (lap 66), Spencer Hughes (lap 73) and Chad Thrash (lap 84). … Thirteen cars finished the race, with eight finishing on the lead lap. … Only six drivers stuck around to compete in the non-qualifier’s race, which was won by Louisiana’s Tanner Kellick.

A late afternoon Thunderstorm swept across the speedway Saturday, sending tents flying in the pit area and the camping area, forcing drivers and fans to take cover. The storm, which lasted about 30 minutes delayed the start of Saturday's finale by approximately one hour. Cars took to the track for hot laps at 6:57 p.m. … After his disqualification following Friday’s second heat race, Billy Moyer Jr. of Batesville, Ark., loaded up and headed home, opting not a start in the tail of the B-main. Moyer Jr. was DQ’d because his car’s scoring transponder was mounted to the front of his car rather than the rear axle tube. … Timothy Culp of Prattville, Ark., made an engine change after Friday’s heat race. With his engine stumbling a bit in his heat, Culp, who will start eighth in the main event, talked with Glen Clements and decided to make the swap. … It’s the first trip to Magnolia for Ross Bailes of Clover, S.C. Despite having to run a consolation race, Bailes had high praise for the track. “I really like it,” said Bailes, adding that slick tracks weren’t necessarily his forte. With the afternoon rain, Bailes, who starts on the second row of the second consolation race, may have a faster track than expected. … Eric Cooley of Fulton, Miss., is among drivers who have scratched for the night, joining Tennesseans Eric Hickerson of Linden and Ray McElhiney of Pulaski who opted not to return after Friday’s prelims. ... Shane Stephens of Arlington, Tenn., experienced oil pressure issues for the second night in a row, hampering is effort. Stephens was hoping to start his consolation race.

Going out ninth among the 21 drivers in the first group, Billy Moyer of Batesville, Ark., tripped the clock at 13.276 seconds to claim the overall fast time out of 42 drivers. Moyer picked up a new battery powered pop rivet gun from Magnolia Race Products for his effort. The Hall of Famer will start from the pole of the first heat race alongside World 100 winner Jonathan Davenport of Blairsville, Ga. Hometown driver Rick Rickman was second in the first group and will start from the pole of the second heat with Dane Dacus of Lakeland, Tenn., to his outside. Jason Croft of Woodstock, Ga., was the fast qualifier in the second group with a mark of 13.790 seconds to earn the pole for the third heat with 16-year-old Spencer Hughes of Meridian, Miss., joining him on the front row. Fresh off last weekend’s Knoxville Nationals victory, Mike Marlar of Winfield, Tenn., starts from the pole of the fourth and final heat, with Michael Arnold of Hattiesburg, Miss., to his outside. The top four from each heat advance to Saturday’s A-main.