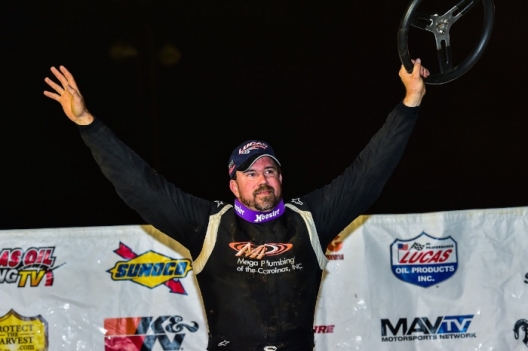 Charging late-race, Davenport attempted to cross ahead of Owens down the backstretch on lap 82, making the move stick one circuit later. Fighting back challenges from Tim McCreadie of Watertown, N.Y., in the final laps, the 2015 Lucas Oil Late Model Dirt Series champion held on to score his first tour victory of 2017.

“It’s just awesome, especially the way we done it with this bunch of guys here” Davenport said. “I’ve got to thank (car owner) G.R. (Smith). How cool is that, stepping out of his own seat, as good a driver as he is. To allow me to come in with the deal I went through and get in his seat … it’s the only car we got … just to have enough faith in me to let me drive. It says a lot.

It was Owens jumping to the lead at the drop of the green flag, as Davenport battled Josh Richards of Shinnston, W.Va., and Chris Ferguson of Mount Holly, N.C., for the runner-up spot in the early running. As the frontrunners worked through lapped traffic, the trio began closing in on Owens, only to have the pace slowed by a string of mid-race cautions.

As the race neared the halfway mark, Owens continued to show the way out front, with Davenport maintaining his position in the top five. Rallying from the rear of the field was McCreadie, who had advanced from his 17th starting position to run in fifth when a yellow flag waved on lap 51.

After attempting a couple of slide jobs, Davenport moved into the second-place spot on lap 70, gaining position when Richards slipped on the backstretch. Using lapped traffic to his advantage, Davenport edged ahead of Owens with less than 20 laps remaining in the feature event, holding off McCreadie’s charge for his first career Hillbilly 100 victory.

“The line moved around a whole lot out there,” Davenport said. “At the first of the race, I was patient. I let (Chris Ferguson) by me on the outside. Earl (Pearson) got by me on the outside. At one time, I passed Earl in one and two and I passed Ferguson and Josh (Richards) in three and four and got all the way to second and then the caution come out, so I had to go all the way back to fifth.

“Me and Earl was racing back and forth and every time I’d get ahead of him, the caution came out. It seemed like every time I would pass somebody, would finally get rolling, the caution would come out. One of those last cautions there, when I was in third, I was about to roll Josh on the outside and a caution come out then.

"We had to move around a lot. I had to use the cushion a little bit, I had to run the bottom a little bit. I finally passed Josh on the bottom there and just had to keep moving around and searching."

McCreadie finished runner-up, with Owens settling for a third-place finish at the checkered flag. Fifth-starting Don O’Neal of Martinsville, Ind., ran fourth, with Richards rounding out the top five.

“I didn’t mean to get in to Josh, but that was the only way,” McCreadie said. "I fought with Don O’Neal for a lot of the race and then finally cleared him. I know Josh didn’t know I was down there. I tried not to get over him. I just tried to not stand on him too hard. I was trying to go as hard as I could at that point. But I got to running that top and getting a huge run. It just seemed to carry my momentum better.

“When I went through the middle or the bottom, it just was so slimy down there that you couldn’t get a good squirt off the bottom. We started running J.D. down and I thought, ‘Well, if we can get him in traffic here and get him off his line.’ We kind of had the same line going there. I saw the white flag and I knew that if I wasn’t all the way up beside him there was no way we’d be able to get him at the line. We did our best."