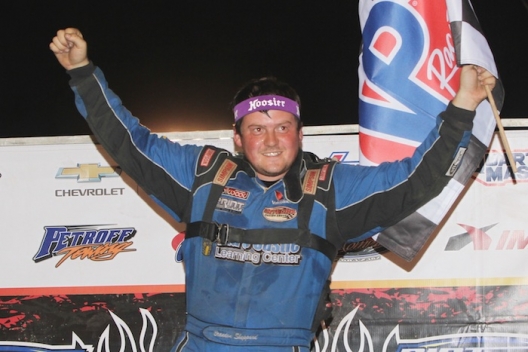 “We’ve been running Summernationals for a long time,” Sheppard said. “This has always been the goal, just to keep winning races. It’s just been awesome. We’ve had a really good car. Mark Richards has taken me under his wing since 2012 and teaches me everything he knows. I can’t thank him enough for that."

Edging ahead of polesitter Mike Marlar of Winfield, Tenn., as the pair exited turn four, Sheppard took the lead on the second lap, cruising over the field until the race was slowed by its first caution on lap six.

Sheppard held his lead on the restart, with sixth-starting Babb using the momentum to pull ahead of Marlar and take over the second-place spot on lap eight. With Sheppard moving in to lapped traffic on lap 18, the battle for the runner-up spot continued behind him, as Babb fought back challenges from Marlar and Bobby Pierce of Oakwood, Ill.

With Sheppard stretching his lead to almost a full straightaway late in the race, the tight battle for second continued, with Chub Frank of Bear Lake, Pa., advancing from the 12th starting spot to join the frontrunners.

Sheppard sailed to his 16th career Summernationals victory, with a close finish behind him. Babb ran second, with Frank edging Pierce at the checkers for third. Rallying from the 21st starting spot, Gordy Gundaker of St. Charles, Mo., rounded out the top five.

“I was just good enough in the bottom to where i could stay in front of them and move to the top and get to the right line and keep going,” Sheppard said. “It was just another great night. We hope we can keep it going. We were thinking about taking tomorrow night off. But how can you take a night off now? I guess we’re headed to Belleville.”

“I think it was just top dominant,” Babb said. “On the start the bottom was real good and we were real fortunate to be able to start sixth and get in that bottom and get to where we got to. But I could tell the bottom was wearing down and slowing down. That momentum is always hard to beat. We just got up there and held on. I know Bobby (Pierce) was all over us, but we had the line. We ran as hard as we did to get a good finish."

Notes: Sheppard notched his 16th career Summernationals victory, moving him 10th on the series all-time win list behind Jason Feger of Bloomington, Ill., and Kevin Weaver of Gibson City, Ill., who each have 17 tour victories. … The New Berlin driver is a former Summernationals winner at Fayette County, picking up a Hell Tour victory at the Brownstown oval back in 2014. … With a $100 bonus paid for each lap led, Sheppard’s winner’s purse totaled $14,900. … The race was slowed by two cautions. … The first yellow flag waved on lap six when Austin Theiss spun in turns three and four. … Theiss spun in turns one and two to draw a second caution on lap 22.

Polesitter Gordy Gundaker edged ahead of Austin Theiss at the line to lead the opening lap, with Theiss powering to the front of the field one circuit later. By lap five Daryn Klein had joined the battle up front, challenging Gundaker for second, and moving in to to the runner-up spot on lap seven. Working around the high side, Klein started reeling in Theiss, leading lap 11. Klein won the B-main, with Theiss running second to transfer to the feature.

Polesitter Tyler Erb shot to the front of the field at the drop of the green flag, with Brian Shirley closing in on lap three. A three- car battle ensured for the third-place spot between Chub Frank, Jordan Bauer and Bob Gardner, with the edge going to Frank. With the top-two cars distancing themselves from the held at the halfway mark, the battle for third continued between Frank and Bauer. Erb won the heat with Shirley, Frank and Bauer grabbing transfer spots.

Running side-by-side down the backstretch, outside polesitter Bobby Pierce pulled ahead of Shannon Babb to take an early lead. Pierce began stretching his lead at the halfway mark, with Ryan Unzicker outselling Austin Theiss to run fourth. Pierce won the heat, with Babb finishing runner-up. Billy Moyer Jr. held off Unzicker to run third, with Unzicker finishing fourth to transfer to the feature.

Polesitter Brandon Sheppard edged ahead of Kyle Bronson to lead the opening lap, stretching his lead in the early running. Improving from the fourth starting spot, Jason Feger attempted to reel in second-running Bronson, with a yellow flag flying on lap five when Caleb Ashby spun in turns one and two. Feger and Bronson’s battle continued on the restart, with Sheppard maintaining a solid lead. Sheppard picked up the heat race win, with Bronson finishing second. Feger ran third, with Kevin Weaver grabbing the fourth and final transfer spot.

A yellow flag waved on the opening lap when Tanner English and Paul Stubber tangled in turns one and two, bring the race to a complete restart. Polesitter Mike Marlar charged out to an early lead, as Gordy Gundaker powered from fourth to run second on the first lap. The top two cars distanced themselves from the field, as Tanner English and Brent Larson battled fro third. Gundaker challenged Marlar just before the hallway mark, with a yellow flag waving on lap six when Larson slowed with a flat tire. Using the restart to his advantage, English pulled ahead of Gundaker to run second. Marlar won the heat, with English, Rusty Schlenk and Tim Manville transferring to the feature as Gundaker slipped back in the late running.

The Summernationals tour visits Fayette County for the eighth straight season. … In its last seven events at the Brownstown, Ill., oval, the series has had seven different winners. … Winning the last four Hell Tour events, Brandon Sheppard of New Berlin, Ill., sat atop of the third week’s points standings. But because series rules state a driver must have perfect attendance for the week to be eligible for the bonus money, the funds were awarded to Bobby Pierce of Oakwood, Ill. Sheppard was not on hand for Tuesday’s event at Charleston (Ill.) Speedway. … Sheppard is just fifth driver to have a series win streak of three or more. If he stretches it to five, it puts it among the six longest streaks of all-time on tour. … Along with Sheppard, former Fayette County winners on hand for Tuesday’s show include Brian Shirley of Chatham, Ill., Ryan Unzicker of El Paso, Ill., Jason Feger of Bloomington, Ill., and Shannon Babb of Moweaqua, Ill. … Planning to join the World of Outlaws Craftsman Late model Series for its Wild West swing, Mike Marlar of Winfield, Tenn., is among Tuesday’s entrants at Fayette County. … Chub Frank of Bear Lake, Pa., is back with the Hell Tour after notching a podium finish on Sunday at Lincoln (Ill.) Speedway. … Tanner English of Benton, Ky., is piloting the Steve Lampley- owned No. 33.

The UMP DIRTcar Summernationals moves to Fayette County Speedway on Tuesday for the 17th round of Hell Tour action. The July 4 special pays $10,000-to-win, with a $100 bonus for each lap led.

Josh Richards of Shinnston, W.Va., was the winner of last year’s Summernationals stop at Fayette County, but is not on hand for Tuesday’s event. Brian Shirley of Chatham, Ill., a former Fayette County winner and the 2016 runner-up is among entrants.

Tuesday’s program will include time trials, four 10-lap heat races, consolations and the 50-lap main event. Modifieds and B-mods will also be in action.