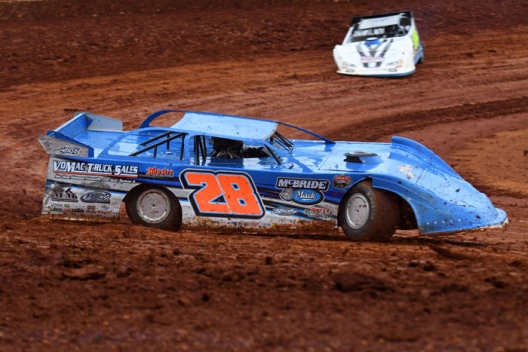 CLARKSVILLE, Tenn. — After running roughshod over his competitors for 33 laps, Dennis Erb Jr. had to be perfect for the final seven. When a caution wiped out a monstrous lead he’d built in a caution-free 33-lap span, Erb, of Carpentersville, Ill., hit his marks with precision over the final seven circuits to win Monday’s UMP DIRTcar Summernationals race at Clarksville Speedway.

Billy Moyer of Batesville, Ark., futilely gave chase in the waning laps, but settled for second place, some 1.139 seconds back. Bobby Pierce of Oakwood, Ill., finished third ahead of Ryan Unzicker of El Paso, Ill., and Shannon Babb of Moweaqua, Ill., in what was a who’s who of Summernationals champions in the top five.

Erb, along with Moyer, Pierce and Babb, collectively own 15 Summernationals titles and 220 Hell Tour victories. With the win, his 22nd career Summernationals victory, Erb collected $5,000 and moved to within one of Rick Aukland for the fifth spot on the series’ all-time win list. And he did it in dominating fashion. Erb won his heat and then drew the coveted No. 1 spot for the feature. Using the short way around the track, he built as much as a 4-second lead before being slowed by the caution with seven laps remaining.

“The car felt really good. To be able to start up front and get out in the lead there and set our own pace (was ideal),” Erb said. “The car worked real well. We were able to maneuver through traffic real well, so we couldn’t ask for anything better tonight. You know that caution there at the end, I didn’t want to see that, but it all worked out for us. We were able to get the jump and pull away a little bit there. We had a pretty good lead there, so I hated to see that come out.”

Getting the jump on fellow front row starter Tanner English of Benton, Ky., on the initial start, Erb immediately began to stretch his lead. Even after catching lapped cars, he seemed capable of running at his own pace, more than quick enough to continue to add to his advantage.

“We had to be careful there,” he said. “You run up on traffic real quick here, so it was pretty good to be able to get in there and weave in and out of that traffic and maintain our lead.”

English trailed Erb for half of the 40-lapper until Moyer took the spot away with a fourth-to-second move. Moyer moved to the outside exiting turn four and stayed there as they raced into turn one. With Gordy Gundaker and English battling on the bottom, Moyer passed them both as they raced out of turn two on lap 21.

“Everybody was guarding that bottom real bad and at that point my tires come in and everything was feeling good and I kinda kept moseying out a little at a time there, just trying to keep a little more momentum going and it worked,” said Moyer.

Moyer watched Erb pace the field for a dozen laps, unable to make up any ground.

“I was watching the whole time when I got to second there and them lapped cars kinda held him up and let me gain a little on him and then he got by them and kinda got some room and then they held me up,” Moyer said. “Then I got by them and we was both … it looked like we were pretty darn close to the same speed. I don’t know that I was really any better than him.

"And then after the restart I got real loose. I think it was getting better there, even on the last lap it got a little bit better, but I was just trying to hang on. I didn’t know how close the guy was behind me. I was just trying not to mess up.”

Moyer finally got the break he needed when Gundaker and English tangled getting into turn three, sending English around for a spin. Another yellow waved when Terry English stopped on the backstretch before a lap could be completed, so Erb again had to keep the tour's all-time winningest driver at bay for seven laps.

“Dennis was awful good,” Moyer added. “We had that restart and I don’t know … I think I had different tires than everybody else I guess. Woulda, shoulda, coulda. Maybe with a few more laps (we could have) let in come in and get going again I guess, but all in all, we’ll take second. We have that fifth-place area secured down and we want to get out of that and get back up toward that first couple.”

Pierce finished another 1.514 seconds back of Moyer and 2.653 seconds behind the winner. Still, his third-place run was his best Summernationals finish at Clarksville in four tries, topping the a pair of fifth-place finishes he had in 2013 and 2014.

“I’ve always had some bad luck here, but we’re also just not very good here,” said Pierce, who started seventh. “To get to third, I was pretty happy with that. Then the rest of the race I didn’t really want to slip out of line so I just kinda stayed on the bottom. I knew Babb was back in fifth and I knew all I had to do was beat him tonight to win the weekly points championship. So, heck we got that, and a third here, like I said, is like a win for us.

Notes: By finishing in front of Babb, Pierce did wrap up the second leg of the weekly points to grab a $2,000 bonus. Pierce trailed Babb by three points, but with a point differential of five each for the top six positions, Pierce knew all he needed was to stay in front of him. “To win the $2,000 for the weekly (points), that’s pretty awesome and I hope they keep doing it,” Pierce said. … Unofficially, Pierce, claimed the second week bonus money over Babb, Moyer, Erb, and Billy Moyer Jr. Bonus money is distributed through 10 positions. … Since finishing second in the Lucas Oil series Clash at the Mag June 17 at Magnolia Motor Speedway in Columbus, Miss., Erb has been on a tear. With the Lucas series on a hiatus, Erb has competed in the last five Summernationals races, with his worst finish being fifth at Tri-State Speedway in Haubstadt, Ind., on Sunday. During that five-race stretch, Erb has a pair of wins and a pair of runner-up finishes. “It’s been a good week for us. We’ve had our setups (right) every night and we’ve been consistent and that’s what it takes to run this series,”  Erb said. … With his second-place finish, Moyer was able to trim five points from Pierce’s series points lead. Pierce has 667 and lead by 14 points heading to Charleston, Ill., on Tuesday.

Sunny skies gave way to threatening clouds and cooler temperatures early in the evening. Mother Nature spared race fans and race teams, however, as the clouds broke up and missed the speedway. … The call was made for the UMP DIRTcar drivers to line up at 9:42 p.m. … Bobby Pierce gave a lucky fan a ride in a two-seater. … Drivers made their way around the speedway for their parade lap at 10:05 p.m.

Bob Gardner survived a caution-filled consy to win ahead of Jose Parga and Levi Ashby. Paul Stubber and Chris Shelton got together on the opening lap to bring out a caution and a complete restart. Both were able to continue. John Minon pulled off the track before the race was restarted. Scott Geaschel brought out a caution on lap two with a spin in turn four. Stubber brought out another yellow before pulling off the track.

Stepping up to the top shelf, second-starting Gordy Gundaker passed polesitter Shannon Babb as they raced into turn one and then ran around the rim to pick up a victory in the third heat. Babb settled for second. Ryan Unzicker fell back early, but rebounded to finish third, while Clayton Miller, who started sixth, grabbed the fourth spot. Rodney Melvin claimed the fifth and final transfer spot.

Tanner English pulled away from the father-son duo of Billy Moyer and Billy Moyer Jr., to win the second heat. Third-starting Moyer Jr. made it three wide on the start, but couldn’t make a clean pass on his father and settled back into the third position. English won ahead of Moyer, Moyer Jr., Terry English and Rusty Griffaw.

Dennis Erb Jr. blasted into the lead past Bobby Pierce on the first lap and paced the field the entire 10 lap distance. Pierce ran second until Brent Larson made a high side pass with two laps remaining. Larson finished second, followed by Pierce and David Seibers, who passed Dustin Nobbe on lap five. Nobbe held on for the final transfer spot. Caleb Ashby brought out the only caution when he spun in turn four on lap two.

Tanner English of Benton, Ky., is back in his family-backed machine tonight after driving a Steve Lampley-furnished car Sunday at Tri-State Speedway in Haubstadt, Ind. English was scheduled to start on the pole of the consolation race Sunday night, but scratched after breaking a shock on the car’s lift bar. … The Hell Tour’s lone Tennessee stop drew just three drivers — David Seibers, Caleb Ashby and Levi Ashby — from the Volunteer State. … Four of the Summernationals’ last eight Clarksville winners are on hand: Ryan Unzicker, Shannon Babb, Dennis Erb Jr., and Billy Moyer. Three of them will start from the pole of a heat race.

Clarksville Speedway hosts Monday's 11th round of the UMP DIRTcar Summernationals with a $5,000-to-win purse on the line at the 1/4-mile oval.