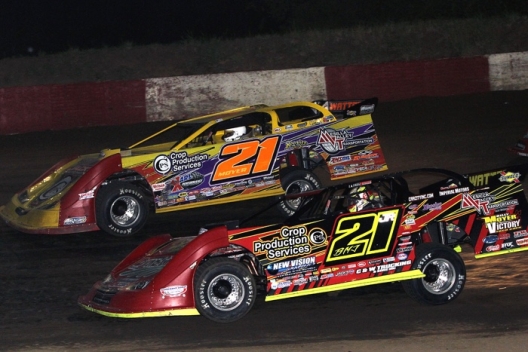 Thunderstorms that were dancing around Peoria finally struck with 20 laps of the scheduled 60-lap A-main completed, bringing an early end to the action.

Moyer Jr. was leading the event when heavy rain poured down, prompting officials to send the field to the pit area. With no hope of waiting out the storm, the evening's action was stopped just short of the halfway point that would have made the A-main official.

Though the feature didn’t reach the lap-30 mark required by rule for it to be an official race, UMP DIRTcar director Sam Driggers discussed the situation with Peoria promoter Jason Plumer and event participants and an agreement was reached to declare the event complete and distribute to participants the Hell Tour’s $5,000-to-win purse rather than the planned $10,000-to-win payoff.

The decision gives Moyer Jr. a $5,000 prize for his sixth career Summernationals victory. Details about how the Peoria decision affects the Summernationals points — notably the winner of the opening-week points battle sponsored by DirtonDirt.com that carries a $2,000 champion's prize — weren't included in the press release.

According to Driggers, the majority opinion among Peoria entrants asked about the event’s status was to checker the A-main at 20 laps rather than return to the quarter-mile oval to finish the final 40 laps. There was discussion of bringing the teams back to Peoria on Monday, but the racers expressed the desire to keep that as an off day for a break in the grueling Hell Tour schedule.

The thunderstorms that threatened the track as evening fell held off long enough for the feature to get the green flag at 8:23 p.m. following a four-wide parade lap.

Moyer Jr.’s father came off the outside pole to outgun his son for the lead at the start. The elder Moyer set the pace until Junior surged ahead to assume command on lap 15.

Bobby Pierce of Oakwood, Ill., also passed the elder Moyer for second place on lap 15 and was looking to mount a challenge on Junior when a caution flag flew on lap 17 for Roger Rebholz’s stopped car in turn two. Pierce stuck with Moyer Jr. on the restart before the brewing battle was stopped by the rain on lap 20.

Editor's note: Updates RaceWire with announcement that feature was declared official on June 19.

At 8:15 p.m., the Late Model feature field was sent on the track with light rain falling. As the drivers ran in the track, the precipiation stopped and at 8:20 p.m. — even with dark clouds around the track and lightning flashing in the distance — hopes were raised that the A-main might be able to get the green flag. ... The crate mod race was completed as rain began falling, but the precipitation intensified enough that the Late Model feature couldn't be lined up. There was no downpour, however, and as of 8:10 p.m. the rain had actually stopped — though lightning was still flashing and dark skies loomed — and officials were in a wait-and-see mode. ... All qualifying was complete by 7:30 p.m. With black clouds around the track and winds picking up, track officials did some quick track work before sending the 16-lap crate modified feature onto the track at 7:45 p.m. and moved the Late Model feature to second in the order after originally being third on the schedule. … The Moyers will share the front row for the start of the 60-lap feature with Billy Jr. on the pole and his father Billy on the outside. … Provisional starters are Gordy Gundaker, Jason Feger, Brent Larson and Roger Rebholz.

Brian Shirley overtook Jason Feger for the lead on lap two and went on to win the prelim by 1.465 seconds over Michael Kloos. Feger fell back to fourth before spinning on lap eight after contact with Chase Junghans; both drivers had to restart at the rear of the field.

Peoria’s weather has been dry and party sunny with temperatures in the upper 80s for most of the day, but the forecast calls for an increasing chance for thunderstorms as the evening progresses. Hot laps started at 5:30 p.m. CT and officials were planning to push the show along in hopes of beating possible rain. … After a broken carburetor booster caused a stuck throttle that sent Brent Larson hard into Sycamore Speedway’s third-turn wall during Friday night’s B-main, the Lake Elmo, Minn., driver is behind the wheel of his second Arnie Ranta-owned Longhorn car this evening. He said the badly wrecked machine is “going home tonight” with a team member who is bringing a brand-new Longhorn that is “95 percent done” to swap out so Larson can continue on the Hell Tour with two vehicles. … Peoria Speedway is a home game for Summernationals traveler Bob Gardner, who lives just miles from the track in East Peoria, Ill. He hosted fellow series regular Gordy Gundaker of St. Charles, Mo., and engine builder Bill Schlieper at his shop following Friday’s action at Sycamore. … Jason Feger of Bloomington, Ill., reported that his Longhorn car that was swept up in an opening-lap tangle at Sycamore appeared to have primarily body damage, but he’s running his Billy Moyer Victory Race Car tonight. … Kolby Vandenbergh of Ashland, Ill., visited the shop of a friend in Peoria to weld the broken left-front A-frame mount that broke during Friday’s action at Sycamore. His night at Peoria was short, however; motor trouble during hot laps forced him to scratch from further competition.

The UMP DIRTcar Summernationals stops for Round 4 at Peoria Speedway, a stalwart track on the Hell Tour for nearly two decades.

A Summernationals feature has been completed at the quarter-mile oval every year since 2000 except in ’03. This season the track has bumped the first-place payoff up to $10,000, making it the richest Super Late Model show in the facility’s history.

Bobby Pierce of Oakwood, Ill., was the winner of last year’s Summernationals A-main at Peoria. Other past victors of Hell Tour events at Peoria in tonight’s field are Shannon Babb of Moweaqua, Ill., Brian Shirley of Chatham, Ill., Jason Feger of Bloomington, Ill., and Billy Moyer of Batesville, Ark.