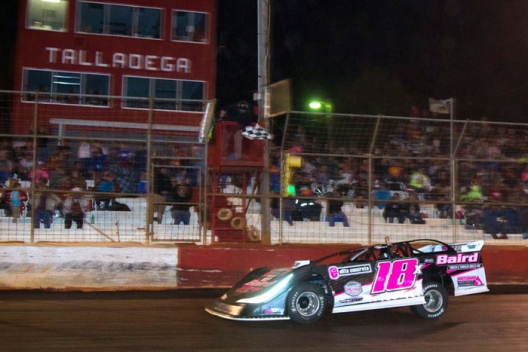 EASTABOGA, Ala. (Jan. 15) — Polesitter Michael Page of Douglasville, Ga., beat Brian Smith of Barbourville, Ky., into turn one on the opening lap and then survived a lap-49 caution, holding off Donald McIntosh of Dawsonville, Ga., at the checkers while leading flag-to-flag to earn his first-ever Ice Bowl victory and a $6,000 payday Sunday evening at Talladega Short Track.

Jason Hiett of Oxford, Ala., was third, followed by Smith and eighth-starting Jason Welshan of Maryville, Tenn.

Improving on his sixth-place finish from a year ago, Page led the full distance of the 26th annual event, keeping McIntosh at bay while relegating his fellow Georgian to a second straight runner-up finish in the January classic.

Page's debut in the Troy Baird-backed Sweet-Bloomquist car couldn't have gone any better. He set the overall fast time for the weekend, won his heat race and took care of business from lap one of the main event.

"(I thought) just let me get him on the start and then I'll be alright. Just stay calm," said Page, who knew going in that maintaining track position around the bottom of the third-mile oval would be key.

"I'm gonna try to get myself out front and set a pace where I don't get run over and just try to be smart and keep the car straight," Page said earlier in the day, admitting that negotiating backmarkers could prove difficult as well. "Lapped traffic is gonna be really hard. That's another thing; trying to get through lapped traffice without burning up our tires."

His only threat came early in the race amid lapped cars. Heavy traffic on lap eight allowed McIntosh to close the gap, but when Page slipped buy the backmarker of Scott Crigler, he was able to gain some breathing room.

A caution waved on lap 12, however, giving Page a clear track while forcing McIntosh to deal with Hiett. Hiett moved into second on the restart and held the spot for nearly 30 laps before McIntosh was able to repay the favor on a restart following the race's fourth yellow flag.

Though McIntosh gave chase, Page had clear sailing until the fifth-and-final caution, which flew on lap 49 when Shane Tankersley pulled up lame in turn two. That set up a green-white-checkered finish, which Page handled easily.

Notes: The race was slowed by five cautions. The first flew on lap 12 for John Ownbey. Brian Ligon brought out a yellow on lap 13 and the third caution waved on lap 31 when tight racing between Riley Hickman, Jason Welshan and Shane Tankersley resulted in a flat right rear tire for Hickman, who was running fifth at the time. Brian Conner and Tankersley brought out the final two cautions. ... 2016 Ice Bowl winner David Brannon of Elora, Tenn., was an early retiree after transferring to the feature through a consolation race. ... TST track champion Tim Roszell was the first driver out of the race.

Michael Page topped 50 cars in qualifying for the 26th annual Ice Bowl at Talladega Short track with a lap of 13.589 seconds around the third-mile oval and went on to win the first heat race Saturday afternoon. The heat race victory gave Page the pole position for Sunday's $6,000-to-win 50-lapper.

Other heat race winners: Brian Smith of Barbourville, Ky.; Donald McIntosh of Dawsonville, Ga.; Jason Hiett of Oxford, Ala.; and Will Roland of Jasper, Ga.

Page jumped ahead of fellow front row starter Riley Hickman of Ooltewah, Tenn., and kept the defending Southern All Star champion at bay through the duration of the 10-lap heat. Former Ice Bowl winner Tim Roszell, of nearby Anniston, Ala., finished third, to claim the final transfer spot in his heat.

Defending Ice Bowl winner David Brannon, of Elora, Tenn., finished fourth in the fifth heat and will have to transfer through a consolation race if he is to have a chance to repeat his 2016 victory.

Each of Saturday's five heat race winners started from the pole in their respective prelims on what was a bottom-dominant track.