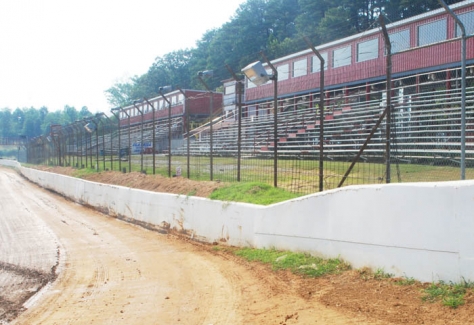 Fonzie always had a difficult time admitting he was wrong on Happy Days, but I'll come straight out with it. I was wrong.

It's easy to be prejudiced when it comes to racetracks you don't know much about, and when Clayhill Motorsports Park popped up on this year's UMP DIRTcar Summernationals schedule, I was a skeptic. The track in Atwood, Tenn., was too far from the series core, unproven in handling special events and had no history regarding top Dirt Late Model racers. Even the night before the event, I announced the series as making two trips to Atwood the following day: its first and last.

As Tanner English, who races in Clayhill's weekly Late Model division (with a $10,000 payoff to the season champion), said about driving up to the track, it's a little bit shocking to wind through western Tennessee's backroads and stumble onto such a nice facility.

On first blush, it's in the upper half of the dirt tracks DirtonDirt.com goes to in covering special events: two dozen skyboxes, attractive and comfortable (and quite full) grandstands on both straightaways, a nice layout with good sightlines along with a flat, organized pit area. Oh, and the air-conditioned bathrooms in the pits were a great refuge from brutal 95-degree weather.

I've never heard so many drivers consecutively use the word "beautiful" in describing a racetrack as I did at Clayhill. And these are Summernationals regulars who, after 10 races, are moody at best.

There was one catch. The racing in the 40-lap feature was lousy. It doesn't look too awful on the scoresheets because there were three green-flag passes for the lead, but virtually all 21 starters ran the rubbered-up strip at the bottom of the track throughout the race. Only Shannon Babb's miscue in slipping out of the groove allowed Billy Moyer to pounce with five laps remaining for the victory.

Whatever the case, the out-in-the-sticks facility is certainly worthy of a better race, and it looks like it'll get another shot on next year's Summernationals. As Nelson joked at the drivers' meeting, now that the teams have found it once, they'll be able to find their way back. Here's hoping more than four Tennessee drivers will be among those on hand in 2010.

There are no comments