Can you keep a secret? Good, because this is a little tricky. I'm allowed to publish said secret, but it's your job to help make sure a certain racer's parents don't get wind of it. | Berck takes aim at Speedweeks

Kyle Berck of Marquette, Neb., the two-time and reigning O'Reilly National Championship Racing Association champ, is busily preparing to make his second career racing trip to Florida Speedweeks. He'll be driving down next week to arrive for practice at East Bay Raceway Park near Tampa, MORE

If you happen to be cruising the East Bay Raceway Park pits during Florida Speedweeks, think twice before walking up and cheerfully greeting a driver with "How's it going?!?"

The answer, accompanied by a pained look, might be "awful." That's because plenty of drivers — including some of Dirt Late Model racing's best — have a miserable week each February at the third-mile Clay by the Bay, one of the trickiest ovals in dirt racing. 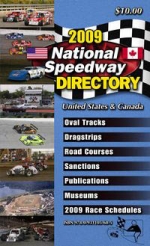 After the time-consuming, painstaking process of updating the National Speedway Directory each year, publisher Allan Brown always knew there came a time when the book simply had to go to press. Plenty of last-minute details were always added — and bits of information would be outdated within weeks of publishing — but the deadline beckoned so the directory could appear each spring.

"If you were a perfectionist," the Comstock Park, Mich., resident said, "you couldn't do this job, because you'd MORE