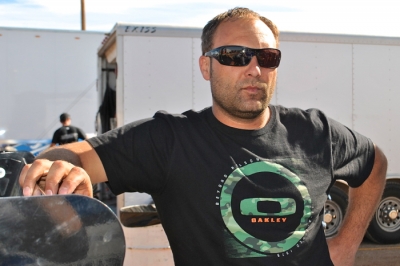 Donny Schatz is making his Winter Extreme debut this week at Tucson. (DirtonDirt.com)

TUCSON, Ariz. (Jan. 16) — When Donny Schatz goes to a racetrack, he usually ranks as one of the most experienced competitors on the entry list. But this week at Tucson International Raceway, the five-time World of Outlaws Sprint Car champion might as well be a rookie.

Schatz of Fargo, N.D., has raced Late Models before with success. He scored victories last season on the Northern LateModel Racing Association for spec-engine Late Models in the upper Midwest and also finished fourth in his only appearance at Eldora Speedway’s Prelude to the Dream event for NASCAR and celebrity racers.

But when it comes to open-engine Late Model competition against full-time Late Model drivers, this week’s Winter Extreme action is his first real foray.

“I’ve got a little bit of Late Model experience, but here you’re racing with some great drivers,” said Schatz, who on Sunday started his week at Tucson roughly 24 hours after winning a sprint car race in Australia. “They know how to push these things to the edge, and I don’t know how to push it to the edge quite yet.”

Racing in two of the three Winter Extreme events held so far, Schatz has looked a lot like a talented rookie. He’s shown flashes of the natural talent that has helped him become one of the country’s top sprint car racers, while at other times he’s struggled.

After failing to make Sunday’s second round feature, Schatz rebounded by setting fast time overall during qualifying for Wednesday’s round three action. The fast time put him on pole for a heat race. He again struggled in dropping back to third early in the 10-lap prelim, but recovered to finish second and qualifying for Wednesday’s 30-lap feature.

The main event was another strong showing by Schatz. Starting seventh, he battled among the top 10 with Late Model standouts Jimmy Mars, Shane Clanton and others before settling back into seventh in the closing laps.

“The pressure was on there in the heat race,” Schatz said. “I tried not to make mistakes, but obviously I made some. But I made less and less every lap. In the feature I just couldn’t get going on the restarts. I got stuck outside, and couldn’t quite figure out how to get the car around there like some guys could.

“All in all, we had a pretty respectable night. I just look forward to making more laps throughout the weekend, and hopefully things keep getting better.”

Schatz’s trip to Tucson, which will continue with a tripleheader Friday through Sunday to wrap up the miniseries, is not only a opportunity for him to finally compete against some of Dirt Late Model racing’s top drivers, but also an chance to continue his development in full-fendered racing.
While he’s has quite a few Late Model races under his belt between his NLRA action last year, the Prelude and Tucson, he’s still adjusting to the vast differences between Late Models and sprint cars.

“It’s totally different,” Schatz said. “There’s some things in the way that you build the cars that can correlate somewhat, but our suspension on the sprint cars is torsion bars and this is coil springs. The shocks aren’t anywhere near each other and the corners that are important are totally different.

“It’s just a different style of racing. It’s a lot different on my body. It’s a lot harder on your body running one of these than a sprint car. But I had a lot of fun, and that’s what we’re here for, so hopefully we can build on that.”

While he hopes to get as much seat time as possible in a Late Model, Schatz won’t be racing Late Models full time any time soon. In fact, with nearly 100 sprint car races planned this season, it would be more accurate to say his Late Model racing will be done on a very limited basis beyond Tucson.

“Yeah, I’d like to get out and race more, but we’ve got 92 races with the sprint cars,” said Schatz, who races for Tony Stewart’s sprint car team and owns his own Late Model equipment. “That’s my 100 percent focus and this is more for fun. I’m gonna go where I can and do what’s feasible. And as long as it stays fun I’ll keep doing it. If it gets too serious then you’ll never know what’ll happen.”

But even if Late Models aren’t his full focus right now, he still wants to be as competitive as possible any time he shows up at a Late Model race.

“I don’t know that I’d be able to go and contend for a World of Outlaws (Late Model) championship by any means,” Schatz said. “But I’m a competitive person and believe me I want to be competitive. I want to be able to come here and win races, but it took me 10 years to figure out how to race sprint cars at the level I do today.

“So yeah, the ultimate goal is to get better at it, but I wouldn’t say I’m gonna have a career change and come and run the these full time. But it’s fun and as long as it stays that way I’m gonna continue to do it.”