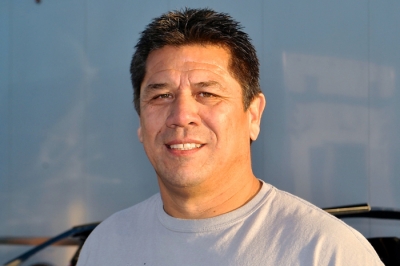 Don Shaw hopes to start 2014 with a strong performance at Tucson. (DirtonDirt.com)

TUCSON, Ariz. (Jan. 10) — Don Shaw knows from experience that success during January’s Arizona racing bodes well for the rest of the season.

In 2013, Shaw, of Ham Lake, Minn., scored one of the biggest victories of his career at Central Arizona Raceway in Casa Grande, Ariz., and followed it with one of the best seasons of his career. He’d like to claim more Arizona success this week during Tucson International Raceway’s six Winter Extreme miniseries.

“These guys we’re racing against out here are some of the best in the sport,” said Shaw, who was one of more than 50 drivers to make laps during Friday’s Winter Extreme practice session at Tucson’s 3/8-mile oval. “Any time you can win against these guys, it’s a big confidence booster. I think that really got us going for the whole year last year. We just kept it going all year and ran good back home.”

Shaw topped national touring stars Billy Moyer and Tim Fuller to win last year at Central Arizona, but he’d like to one-up that performance this year in Arizona with a victory at Tucson’s Winter Extreme miniseries, which kicks off Saturday with a $3,000-to-win non-points race for the National Dirt Racing League and includes five more races before concluding Jan. 19. But Shaw knows winning at Tucson won’t be an easy task.

“It would be a tough deal to win one of these races,” Shaw said. “Those were some tough guys we won against last year, but there’s a lot more quality cars here this year.”

Along with his confidence from his Arizona victory last season, Shaw will also be boosted at by a Championship Dirt Motorsports victory at Tucson in October. Shaw, who frequently makes trips to Arizona to race at Tucson, hopes that experience will help him in Winter Extreme action.

“We ran here at the end of October and I won one, so maybe we can run like that again,” Shaw said. “I think it always helps to run this track. It was a very dry track, compared to what it was last year (at the Winter Extreme). I think they’re gonna keep it a little drier this year, so I’m hoping that’ll help.”

Much like Shaw’s Arizona victory foreshadowed more success in 2013, Chris Simpson of Oxford, Iowa, also went on to have a solid season after winning out West in January of last year.

Simpson scored his victory at Tucson, topping a 50-car field for to earn $5,000 for one of the biggest victories of his career.

“We started off real good with the win out here and really had a pretty good year going until about the time we won that Summernationals race,” said Simpson, who later added a $10,000 payday for his first career UMP DIRTcar Summernationals victory in June.

Simpson went through a bit of a slump through the second half of 2013, but he rebounded to close out the year with back-to-back victories in Lucas Oil MLRA action at Lakeside (Kan.) Speedway and an unsanctioned special at West Liberty (Iowa) Speedway.

Simpson will look to pick up where he left off at the end of 2013 when the Winter Extreme gets rolling on Saturday.

“We’re excited to get back going and hopefully have another good year,” Simpson said. “We learned some stuff at Lakeside and West Liberty that was pretty good that we think should help us out here.”

Two-time World of Outlaws Late Model Series champion Darrell Lanigan of Union, Ky., is attending Tucson’s Winter Extreme action, but he’s not doing so as a driver. Lanigan is spending his time in Arizona helping a number of his clients as they debut the new cars he built with veteran crew chief and setup guru Ronnie Stuckey.

“It’s definitely a new feeling, and it’s a different exciting,” said Lanigan, who likely won’t debut his own new Club 29 car until Speedweeks in February. “I gotta look at it at from a different side. It’s my business, so it’s interesting to see what you build and hopefully see them run good for these guys.”