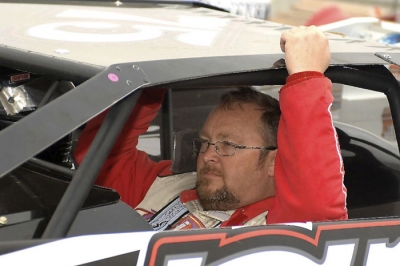 Terry Phillips is adjusting to a new race car in Tucson. (photofinishphotos.com)

TUCSON, Ariz. — As the winningest driver in Wild West Shootout history, Terry Phillips always gets plenty of attention at USA Raceway. This January his red No. 75 is drawing even more eyes as the six-time MARS DIRTcar Series champion from Springfield, Mo., debuts a Bloomquist Race Car.

Phillips got caught up in an accident in Saturday's feature, but he switched to his backup car Sunday and finished 11th. The 45-year-old driver wasn't expecting immediate victories, but he's happy with the progress of the new chassis.

"A lot of people expect you to just get in it and go fast," Phillips said Sunday. "I knew, I've been around a long time, that it takes a little bit. Plus it's so different from what I'm used to, it's just a whole new ballgame."

Phillips has shared frequent phone calls with Scott Bloomquist, the Hall of Fame chassis builder and driver, even though the Tennessean has been under the weather.

"We've talked about this before: It might not be a deal where I jump in and be Scott Bloomquist. I feel we'll get there. It's just going to take a little time and that's why we're here," Phillips added. "I think we'll get it pretty quick, especially when I get to tracks that I race on."

Phillips has worked with Bloomquist's baseline setups while they've discussed throwing changes at the car for the Tucson oval, where Bloomquist has never raced.

"I've listened to what he's said to do. He set it up out in Tennessee and he's just having me try different things and stuff, and I've been talking to him every time we go out," Phillips said. "Thanks to him, we got going a little better, and I've kind of thrown a couple of ideas in ... it's nice to have somebody that race and drives them himself to work with, you know. It's pretty exciting for me. So I think our process is moving along pretty quick."

Phillips is pleased with the traction, but it's taken some adjustments getting accustomed to the steering in the Bloomquist car.

"We're going to catch up, or we're going to have a crash course before long," Phillips said. "I just want to get out here and get some laps and get a feel for what I'm feeling, and at home, most of the times you win those races at the house, so I'm getting an idea of what I'm feeling and like and dislike and work on that.

"I'm real excited. I still pumped up as I was. I know we ain't won every race ... (Sunday) the car felt better. We're making pretty good strides pretty quick, really. Two races, two different cars, and we sped it up a whole bunch, let's put it that way. I'm pretty excited."

No bull from Mars

Doing a little sightseeing on his racing trip to Arizona, Jimmy Mars of Menomonie, Wis., made the trip to nearby Tombstone to check out the town where there was a real-life Wild West Shootout in 1881.

The 39-year-old Mars checked out a dramatic recreation of the Gunfight at the O.K. Corral (the Doc Holliday character was his favorite), shopped for cowboy boots (he couldn't find any that fit correctly) and found something he considered buying for his race car — a huge set of bull horns to affix to the .

"Sitting in the pits, that would look pretty cool," Mars said Wednesday, assuring a reporter he wouldn't attempt to compete with such a contraption.

Although Mars joked about putting something atop his hood, things truly are different under the hood of his white No. 28 for the 2012 season. He's made the switch to a Roush Yates Ford powerplant, and so far he's pleased with the change. It's the first time he's run a Ford in open-engine competition.

Mars, a four-time winner at the Wild West Shootout, posted a pair of fourth-place finishes on the weekend, the only driver to be in the top five in both races. His car is just a tick away from being a winner.

"I could've run second as easy as I ran fourth" in the opener, he said.

Back to Ol' Faithful

Tucson's USA Raceway isn't exactly a familiar place for Ray Moore — "Most of the tracks I race on are the size of the go-kart track in the infield," the Louisiana driver joked Wednesday — but he found success at the oversized 3/8-mile oval last year, making five of six features and posting a third-place finish.

The first weekend of this year's Arizona miniseries didn't go as well for the 30-year-old Moore, a former O'Reilly SUPR champion who had one of the best seasons for drivers in the Deep South last season with 11 victories, including a stretch of five in a row.

The team was testing a new MB-2 Customs chassis Saturday and Sunday with a new front end, but Moore was never a factor in a transfer spot. His best prelim finish was sixth, so he decided to go back to his Ol' Faithful MB-2 that he ran most of last season.

"We just couldn't make it work," Moore said Wednesday before heading to the nearby airport to pick up his wife. "Instead of (making changes and) trying to overcompensate for the front end, we decided to park it."

Moore will have to compensate for different racing conditions Wednesday, as well, because WWS action switches from daytime to nighttime action. That likely means faster racing conditions on a track that's plenty fast all the time.