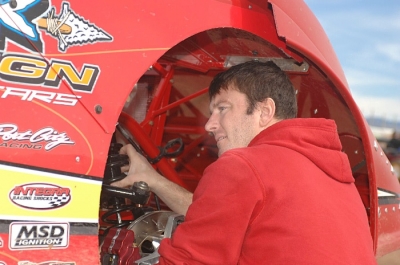 TUCSON, Ariz. (Jan. 14) — After making an off-season switch to Warrior Race Cars, Tim McCreadie knows he has a long way to go in 2012. But the former World of Outlaws Late Model Series champion from Watertown, N.Y., is happy with the team's start after a fifth-place finish Saturday in the opening event of USA Raceway's sixth annual Wild West Shootout.

After climbing from his car — and barking a quick request to engine builder Bill Schlieper for the $20 bill owed him via a friendly water on the Patriots-Broncos NFL playoff game — the 13th-starting McCreadie talked about the steady improvement throughout the night. | Complete WWS coverage

"We were good. We've just gotta tweak it. We made big gains all night long and it's very comfortable to drive," said the 37-year-old McCreadie, who made his second chassis switch within 12 months in going to the Sanford Goddard-designed car. "It's one of those deals (where) if we draw a bad pill like we did today, it's not going to stop us from running out front like it did last year. So that's a good feeling.

"To start in back, I don't think anybody passed as many cars as we did, so that's a good feeling to be able to catch some guys and race with 'em. It's been a year or two."

Fuel pressure problems in Friday's practice limited McCreadie's track time on his first visit to Tucson, putting them a step or two behind entering Saturday afternoon's action. But McCreadie rallied from 10th to fourth in his heat race, then dominated a consolation race to earn a spot in the main event.

McCreadie jumped into the high groove at the start of the feature, working his way up to seventh before settling down lower on the track. But even McCreadie's problems in the race — the car pushed exiting the corners on the harder tires — can be labeled a positive.

"It did everything right through the middle (of the corner). The problem was, on throttle, it has too much drive, too much drive, I need to fix that," McCreadie said. "That's usually a good thing to have is too much. You can always dial it down — usually you can't find it is the problem. So in my mind, it's a success. The car's in one piece and we started midpack and drove up through there. And it's not like this is a cakewalk out there. Hopefully we'll keep going with it."

Frank Heckenast Jr. was pleased with how fast his No. 99jr Rocket Chassis was Saturday at USA Raceway, but the 23-year-old Frankfort, Ill., driver knew he missed a golden opportunity when had a couple of run-ins with a pair of infield tire barriers that ended his race.

His white car ended up with extensive front-end damage that left crew members, including crew chief Austin Hargrove, making repairs after the 30-lapper.

"My crew guy is probably going to quit," Heckenast said. "He just spent three months putting that thing together and I destroyed it."

The infield-hugging Heckenast started ninth and was up to fifth after a lap-13 restart when he ran into trouble.

"I was getting closer and closer to that (turn-two) tire, and I knew eventually I was going to hit it. I nicked it, I nicked it coming out of (turn) two, and it broke the brakes and steering and I just could not stop, steer — and I blasted that other (tire) down here (in turn three)." He concluded the recounting with one word: "Horrible."

Still, he was able to see the positives of running well on a night when a stout field of 69 Super Late Models jam-packed the pits.

When seventh-starting Jimmy Mars of Menomonie, Wis., tried to work under fifth-starting Will Vaught of Crane, Mo., near the race's midpoint, there was a little rubbing going on that culminated when the No. 28 of Mars wheel-hopped in turn four in a battle for third.

Mars took a moment to regroup and was never that close again while Vaught was able to move up and battle with Shannon Babb of Moweaqua, Ill., taking the second spot for good on the final lap.

The contact rubbed Mars wrong, but Vaught said he didn't intend to force Mars into the infield.

"I never saw Jimmy," said the 25-year-old Vaught, adding that he thought he bent a tire rod in the exchange. "I'll apologize to him after the races. It's hard to see when the car's all rocked up, and I wasn't blocking. If he's faster than me, he could've passed me. It's one of them deals."

Mars ended up settling for fourth after surviving the tangle with Vaught along with a brush with an infield tire barrier.

"I was trying to get by Vaught there on the back straightaway, and apparently he was just going to make sure he was going to the bottom whether I was there or not — so whatever," Mars said. "We jumped tires there a little bit. I'm just thankful we got fourth out of it. It was kind of a raw deal there, but whatever. We've got a long ways to go and the car's pretty much in one piece, so we'll keep rolling with that."