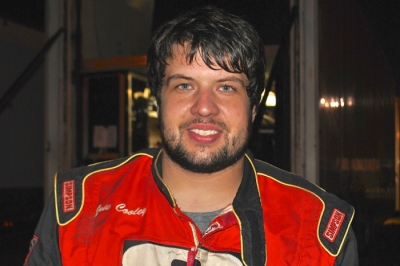 COLUMBUS, Miss. (Oct. 11) — Eric Cooley of Fulton, Miss., will look to turn his solid season at Magnolia Motor Speedway into a great Saturday night when he leads the field to green for the $20,000-to-win Cotton Pickin’ 100.

Cooley, who won four out nine Super Late Model events he entered at Magnolia’s 3/8-mile oval this season, led every lap of the first of six heat races during Friday’s Cotton Pickin’ 100 preliminary action to earn the pole starting spot for Saturday’s 100-lap main event. He’ll race for a career-high victory in the unsanctioned special event, but he’ll have to hold off one of the sport’s best drivers to do it with defending race winner Jimmy Owens set to start second. Notebook | Sidebar | Video | Slideshow

“We’ve had a good car here all year. I just hope it continues one more night," Cooley said of his No. 33 Bryson Motorsports entry. “To be able to finish with a great run at our home track, it would just be awesome for us. But we’ve definitely got a tough competitor starting beside us and four other cars behind us that are all pretty good too.”

Owens of Newport, Tenn., will start alongside Cooley after topping the second of Friday's two qualifying groups and claiming a flag-to-flag victory of his own in the fourth heat. Friday's four other heat race winners — Chris Brown of Spring, Texas; Randy Weaver of Crossville, Tenn.; John Blankenship of Williamson, W.Va.; and Morgan Bagley of Longview, Texas — will fill the remainder of the top three rows for Saturday's feature. Eighteen of the event’s 52 entries earned feature starting spots through Friday’s action. Three consolation races on Saturday will each transfer the top two finishers to complete the 24-car starting field.

“The car felt really sporty tonight,” said Owens, who entered the weekend fresh off clinching his third consecutive Lucas Oil Late Model Dirt Series championship. “We felt really maneuverable. All those guys who won heats are tough, but I think we have a pretty good shot at going out there and winning this thing again.”

Starting second in Friday’s first 10-lap heat race, Cooley outdueled polesitter and overall fast qualifier Neil Baggett of Shannon, Miss., to claim the prelim victory. The two home-state drivers battled side-by-side through the race’s opening laps before Cooley finally pulled ahead on lap three. Cooley pulled away through the remaining distance while third-starting Josh Putnam of Florence, Ala., and sixth-starting Jamie Tollison of Kosciusko, Miss., also got by Baggett to claim the race’s other two transfer spots.

Making his first Late Model appearance in more than a year, Brown cruised from the pole to win heat two by more than a straightway over Jack Sullivan of Greenbrier, Ark., Chase Washington of Houlka, Miss., who charged from fifth and seventh respectively to claim feature starting transfers.

The pole-starting Weaver jumped out to a half straightaway lead over second-starting Bobby Pierce of Oakwood, Ill., early in the third heat and maintained the advantage as Pierce picked up the pace through the second half of the 10-lapper. Pierce, the 16-year-old son of Hall of Famer Bob Pierce, settled for second in making his Magnolia debut. Clint Smith of Senoia, Ga., moved up two spots from the fifth starting spot to also make the feature.

Owens, who topped the second of the night’s two qualifying groups in time trials, turned back an early challenge from fellow front-row starter Billy Moyer Jr. of Batesville, Ark., in heat four. Moyer faded late in the race and held off seventh-starting Jason Fitzgerald of Jacksonville, Fla., for second. Fitzgerald, making his first Super Late Model start since 2008 in the GRT Race Cars house car, settled for third to also make the main event.

Starting from the pole of the sixth and final heat race, Bagley cleared second-starting Wendell Wallace of Batesville, Ark., on lap three on his way to a convincing prelim victory. Fighting a loose race car, Wallace lost the second spot to Chris Wall of Springfield, La., on lap five and was in danger of losing third to a hard-charging Dane Dacus of Lakeland, Tenn., before a late caution allowed him to retake second from Wall, who settled for third.