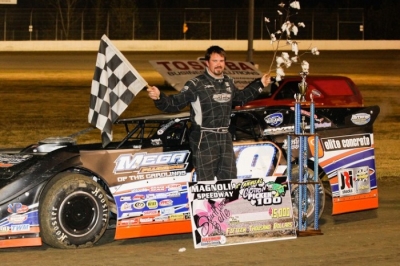 Jonathan Davenport enjoys the spoils of victory at The Mag. (foto-1.net)

COLUMBUS, Miss. (Oct. 29) — When your hot, you're hot. Right now, that’s exactly what Jonathan Davenport is.

Making the most of late-race caution, the Blairsville, Ga., driver vaulted from third to first to recapture the lead in the eighth annual Southern Belle Cotton Pickin’ 100 at Magnolia Motor Speedway. | Notebook | Slideshow | Video | Prelims

Once he was back in front, Davenport drove away uncontested after the caution to pick up his second $15,000 payday in as many races., Davenport was one of few drivers able to take advantage of the race’s lone caution, which flew on lap 63 when race leader Billy Moyer of Batesville, Ark., made contact with the car of Senoia, Ga., driver Clint Smith, sending Smith spinning on the backstretch.

On the point of the double-file restart, Moyer, who had led since passing Davenport on lap 41, never managed fine the same pace he had when leading. Scott Bloomquist, of Mooresburg, Tenn., was second on the restart, but he couldn't take advantage when went back to green.

That opened the door for Davenport, who took advantage and drove his Barry Wright Race Cars house car by both of the hall-of-fame drivers to reclaim the top spot and the win.

“I thought that they would fire right back off,” said Davenport of Moyer and Bloomquist. “They were blowing just enough grit up the track that I couldn’t really run the middle like I wanted to, and I just couldn’t run the bottom like those guys could.

“After the caution, the grit was run in enough that I could run in the middle. Then I settled down and got in a rhythm and just started worrying about what I was doing. The lapped cars is what messed me up. When I got in the traffic, I was too worried about trying to catch them at the right spot to pass them.”

That’s one thing that Moyer never found while he was trying to lap Smith. Moyer trailed the 16th-starting Smith for nearly 20 laps but could never get by. With his car stuck right around the hub, Smith never budged. Holding his line tight to the inside of the track, the former Southern All Stars champion felt as though he couldn’t get much lower on the track.

But after turning back advances from Bloomquist near the halfway point, Moyer decided he needed to get by. The two drivers made contact exiting turn two, resulting in Smith’s spin.

After the yellow flag, Fayetteville, Ga., driver Shane Clanton restarted seventh and rallied to a runner-up finish. Moyer faded to third, while Bloomquist was fourth and last year's winner Brian Birkhofer of Muscatine, Iowa, was fifth.

Moyer wasn’t happy with the way he lost the race.

“I can’t count on my hand how many times I’ve lapped that guy and he never gives you a break,” Moyer said. “I tried it (in the middle) a lap or two laps and it didn’t feel right so I came back to the bottom so I wouldn’t get passed by somebody on the inside. Maybe I should have ventured up a little higher, but that was my game plan, to run the bottom.”

What Moyer wasn’t aware of is that once he followed Smith through the gaggle of lapped traffic at about the halfway mark, he had finally gained some breathing room on Bloomquist and Davenport. Had he decided to just ride behind Smith to the finish, there’s a reasonable chance that he’d been able to hang on to win.

“Yeah, I know that now, but it’s probably a little too late now,” Moyer said. “They told me that I had a little bit of a lead, but I didn’t know it.”

In a race that had its share of three-wide racing in the early stages, the single caution flag was a game changer. While Davenport and Clanton headed toward the front, others faded much like Moyer and Bloomquist. Dennis Erb Jr., was running fifth on the restart, but fell to eighth at the finish. Jared Landers did all he could to maintain his seventh place finish and Birkhofer slipped from fourth to fifth as Clanton scooted past.

Notes: Davenport’s Barry Wright Race Car is sponsored by Baird Transports, Mega Plumbing, Elite Concrete, En Compass Solutions, JRI Shocks and Nicholls Plumbing. ... Davenport became the second driver in as many years to sweep the Coors Light Fall Classic at Whynot Motorsports Park in Meridian, Miss., and the Southern Belle Cotton Pickin’ 100. Brian Birkhofer accomplished that feat last season. ... Moyer was the only driver in the field eligible for a $3,000 bonus if he won because he entered all three of Mississippi’s biggest races this season — the Magnolia 100, the Coors Light Fall Classic and the Cotton Pickin’ 100. ... The race was the final scheduled event for Holden, La., driver Chris Wall, who recently announced his retirement. His last ride ended on lap 26 when he pulled to the infield. ... David Breazeale, another driver who has stated his plans to step away from racing for a while, had a disappointing finish as well. His Henderson Motorsports-back machine was credited with 21st. ... Overall fast qualifier Chase Washington made the feature through a consolation race; he started 23rd and finished 14th. ... Clint Smith changed an engine after Friday’s prelims. ... Neil Baggett won the 30-lap, $2,500 NeSmith Crate Late Model race. There were 50 Late Models in that division. ... On a chilly fall night, the race was in the books by 9:35 p.m.