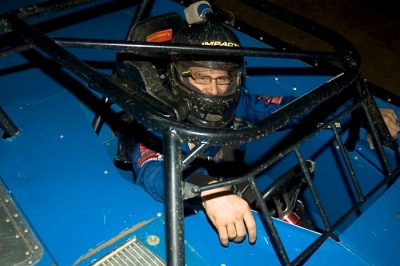 Josh McGuire is buckled in for the topless event at Brushcreek. (Rich Edwards Jr.)

Carrier, who has five special event victories in the Buckeye State this season, won the first of four heat races during Friday night’s preliminary action at the 3/10-mile racetrack. The double-feature event will pay $8,000 to the winner of the Saturday night’s first 50-lap feature, with $12,000 going to the winner of the finale. | Slideshow | Video

In an event that drew just under 40 race cars, other heat race winners were: Jacob Hawkins of Fairmont, W.Va., Chub Frank of Bear Lake, Pa., and Shane Clanton of Fayetteville, Ga.

The four heat winners put themselves in good shape for the Saturday night’s first feature, but if they finish up front in it, they’ll have to work much harder to do the same in the nightcap. The finishing order from the first event will be inverted completely for the second race, meaning the winner of the first feature will start from the tail of the second.

The third-starting Carrier, who split $7,500 victories with Rod Conley in last year’s Billy Bob, moved to second on the start of the first heat and stalked polesitter R.J. Conley of Wheelersburg, Ohio, for the first half of the 10-lap race. Using the low groove off of turn four, Carrier pulled alongside Conley as the leaders completed lap five and made the winning pass entering turn one.

Carrier led the final half of the race to take the prelim victory over Conley, and Chad Smith of Dayton, Ohio. Ross Robinson of Georgetown, Del., and Zack Dohm of Cross Lanes, W.Va., were fourth and fifth in a race that transferred the top five finishers to Saturday’s main events.

Starting from the pole, Hawkins grabbed the lead over Warren, Pa., driver Ron Davies on the start of the second heat and dominated the entire distance. Hawkins scored the victory by nearly a straightaway over Davies and Shannon Thornsberry of Martin, Ky. Also transferring were Audie Swartz of Mindford, Ohio, and Steve Kester of Holland, Ohio.

Coming off a $13,000 victory at McKean County Raceway, second-staring Frank pulled ahead of polesitter Dave Hess Jr. of Waterford, Pa., on the initial start and cruised to a comfortable lead in winning the third heat race. Greg Johnson of Bedford, Ind., was third with Josh McGuire of Grayson, Ky., and Rod Conley of Wheelersburg, Ohio, finishing fourth and fifth.

Clanton outdueled Tim Dohm of Cross Lanes, W.Va., on the opening laps of the fourth and final heat race on his way to taking the victory over Jason Jameson of Lawrenceburg, Ind. Dohm was third at the finish with Jackie Boggs of Grayson, Ky., fourth. Anthony Adams was the final driver to transfer to the main events through heat race action with his fifth-place finish.

Consolation races Saturday will transfer more cars into the feature races. Complete inversion of the finishing order in the first race will determine the starting lineup of the second feature. Saturday’s action will also include a main event for open-wheel modifieds. The winner of that races chooses between a $10,000 payday or a new Harley-Davidson motorcycle.