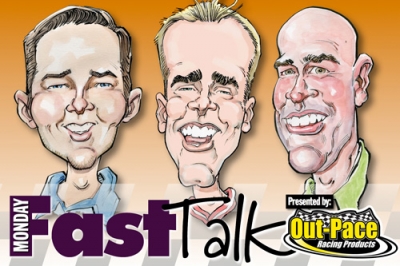 Todd Turner: While the rest of us jealously grumble while checking the Tucson weather forecasts — 75-degree highs and absolutely no chance of rain for the remainder of the Winter Extreme — let’s dive into how things have gone in Arizona following two of six NDRL non-points races. | Complete Winter Extreme coverage

Let’s start with hometown driver R.C. Whitwell dominating the opener in becoming the first home-state driver to win in January’s all-star action. Often fans think of the West Coast guys as having less equipment, experience and talent, but those of us who’ve seen Whitwell know better. Quite an impressive performance, wasn’t it?

Joshua Joiner: It was absolutely a great performance for Whitwell. He's proven before that he capable of competing with anyone when they come to his home track, and this week — with his victory Saturday and a fifth-place finish Sunday — he's showing that he's one of the event's top contenders.

Michael Rigsby: It was simply a matter of time before Whitwell got one of these wins. People can grumble about the invert putting him up front, but the fact is R.C. has been dangerously close to winning a Tucson race for a long time, and was finally able to put his Rocket Chassis in victory lane. As far as the West Coast thing, he's obviously one of the best West Coast guys, and when you look at his ability and equipment, he'd fit right in anywhere in the country. They've caught up out here … and here’s a shoutout to Tony Toste, who we didn't get to interview last night cause he'd already flown back! Another great run for a West Coast guy.

JJ: Whitwell's victory has been part of an impressive start to the miniseries for West Coast drivers. Whitwell's fifth-place finish Sunday was one of three top-five finishes for Western drivers with Tony Toste nabbing an impressive runner-up finish to Billy Moyer Jr., and Clay Daly finishing fourth. The Western drivers as a whole are showing they're capable of competing with the Eastern invaders.

TT: On to Sunday’s $5,000-to-win show, Billy Moyer Jr. clicked off his second career victory at Tucson as the benefactor of the engine failure for early leader and fellow front-row starter Terry Phillips. Perhaps the biggest news is that it provides a high-profile victory for Longhorn Chassis, Bobby Labonte Racing’s in-house program that’s now collaborating with Hall of Famer Billy Moyer and his son. Longhorn designer Kevin Rumley is in Tucson. Did you get a feel for how pleased that group is?

MR: Pleased? I'm not sure that's the word. Try "doing backflips.” They really feel like they have something here (and they just might) as right out of the box the entire group, from Kevin to Billy and Junior, are all raving about things. Let's obviously pump the brakes — it's only one race — but you'd rather start on a hot streak than not. The rest of Arizona, and then Georgia-Florida Speedweeks next month, will be telling.

JJ: Like Michael said, I'm sure they're more than pleased. The Longhorn program has made a lot of improvements over the past two years, but I think we're seeing early on how tough they can be as the program continues to grow. Also, great run for Moyer Jr. I don't think very many people would've picked him to win a race in a Longhorn before his father did.

TT: For those of us watching DirtonDirt.com’s pay-per-view from afar, are there any drivers or developments that have caught your eyes off-camera? As we've mentioned, Tony Toste obviously surprised with Sunday’s runner-up finish, and John Blankenship has twice set fast time in his first weekend at Tucson. What jumped out for you guys?

JJ: Chase Junghans had a nice run Saturday night and started out well Sunday by setting fast time in his group. He faded from there and missed Sunday's feature, but for his first two nights in a Capital Race Car, I'd say he's running pretty well. ... Jimmy Mars seems to be getting 2014 started out on the right foot after a subpar 2013. I wouldn't be surprised for him to win at least one of the final four races. ... Meanwhile, Chris Simpson, who won a race last year during Tucson’s first weekend, has struggled a bit, but I expect him to get things turned around before the end of the week.

MR: It seems to me the parity level across the board has been pretty good. It seems pretty even every night, but the invert is also playing a factor in that. We'll see how things shape up on Wednesday's typically-heavier race track. I think car count and qualitywise it's one of the best fields Tucson has ever had, and that's part of the reason as well. There have been some guys struggling that you thought might do well, and vice versa too. Obviously Will Vaught was on the move with his 13th-to-third run Saturday, and like Joshua said, it’s good to see Mars back in the hunt consistently.

TT: Tucson takes a few days off after after a pair of twilight and afternoon races with a full-fledged night race on tap for Wednesday. Tucson’s 3/8-mile oval always allows high speeds, but that amps up even a bit more for the night-time shows that are always exciting. Any thoughts on what fans should look for under the lights?

MR: From strictly a fan’s perspective, Wednesday night is "the show.” It's hammer-down, elbows up, and usually provides the wildest and craziest race of the week. It's a 30-lap sprint that's over in a hurry, and someone's feelings are usually hurt. Like I said, fans love it. Drivers? Ehhhh … not always as crazy about it.

JJ: While the speeds will definitely pick up Wednesday night, I wouldn't expect to see the contenders change too much. If I had to pick a winner for Wednesday night, I'd go with Will Vaught. He was great on a hammer-down surface in last year's midweek race, and he's already impressed here this week with his rally on Saturday.

TT: All good things must come to an end, and so it does for Joshua with this week’s Fast Talk. He’s moving on to another job and we’ll miss him here at DirtonDirt.com. Any parting thoughts for your readers, Joshua?

MR: (I'm fighting back tears here … I'll need a moment to compose myself).

TT: Maybe we'll have to bring you back for a few guest appearances on Fast Talk. That is, if everything goes well on your Tucson-to-Las Vegas journey that might be a bit ill-advised, considering the company you're keeping with the DirtonDirt.com pay-per-view crew.

JJ: First of all, I'm glad my time at DirtonDirt.com is ending with my first trip to Tucson. It really is one of those events that every Dirt Late Model fan should get to at least once. ... It's a bittersweet moment I'm going through right now. While I'm glad to enter a new chapter in my life that will allow me to spend more time at home with my wife and our growing family, I'm certainly going to miss going to the races and getting to interact with drivers and fans. And of course I'm going to miss everyone with DirtonDirt.com. From the long nights on the road traveling from race to race on the Summernationals to the spontaneous side trips on an off day of an extended trip... it truly has been a great experience.

TT: Yes, your long nights in the coming months will be more diaper-related than story-related. You brought some great stories over your three years with us. Thanks for all the hard work.

MR: We'll certainly miss Joshua. He’s been a great asset and will be difficult to replace. Todd, will I get a swan song like this one day too?

TT Yes, you will Michael. I've penciled it in for the third Monday in April 2045.

JJ: My head is spinning just thinking of you two still doing Fast Talks more than 30 years from now.

MR: That makes three of us. We'll miss ya buddy!