NDRL rookies looking for a leg up in desert action 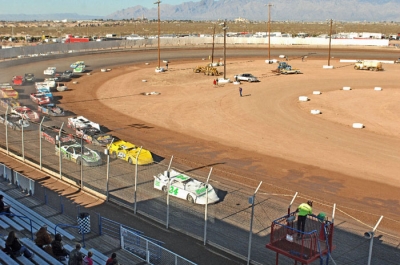 In Major League Baseball, up-and-coming youngsters get a chance to hone their skills and earn roster spots before each season in spring training. Likewise, first-year professional football players use the NFL’s preseason games as a chance to get valuable playing time and impress coaches.

The first full season of the National Dirt Racing League will feature a similar preseason training period that will be used by a number of up-and-coming drivers to prepare themselves for a run at the national tour’s Rookie of the Year Award and prove they belong among the series regulars.

Seven drivers have already applied for rookie status with the John Kennedy-founded tour and have been approved. Six of those drivers plan on kick starting their NDRL rookie campaigns with a trip west for the tour’s nine non-points races during Tucson (Ariz.) International Raceway’s six-race Winter Extreme miniseries Jan. 11-19 and El Paso (Texas) Speedway Park’s three-race Battle at the Border Jan. 24-26.

While the nine preseason races don’t offer NDRL points, there’s still plenty to motivate the Rookie of the Year hopefuls to make the trip.

For Robinson, Jackson and Moyer, the trip presents an opportunity to make their first competitive laps in a new chassis without the pressure of having to post consistent finishes. Moyer, who as a past winner in Tucson’s January action is the only NDRL rookie with previous experience at the 3/8-mile oval, will make his debut in a Longhorn Chassis. Jackson and Robinson will both debut new Club 29 Race Cars, the chassis brand designed by two-time World of Outlaws Late Model Series champion Darrell Lanigan and veteran crew chief and setup guru Ronnie Stuckey.

“Having a new car, you definitely need some test time,” said Jackson, who last season became the first driver to capture MARS DIRTcar Series and Lucas Oil Midwest LateModel Racing Association championships in same season. “We don’t really have nothing to lose since we don’t have to worry about the points and all, so maybe we can try different stuff and learn some things that’ll help us down the road.”

A long-time Rocket Chassis driver, Blair doesn’t have to worry about learning a new chassis, but he’ll still take all the extra seat time he can get before the rookie points chase officially starts. Blair, the second-generation racer who has dominated the Crate Late Model ranks in recent seasons, enters his first full season of Super Late Model competition after landing a ride with Kennedy Motorsports as a teammate to veteran driver Tim Fuller.

With only one Super Late Model start in the past two seasons, Blair aims to get as much track time as possible to help shorten his learning curve in open-engine competition.

“Pretty much all of them guys have more Super experience than I do,” Blair said of his fellow rookie competitors. “It’s nice to have these nine nights of racing and the two practice nights to just learn and catch us up a little bit.

“It’s plenty of time to try some things and if you have a bad night, it’s not going to ruin your season. It’s nice, because we won’t get very many nights to do that after that points start.”

Thomas has proven he’s one of the top drivers in his home state over of Alabama the past few seasons with numerous victories between Super, Crate and Limited Late Model competition. But with his experience limited mostly to the Southeast, the reigning Chevrolet Performance Super Late Model Series champion will face a tough task in his first season of national touring. He hopes the trip west will help him prepare for the challenge.

“We have a big variety (of tracks) down here in the South, but when you travel to other places, it’s just totally different,” said Thomas, who began his season with a Jan. 5 victory in Talladega (Ala.) Short Track’s Ice Bowl. “Every lap you make, you feel like you learn something and get a little bit better. So every race we can get in before those points kick off it’s going to be huge for us.”

After touring with the World of Outlaws Late Models in 2012, Robinson enters his NDRL rookie campaign as one of the more seasoned of the rookie contenders. But even with some prior touring experience under his belt, Robinson welcomes the chance to make pressure-free laps in Arizona and Texas. He learned first-hand how easy it is to dig an early hole in a points chase from his rookie season on the Outlaws tour, which begins each year with a spate of points race during February’s Georgia-Florida Speedweeks.

“In 2012 when I ran (the Outlaws), we showed up for Speedweeks and were still green and had to fire right off on the series. We had some problems and it put us behind right off the bat,” said Robinson, who finished second to Bub McCool in the 2012 WoO rookie chase. “Any time you can get out and race before the series with stout competition like there’s gonna be out there, it’s going to help you get a jump on the season.”

While each of the rookie drivers heading to Tucson and El Paso will undoubtedly be focused on their own performances, the preseason races also give them a chance to get an early look at the other rookies they’ll compete against all season.

“I think a driver would be lying if he told you he wasn’t gonna size up the competition while we’re out there,” Robinson said. “It’s only two racetracks and it’s a different type of racing with the tire rule and all, but I think you can definitely get a gauge of the guys you’re gonna be competing with once the points get started.”

Besides getting an early glimpse at their rookie challengers, each of the drivers also aim to use the preseason action to build confidence and momentum for the remainder of the season. While veteran drivers might downplay the importance of such intangibles, an extra boost from a strong performance can make a major difference for the psyche of a rookie looking to prove he can compete on a national tour.

“Racing is always a confidence thing,” Blair said. “My dad’s always told me that racing’s 99 percent in your head. You have to be confident and if you believe you can get the job done, you’ll be able to. But if you go into a race thinking you don’t belong there, you’re not gonna do any good.

“That’s why I’m hoping we can go out there and have some good runs. If I can make all the shows and run good, it’ll definitely boost our confidence going into the season.”

Of course nothing would prove a driver’s place among the NDRL regulars and establish his status as one of the tour’s top rookies more than a victory in one of the nine races between Tucson and El Paso.

“It’s a good place to try some stuff, but it’s such a long way out there, I don’t think any of us would be going if you didn’t think you had a chance to win,” Jackson said. “All these guys are talented and I think any of us could win one of those races. I just hope we’re the one to get it done.”