Breakouts, newcomers, most improved in 2013 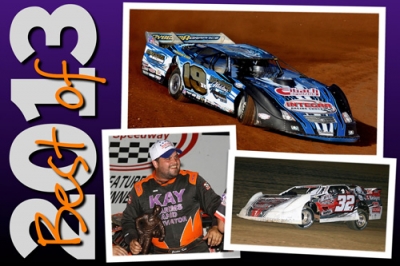 As part of its ongoing Best of 2013 coverage, DirtonDirt.com hands out awards to worthy Dirt Late Model drivers. We rank the top breakout drivers, top newcomers and most improved drivers and comeback drivers for the past season. This season's honorees:

Bobby Pierce (32), Oakwood, Ill.: His $50,000 Champion Spark Plug sponsorship was just the start of good things in 2013 for the 16-year-old son of Hall of Fame driver and chassis builder Bob Pierce. He notched 11 victories overall, including three paying $10,000 on the UMP DIRTcar Summernationals while finishing second in series points while becoming the tour’s youngest winner. National-level highlights included a fourth-place finish in his first World 100 start and a third-place finish in the World of Outlaws finale in Charlotte. | Best of 2013 coverage

Justin Kay (15k), Wheatland, Iowa: With just three victories in his first six seasons of Late Model racing, Kay exploded in 2013 with a stunning 20 victories, including a stretch of 16 victories over 26 mid-summer races. He captured IMCA’s weekly title and finished second on the Deery Brothers Summer Series. His successful season in his spec-engine IMCA car also included his first open-competition engine victory on the Corn Belt Clash, and he finished fifth or better in all but 17 of his 62 starts.

Mark Pettyjohn (8), Millsboro, Del: His career-richest victory late in 2012 was a harbinger of things to come for the 30-year-old driver from Delaware’s popular dirt racing family. Pettyjohn raced to a championship on the Three State Flyers circuit, notching three tour victories. He capped the stellar seasons by eclipsing his biggest victory with a $10,000 triumph in the Sunoco Fall Classic at Natural Bridge (Va.) Speedway.

Ryan Gustin (19), Marshalltown, Iowa: Gustin’s Rally Heard 'Round the World (or at least Nebraska) at I-80 Speedway ended with a thud, but it didn’t take away from a rookie season that saw the modified standout notch four Late Model victories on three tours. He won in Springfield, Mo., Wichita, Kan., Siloam Springs, Okla., and Greenwood, Neb.'s I-80, where he later threatened to steal away with the $27,000 Silver Dollar Nationals winner’s purse after starting on the tail of a rich Lucas Oil Series event. Alas, a collision with a lapped car knocked him out of the lead, but not before he’d turned heads throughout the Dirt Late Model world.

Shane Hebert (9), Lafayette, La.: After flashing success in part-time starts in 2012, Hebert’s Late Model success early in 2013 spurred the modified-focused Allgayer Racing Team to run more full-fender events than ever. Hebert started winning and never stopped, scoring five victories on the P&W Sales Southern United Professional Racing, including a stretch of three victories over a four-race mid-summer stretch. He capped his season with an unsanctioned Spooky 50 victory worth $4,000 at Chatham (La.) Raceway, where he also swept the night’s modified and limited modified feature events.

Donny Schatz (15), Fargo, N.D.: The five-time World of Outlaws STP Sprint Car champ dabbled in Late Models with success you might expect from an expert short-tracker. He clicked off back-to-back Memorial Day weekend victories at Williston Basin Speedway and Nodak Speedway. Denied an NLRA victory after tangling with a lapped car at Norman County Raceway in Ada, Minn., his first NLRA triumph came a month later at his home-state River Cities Speedway on a night when he also won the WoO sprint main event.

Jason Jaggers (32j), Wyanet, Ill.: Stepping out of the shadows in a state brimming with standout dirt racers, the 36-year-old farmer grabbed five victories. His first special event victory came with a $3,000 payday in Sunoco American Late Model Series action at home-state Peoria Speedway, then he topped that with a last-lap pass for a career-high $5,000 payday at Moler Raceway Park near Cincinnati, Ohio. His program was boosted by the addition of veteran crew chief Chris Burton.

Dustin Linville (D8), Bryantsville, Ky.: The driver nicknamed Rooster has had a seasons with more victories during a solid six-year career, but the 22-year-old was never better than 2013 when he grabbed five victories at four tracks, including his first victory at Brownstown (Ind.) Speedway in the Paul Crockett Memorial and a career-high $5,000 payday at home-state Ponderosa Speedway’s Fall Classic. Perhaps his biggest moment, though, came at Brownstown’s Jackson 100 when he posted a runner-up finish to Don O’Neal for his best-ever Lucas Oil Series performance.

Joel Callahan (40), Dubuque, Iowa: The 49-year-old Callahan, whose racing career started at age 40, had a career-best season while collecting track titles at Farley and Dubuque Speedways. He grabbed four weekly victories, then capped his season at Farley’s Yankee Dirt Track Classic with a career-high $7,500 for his first Deery Brothers Summer Series victory. “Every year we’ve just been getting better,” Callahan said, “so hopefully next year will be even better than this year.”

Chase Washington (38), Houlka, Miss.: Sidelined the first half of the season for surgery and treatment of non-Hodgkins lymphoma, the weekly Crate Late Model champion returned with dramatic success, including his first NeSmith Chevrolet touring series victory at Magnolia Motor Speedway in Columbus, Miss. “After all I’ve been through this year,” Washington said, “I just can’t find the words to describe how much this win means to me.”

Jason Feger (25), Bloomington, Ill.: Another driver whose “comeback” came within the 2013 season, Feger was demoralized with losing a $20,000 Illini victory after a World of Outlaws disqualification he believed was unjust. He dealt with the six-month suspension from virtually every race in his home state by hitting the road with success. He grabbed his first career victories on three tours — Corn Belt Clash, NDRL and Lucas Oil — while adding a MARS victory. Two of his victories paid $10,000-to-win.

Brian Harris (15), Davenport, Iowa: Doubling his career-victory total on the Deery Brothers Summer Series in a single season, Harris drove Lynn Richard’s car to his first series title. He piled up five series victories including a series record-tying four in a row.

Alex Ferree (10), Saxonburg, Pa.: With his 12 total victories more than the previous five seasons combined, Ferree ruled Pittsburgh-area weekly racing with championships at Pittsburgh's Pennsylvania Motor Speedway and Lernerville Speedway in Sarver. Three of his victories were special events sanctioned by NDRL's ULMS Racing Series as he topped his best-ever victory total since his breakout 2007 season. He finished third or better 34 times.