Best of 2013: Top-five lists from a busy season 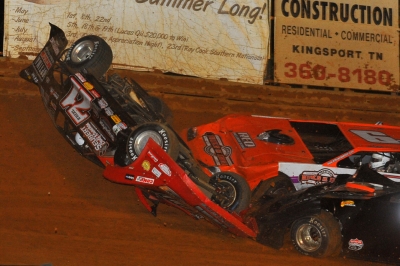 With top driver honors previously published, DirtonDirt.com takes a look at some other top-five lists from the 2013 season, running the gamut from the top-five performances to top-five gaffes of the year:

Bloomquist’s plans: After running full time on the Lucas Oil Series for five seasons, Hall of Famer Scott Bloomquist of Mooresburg, Tenn., drops off the tour in June, running an independent schedule — including several Lucas Oil events — the remainder of the season. He also announces a collaboration between Bloomquist Race Cars and steering expert Randy Sweet of Sweet Mfg.

World-worthy rally: John Blankenship of Williamson, W.Va., races from the sixth row and into the lead just past the halfway point at Eldora Speedway in racing to his first World 100 victory.

Worst to first: Starting near the tail of the Silver Dollar Nationals field at I-80 Speedway, Ryan Gustin of Marshalltown, Iowa, rallies from his 34th starting spot and into the lead — before it all went for naught in a tangle with a slower car.

WoO shocker: In one of the biggest national touring upsets in history, Dale Hollidge of Mechanicsville, Md., grabs a $10,000 WoO victory at Winchester (Va.) Speedway in his first-ever feature start.

Feger suspension: After apparently earning a career-high $20,000 for his victory in Farmer City Raceway’s Illini 100, Jason Feger of Bloomington, Ill., driver is stripped of the WoO victory when lab tests reveal a chemically-altered tire. Claiming innocence, Feger’s appeal is denied by a three-member World Racing Group appeals board. His six-month WRG suspension prevents the former UMP DIRTcar Summernationals champion from any WoO or UMP DIRTcar event through early August.

Owens disqualification: The first-year NDRL strips Jimmy Owens of Newport, Tenn., of an April 13 victory at Federated Auto Parts Raceway at I-55, saying lab tests shows one of his tires was chemically-altered. Owens disputed the tests saying his team’s tires were “100 percent legal,” but the series denied his request for an appeal for lack of merit.

North-South caution: Leader Don O’Neal of Martinsville, Ind., was cruising on lap 56 of the Sunoco North-South 100 at Florence Speedway in Union, Ky., when he tangled with Earl Pearson Jr.’s slower car and spun. Reviewing the video replay, officials ruled he never stopped and restored him to the top spot. O'Neal led the rest of the way.

Prairie Dirt Classic: Shannon Babb’s $20,000 victory at Fairbury (Ill.) American Legion Speedway was nearly overshadowed by the last-lap contact between second- and third-place finishers Dale McDowell and Bobby Piece, as well as Pierce’s contention that the track’s infield tires repositioned during the race hampered his inside groove.

WISSOTA 100 rainout: When rain hits Dakota State Fair Speedway in Huron, S.D., before the Late Model feature, officials decide to cancel the race and split the payout among drivers in the main event lineup.

Richards-Lanigan: The World of Outlaws contenders strain the word “friendly” in friendly rivals with clashes at Florida’s Volusia Speedway Park (when Lanigan moved his hauler from alongside Richards to the lower pits) and again at Iowa’s Knoxville Raceway (when Lanigan drove the wrong way down the track to confront Richards after contact).

NDRL-World Racing Group: After Jimmy Owens is disqualified from a National Dirt Racing League event for violating series tire rules, NDRL founder John Kennedy calls on the World Racing Group to uphold the suspension because the race was co-sanctioned by UMP DIRTcar. WRG’s Tom Deery says if Kennedy wants Owens suspended, he should’ve done it himself.

Madden-Ogle: Billy Ogle Jr.’s last-corner slide job in Schaeffer Oil Southern Nationals action at Duck River Raceway Park in Wheel, Tenn., sends leader Chris Madden into the fence — and allows Eric Jacobsen to slip past both of them for an unlikely victory.

Birkhofer-Landers: Angry with contact that sent his car into I-80 Speedway’s frontstretch fence, Brian Birkhofer runs onto the racing surface under caution to show his displeasure with Jared Landers during the Silver Dollar Nationals, then takes a verbal shot at Landers in his post-incident interview.

McCool-Bloomquist: Taking exception to contact with Scott Bloomquist in the Lucas Oil event at Magnolia Motor Speedway, Bub McCool confronts the Hall of Famer on the frontstretch after the race.

Silver Dollar slipup: Ryan Gustin rallies from 34th into the lead at I-80 Speedway’s Silver Dollar Nationals, but while pulling away from eventual winner Jimmy Owens, he gets into turn-three too hard and collides with the slower car of Kyle Berck, causing race-ending damage.

Uh, he’s not the winner: While Jimmy Mars is being interviewed in victory lane at Cedar Lake Speedway’s Legendary 100, officials at the New Richmond, Wis., track review the photo finish and declare Scott Gilberts of Sand Creek, Wis., the winner.

Up and over (twice): In the late stages of Iowa’s Lucas Oil Late Model Knoxville Nationals, Don O’Neal makes contact with two drivers (Eddie Carrier Jr. and Jason Feger) on consecutive laps that causes race-ending, rollover crashes for both drivers.

Marlar’s miscue: In control of a World of Outlaws event at Bubba Raceway Park, Mike Marlar of Winfield, Tenn., gets too high entering turn three with just over a lap remaining to allow Darrell Lanigan to slip by for a victory in Ocala, Fla.

Darrell Lanigan: After long-time success with Rocket Chassis, the Union, Ky., driver and chassis expert Ronnie Stuckey combine to develop a yet unnamed chassis that will debut in January at Tucson’s Winter Extreme.

MasterSbilt house car: Don O’Neal leaves the Crothersville, Ind.-based team for a ride in the Barry Wright house car with North Carolina’s Clint Bowyer Racing, opening up the seat for Ray Cook of Brasstown, N.C., to rejoin the national touring scene with MasterSbilt.

Brian Birkhofer: After several seasons in the MB Customs car he co-developed with Mars Race Cars, the Muscatine, Iowa, driver makes the switch to Rocket for 2014.

Scott Sexton: The successful and well-liked Pigeon Forge, Tenn., dirt racer sidelined in recent seasons by a serious blood disorder dies in January at age 46. Sexton was a terror on the high-banked tracks of Volunteer Speedway, Atomic Speedway and Tazewell Speedway through the 1990s and early part of the century, piling up dozens of lucrative victories in his No. 52 car primarily owned by his father Howard. Sexton won 10 career Southern All Star Dirt Racing Series events, including $10,000-to-win triumphs at Atomic and Volunteer in 2002.

Don Grossniklaus: The former dirt racer as well as track and series owner dies in a head-on traffic accident in October near his Wooster, Ohio, home. He was 78. Nicknamed Sonny and often shortening his last name to Gross, he frequently piloted a Mopar-powered No. 75 during his Late Model career, winning a STARS race at Raceway 7 in Conneaut, Ohio, in 1985 and finishing fourth in series points in ’87. Gross also in the mid-'80s operated Ohio’s Buckeye Speedway, and later owned the STARS circuit after tour founder Carl Short. His off-and-on driving career continued into his early 70s.

Don Roseen: An influential dirt racing fixture in the upper Midwest as a racer, track prep specialist and WISSOTA Promoters Organization supporter, died in May at age 72. The Proctor, Minn., resident was working the track surface at Amsoil Speedway in Superior, Wis., when he was found unresponsive. Roseen had a 31-year driving career and was active for nearly 20 years in WISSOTA’s management and promotion, serving as a board member, tech adviser, vice president and president. He was president from 1991-’95 and again in 2004. His wife Joyce served as WISSOTA’s recording secretary from 1993-2002.

Paul Crockett: The three-time Brownstown (Ind.) Speedway champion and local barber shop owner who competed at the track more than 45 years died in May at age 79. Crockett won Late Model titles at the quarter-mile Jackson County oval in 1975-76 and ’80, and was the winner of the track’s second annual Jackson 100 in 1981. While Crockett's most successful seasons came in the 1980s, he continued racing long after, competing as recently as 2006, well into his 70s. He was an inaugural member of the Brownstown Speedway Hall of Fame and a two-time World 100 starter.

Carl Billet: The 18-time champion at five Pennsylvania tracks died in February after suffering a stroke. The 2012 Susquehanna Speedway Park Limited Late Model champion was 58. He won 182 Super and Limited Late Model races and seven championships at SSP in Newberrytown, Pa., where he’s the all-time winningest driver with 58 victories. He also won six championships at Silver Spring Speedway in Mechanicsburg, two at Bedford Speedway, two at Clinton County Raceway in Mackeyville and one at Williams Grove Speedway in Mechanicsburg. Billet had at least one victory for 26 consecutive seasons.