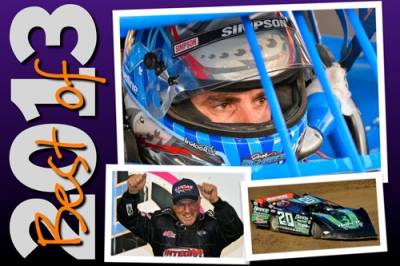 With the 2013 racing season in the books, DirtonDirt.com takes a closer look at top five drivers among national, regional and weekly Dirt Late Model competition. Here's the Best of 2013:

Josh Richards (1), Shinnston, W.Va.: It didn’t take Richards very long to return to the top of Dirt Late Model racing. After stepping away from full-time dirt track competition to take a shot at NASCAR in 2012, the 25-year-old Shinnston, W.Va., driver successfully returned to his roots this season in claiming his third World of Outlaws Late Model Series championship and his first DirtonDirt.com Driver of the Year Award. | Best of 2013 coverage index

Establishing his authority early in his comeback season, Richards scored two victories during the Outlaws’ eight-race Georgia-Speedweeks stretch including a $20,000 payday in the year’s richest Speedweeks event at Bubba Raceway Park in Ocala, Fla. He went on to claim eight more victories on the Outlaws tour including an unprecedented $42,000 sweep of Lernerville (Pa.) Speedway’s three-race Firecracker 100 weekend.

Richards put an exclamation point on his championship season with a victory during the tour’s season finale at The Dirt Track at Charlotte in Concord, N.C, pushing his total WoO earnings to $342,970 in becoming the first three-time series champion in the national tour’s modern era.

Away from the Outlaws tour, Richards added six more victories to push his overall win total to 16 victories in 66 starts. His highlights included a $20,000 victory in the inaugural National Dirt Racing League event at Paducah (Ky.) International Raceway and a preliminary night victory during the Dream weekend at Eldora Speedway in Rossburg, Ohio. He also claimed both preliminary features at Knoxville (Iowa) Raceway’s Knoxville Late Model Nationals before finishing second in the $40,000-to-win finale.

Richards was a fixture at the top of the DirtonDirt.com Top 25 poll all season. After being voted 10th in the preseason rankings, Richards was No. 1 when the poll debuted after Speedweeks and went on to top the pole in 28 of 38 weeks while never dropping below No. 3. He was also the only driver to be voted a unanimous No. 1, doing so in back-to-back weeks in early July.

Darrell Lanigan (29), Union, Ky.: Lanigan was once again among the sport’s top performers in 2013, and for the second straight season, the 43-year-old veteran racer ranks second in the DirtonDirt.com Driver of the Year rankings.

Lanigan posted another stellar season with 15 overall victories in 60 starts highlighted by a $40,000 victory in the Knoxville Late Model Nationals finale. Lanigan led the World of Outlaws tour with 12 victories, but he came up short of claiming his third series title in finishing second to Richards.

Getting off to a strong start, Lanigan claimed three World of Outlaws victories and one UMP win in 11 Speedweeks starts. A slow spring produced just one victory with Lanigan claiming a $15,000 Jackpot 100 triumph at Tyler County Speedway in Middlebourne, W.Va., on Memorial Day weekend.

Lanigan got rolling in early summer with back-to-back Outlaws victories in Ontario. He added four more summer Outlaws victories before claiming a preliminary feature victory during Eldora’s World 100 and finishing second in the World 100 main event. He also repeated his Down & Dirty 75 victory from 2012, earning another $15,000 payday at dirt-covered Berlin Raceway in Marne, Mich.

A pair of major late-season victories added even more luster to an already impressive season with Lanigan claiming his first Knoxville Nationals trophy in September before claiming the opening night of Charlotte’s WoO World Finals.

Lanigan spent eight weeks at the top of the DirtonDirt.com Top 25 and was the only driver besides Richards to rank among the top five for the entire season in never ranking lower than fourth.

Jimmy Owens (20), Newport, Tenn.: The 41-year-old Owens was once again the creme of the crop on the Lucas Oil Late Model Dirt Series, scoring a tour-best eight victories on his way to his third consecutive series championship.

After a single victory in eight Speedweeks starts, Owens picked up steam with a pair of Lucas Oil triumphs in April before setting the stage for an impressive summer by dominating the Show-Me 100 weekend at Lucas Oil Speedway in Wheatland, Mo. Owens swept the weekend at Lucas Oil’s crown-jewel event, winning the $5,000 Lucas Oil MLRA tune-up race and earning $30,000 for his third consecutive Show-Me 100 victory.

Owens added four more Lucas Oil victories over the summer, including a $27,000 Silver Dollar Nationals victory I-80 Speedway in Greenwood, Neb., and a $25,000 payday in the Hillbilly 100 at I-77 Raceway Park in Ripley, W.Va. Owens’ lone non-Lucas victory came late in the season at Magnolia Motor Speedway in Columbus, Miss., where he earned $20,000 for winning the unsanctioned Cotton Pickin’ 100 for the second straight year.

After topping the DirtonDirt.com Top 25 preseason poll, Owens ranked just outside the top five in the first three polls following Speedweeks before breaking into the top five in mid-March, where he stayed the rest of the season. Owens was the only driver besides Richards and Lanigan to rank No. 1, making one-week appearances at the top of the poll in late April and early September.

John Blankenship (23), Williamson, W.Va.: After flashes of success in recent seasons, John Blankenship transformed into a consistent contender in 2013 with a career-best season. With three series victories, the 32-year-old Blankenship was among the championships contenders on the Lucas Oil tour and claimed his first crown jewel victory in dominating the second half of Eldora’s World 100.

Following limited Speedweeks action, Blankenship scored his first victory of the year in mid March with a $10,000 triumph in Spring Nationals action at Volunteer Speedway in Bulls Gap, Tenn. He claimed the first of his three Lucas Oil Series victories with a then career-high $20,000 victory at Batesville (Ark.) Motor Speedway’s Bad Boy 98 in May and scored two more series victories at Tazewell (Tenn.) Speedway and Lucas Oil Speedway before notching his fifth and final victory of the season at the World 100 in September.

Starting the year ranked 21st in DirtonDirt.com’s Top 25 poll, Blankenship was ranked in all but one edition of the poll and never ranked lower than ninth after cracking the top 10 in early June. He climbed as high as No. 3 following his World 100 victory and remained in the top five for the final 10 weeks of the season.

Brandon Sheppard (B5), New Berlin, Ill.: Brandon Sheppard proved he’s one of the sport’s most promising young stars with a 2013 season that even veteran drivers would envy. The 20-year-old second-generation racer scored 15 victories overall with the biggest coming in October’s 33rd annual Dirt Track World Championship at Portsmouth (Ohio) Raceway Park. Subbing for Richards in the Rocket house car, Sheppard’s $50,000 DTWC victory made him the youngest ever crown jewel race winner and was his first on the Lucas Oil Series.

Besides his DTWC triumph, Sheppard’s national success included two World of Outlaws victories, the first coming on the opening night of the USA Nationals at Cedar Lake Speedway in New Richmond, Wis., and the second at the Photobilly 50 at Belle-Clair Speedway in Belleville, Ill., an event Sheppard also won in 2012.

Sheppard also found plenty of success at regional level this year, claiming four victories on the six-week UMP DIRTcar Summernationals on his way earning $25,000 for his first series championship. In all, Sheppard claimed 14 UMP DIRTcar-sanctioned victories on the year to also claim the $20,000 national points title.

Dennis Franklin (2), Gaffney, S.C.: In perhaps one of the most dominant displays on any regional tour, Franklin won nine of 17 events on the Carolina Clash Super Late Model Series to easily claim his third series title in four years. The championship season was a banner year for the AES Racing driver, whose 10 overall Super Late Model victories was more than he won in each of the past three seasons combined. Franklin also scored three Crate Late Model victories, including a $17,000 triumph in October’s Fastrak World Championship at Beckley (W.Va.) Motorsports Park.

Jackie Boggs (B4), Grayson, Ky.: In one of the best seasons of his career, the veteran Boggs amassed an impressive 14 victories at seven tracks highlighted by a $10,000 payday during the Epic Weekend event at Brushcreek Motorsports Complex in Peebles, Ohio. Boggs also scored six $5,000 victories between five tracks and further impressed at with a third-place finish in Dirt Track World Championship at Portsmouth.

Doug Drown (63), Wooster, Ohio: The 31-year-old Drown continued to impress with 15 victories in 39 starts. His success began early in the year with a runner-up finish during the Lucas Oil tour’s Speedweeks action at East Bay Raceway Park in Gibsonton, Fla. Other highlights include a season-high $12,000 payday at the unsanctioned Southern 100 at Southern Ohio Speedway in Wheelersburg, Ohio, a $5,000 payday at Attica (Ohio) Raceway Park for his first Summernationals victory and a $4,000 Icon Tour victory at Wayne County Speedway in Orrville, Ohio.

Casey Roberts (101), Toccoa, Ga.: The 36-year-old Roberts added yet another regional title to his resume in claiming his second straight Ultimate Super Late Model Series title. He racked up seven Ultimate Series victories, including a $10,000 triumph in the tour’s season finale at County Line Raceway in Elm City, N.C., and added a Spring Nationals victory and unsanctioned win at Tri-County Racetrack in Brasstown, N.C., for nine victories overall.

Justin Kay (15k), Wheatland, Iowa: After scoring just three victories in his previous six seasons, the 24-year-old Kay exploded in 2013 with a stunning 20 victories on his way to capturing his first IMCA weekly title and finishing second on IMCA’s Deery Brothers Summer Series. His successful season in his spec-engine IMCA car also included his first open-competition engine victory on the Corn Belt Clash.