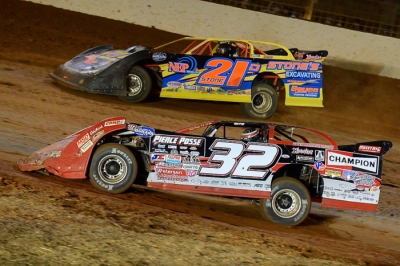 Bobby Pierce (32) heads for a third-place finish at Charlotte. (dt52photos.com)

CONCORD, N.C. (Nov. 9) — Bobby Pierce is proving that big stages aren’t too big for him. Just a few months after scoring an impressive fourth-place finish in Eldora Speedway’s World 100, Pierce, 16, of Oakwood, Ill., shined at another major Dirt Late Model event with a 17th-to-third performance Saturday’s World of Outlaws World Finals feature at The Dirt Track at Charlotte.

For Pierce, the 16-year-old son of retired Hall-of-Fame racer Bob Pierce, a stirring charge through one of the strongest fields of drivers he faced all season, was just like any other race. | Richards wins WoO finale

“I don’t really worry too much or even think about what race it is or where we’re at,” said Pierce, who made his Charlotte debut at this weekend’s season-ending doubleheader for the World of Outlaws Late Model Series. “Every race is really a big race to me pretty much. There’s a ton of fans here, just like at Eldora. That’s really cool, but I just try to see it as any other race when I’m out there.”

Along with his strong finishes, Pierce’s Charlotte weekend shared other similarities with his Eldora performance. Much like he did during his Eldora debut at June’s Dream weekend, Pierce struggled at first to adapt to Charlotte’s 4/10-mile at the World Finals.

Mid-pack qualifying efforts on Thursday put Pierce starting deep in his heat races on both Friday and Saturday, and he disappointed in failing to make Friday’s main event. But just like he turned things around in his second race at Eldora, Pierce and his crew quickly adapted to Charlotte and were much improved on Saturday night. He advanced from fifth to third in his heat race before making his impressive charge to the front in the main event.

“It always takes just a couple laps to learn a new track,” Pierce said. “There’s a couple things out there that I still need to figure out, but I think after making laps yesterday and the day before, I just finally got a hold of it. Just like Eldora, after a couple nights there, I finally got it figured out.

“We all had to figure the track out and finally got a good setup for it. I was just glad to turn around a 17th-place starting spot and make a third-place finish out of it.”

Charlotte and Eldora aren’t the only tracks where Pierce has been forced to adapt quickly. Traveling extensively for the first time this year, Pierce has had plenty of chances to learn new tracks during his busy race season.

Pierce hopes all that experience will lead to even better performances next season. With his 2013 season complete, Pierce is happy with what has turned out to be a breakout year for him. But he’s looking for even better in 2014.

“It seems like I’ve been progressing a little more and more this year,” Pierce said. “Hopefully I keep progressing and we’ll see how it goes. I’m happy with this year and hopefully it’s even better next year. I think it will.”