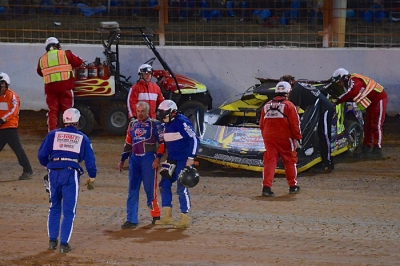 Billy Moyer is helped to an ambulance after a wreck at Charlotte. (dt52photos.com)

CONCORD, N.C. (Nov. 8) — What began as a promising World of Outlaws World Finals debut for Billy Moyer on Thursday quickly took a turn for the worse on Friday.

Returning to The Dirt Track at Charlotte for the first time since 2010, Moyer, the Hall of Famer from Batesville, Ark., ruled Thursday’s World Finals action in topping both rounds of World of Outlaws Late Model Series time trials. On Friday, he was sent to a Charlotte-area hospital after contact with Jimmy Owens caused the driver’s side of Moyer’s race car to slam into the back straightaway wall after on the second lap of the night’s first heat race. | Lanigan wins Charlotte opener

The 56-year-old Moyer was alert and climbed from his car following the accident, but he appeared dazed as he walked gingerly to the ambulance with the help of two track safety officials. He rode back to the pit area in the ambulance before crew members later drove him to the hospital after Moyer continued to feel dazed and complained of pain in his left elbow and wrist.

Moyer later returned to the track after being treated and released with a headache but no broken bones. If he’s able to race on Saturday, World of Outlaws rules will allow Moyer to maintain his pole heat race starting spot even if he goes to a backup car due to the event’s unique format. Moyer wasn’t available for comment Friday night and his status for Saturday’s event remained uncertain.

Owens spoke with Moyer immediately following the heat race and noticed that Moyer was quite shaken up from the hard hit.

“I went over there and talked to him and asked if he was OK,” Owens said. “I don’t know, he just didn’t seem .... he wasn’t the same Billy right then. I know because he wasn’t mad at me.”

While he expected Moyer might blame him for the accident, Owens, who only drove under Moyer after Moyer’s car slid high in the middle of the corner, described the contact as an unintentional racing deal.

“I would never do nothing intentional like that to anyone. It’s racing, but I damn sure don’t want anyone to get hurt,” Owens said. “He scooted up and I filled the hole and we got together. It must’ve knocked the steering wheel out of his hand and sent him into the wall.

“It was scary. I was setting there on the front straightaway and saw the ambulance headed over there, and I just got sick to my stomach. I don’t want to be the cause of anyone getting hurt, period. It was just a bad deal.”

While it appears Moyer escaped the accident without serious injury, the scare continues a troubling trend of injuries among high-profile drivers this season. He joins a long list of drivers to make hospital visits following wrecks this season that includes Don O’Neal, Josh McGuire Austin Hubbard, among others.

Veteran driver Earl Pearson Jr. of Jacksonville, Fla., is familiar with racing injuries after being knocked unconscious and sent to the hospital following a violent rollover wreck during a Speedweeks event at Volusia Speedway in 2008. At the time, Pearson didn’t use a full containment seat in his race car or any kind of head and neck restraint device. Since then, he’s always used containment seats that prevent side-to-side movement in the car and wore a HANS head restraint device that keeps drivers’ heads from snapping too far forward during a wreck. Moyer uses neither a containment seat nor HANS device.

“When I had the wreck in Volusia, I had a (non-containment) seat just like Billy’s,” Pearson said. “After that, I went to a HANS device and a full containment seat. I haven’t had a wreck — knock on wood — like that since, but for me, I feel like it’s a safer deal.

“I didn’t see (Moyer’s) wreck and I don’t know what took place, so I can’t say it’s a seat issue or an equipment issue or whatever. But personally, with a HANS and a full containment seat, I think it’s worth it. It’s just better to be safe than sorry.”

Moyer’s wreck also caught the attention of fellow Hall of Famer Scott Bloomquist of Mooresburg, Tenn. Bloomquist, who builds his self-designed Team Zero by Bloomquist race cars in his Mooresburg, Tenn., said he’s been researching ways to make his race cars safer. After seeing Moyer’s wreck, he’s seriously strongly considering taking the small step of adding a window net to the driver’s side of his own race car.

“There’s times a guy’s head can fly out the door and hit the wall,” Bloomquist said. “That’s the first thing I thought of when I saw him hit because he did a full turn and hit directly on the driver’s door. We’re probably going to put a left-side window net in pretty just to be safe if that ever happens.

“Most accidents that cause permanent damage or end drivers’ careers are usually driver-side hits. When I saw how hard he hit on the drivers’ side, I was concerned. But hopefully he’s OK and he’ll be good to go tomorrow.”