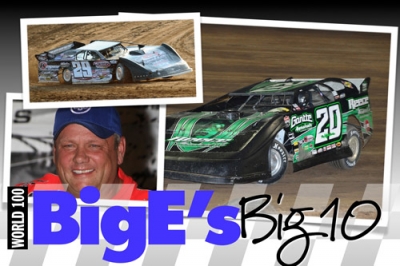 The 2012 season has been mostly dominated by the Big Five drivers — Hall of Famers Billy Moyer (with a touring-best 15 victories) and Scott Bloomquist along with Darrell Lanigan and his record-setting World of Outlaws Late Model Series season and a pair of Lucas Oil Late Model Dirt Series regulars of Jimmy Owens (points leaders) and Don O’Neal (series-best 11 victories). | Complete World 100 coverage

It’s no surprise they come to Eldora Speedway’s 45th annual among the favorites, but there will be plenty of competition for them at a race expected to draw more than 120 cars. Here’s a look at driver odds going into Rossburg, Ohio, for the $45,000-to-win event, Dirt Late Model’s most prestigious race.

The two-time winner, who barely held on to win last year in a faltering car hampered by aerodynamic woes, will try to become the first driver in race history to post six straight top-five finishes in the event. He’s got the longest streak of consecutive starts (eight) and his stretch of five straight top-fives matches Scott Bloomquist (’93-’97) and Jeff Purvis (’93-’96).

Why he’ll win: There’s no one closer to World dominance this moment than Owens.

Why he won’t: It’s been a season light on victories (five overall), and his elimination during Dream prelims isn’t a good omen.

Enjoying a career season, Lanigan is dominating the WoO circuit and might’ve had a shot at 20 victories without recent rainouts. Still, 14 is an impressive number and he’s won in every condition on every size track, sometimes by a mile and a few times by inches. The challenge now? Translate that into a victory in the sport’s biggest event, one he’s started 18 times without reaching the winner’s stage.

Why he’ll win: Could it be any clearer that this is Lanigan’s year?

Why he won’t: He just might run into the driver that cost him the victory last year — Don O’Neal — after the two mixed it up in the final laps in a desperate attempt to catch Owens.

Once O’Neal bashed down the crown jewel door at last year’s $100,000-to-win Dream, he’s been going back for more with Knoxville, DTWC and now North-South 100 victories to his credit. He’s been winning everything this season, racking up 14 overall and topping all winners on the Lucas Oil Series.

Why he won’t: While he's added a tinge of patience to the most aggressive right foot in the sport, Eldora is a place aggressive drivers can find trouble in a hurry.

The record-holder in World 100 starts with 22, Bloomquist is always in the mix at Eldora, even during a six-victory season where he’s been in the mix but not always in victory lane. Although he’s winless since June 30’s Firecracker 100 at Lernerville — where he survived a challenge from Lanigan — he’s been qualifying up front everywhere he goes.

Why he’ll win: If there’s even been a driver that can literally will himself to the front, Bloomquist is it.

Why he won’t: He’s missed the top-five in three straight starts at Eldora. Is his Eldora success tailing off?

After his well-documented struggles in 2011, Francis has been rejuvenated this season in the Barry Wright Race Cars house car, notching six victories including the recent Topless 100 in Batesville, Ark. The pairing of a veteran driver and veteran chassis builder has perhaps exceeded expectations.

Why he’ll win: Before his fourth-place finish at June’s Dream, Francis hadn’t cracked the top five at Eldora in forever — 2007 to be exact. With Wright, he’ll take the next step.

Why he won’t: He’s closer to cracking the Big Five than anyone, but topping that bunch is a daunting task.

It won’t be long until we’re calling him the “ageless” Billy Moyer as the 54-year-old continues to confound his foes and age experts with his stellar performances. Still leading the nation in touring victories? Something’s gotta give.

Why he’ll win: His Dream-World 100 sweep of 2010 didn’t satisfy a driver who likes to win at Eldora more than anywhere else.

Why he won’t: He’s fresh off the longest dry spell of 2012, and before his 2010 magic, Moyer made the feature lineup in just one — one — of his previous eight Eldora big-race starts.

The 24-year-old bid adieu to dirt racing in April as he tackled the NASCAR Nationwide Series, but he’s dropped in for a few dirt races just to let us know he hasn’t forgotten how to sling it sideways. He’s got a couple of World of Outlaws victories in just a handful of series starts.

Why he’ll win: After feeling pressure last season to win his first biggie at Eldora before making his asphalt jump, he’ll enter this event with a clear head.

Why he won’t: Things change quickly for those who step away from the dirt racing world. And besides, he’ll have to outrun his potent replacement in the Rocket Chassis house car, Brandon Sheppard.

Clanton came from seemingly nowhere to earn $100,000 at June’s Dream, joining the small club of drivers who have both Dream and World 100 victories to their credit. He and teammate Tim Fuller are on a virtual island in their Capital Race Cars, but he hasn’t let that slow him down.

A driver critics dismissed as not taking the sport seriously, Blankenship proved he belong in 2011 and has continued it this season, running among the top five in points on the Lucas Oil Series while clicking off a couple of big victories (and a few near-misses, including runner-up at the Dream).

Why he’ll win: He’s paid his dues and is knocking at the door for a career-making victory.

Why he won’t: Eldora is a stingy mistress, and allowing a driver to win with just six big-race feature starts under his belt isn’t her way.

Among the very best drivers in the country not following a national tour, Carrier’s last-ditch slide job at last year’s World nearly robbed Owens of his second globe trophy. Despite missing early season races with a ruptured Achilles, Carrier is right on track with another season of double-digit victories.

Why he’ll win: No worse than seventh in his last three Eldora starts, he’s ready to take that final step.

Why he won’t: Does he have the killer instinct necessary to outrun the sport’s best?