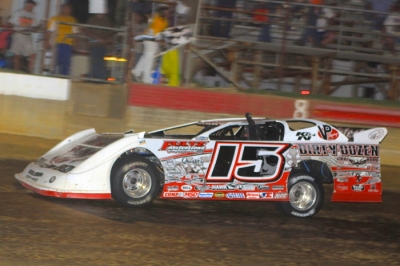 BANNER, Ill. (June 19) — Jon Henry of Ada, Ohio, turned back challenges from Shannon Babb of Moweaqua, Ill., and survived a couple of close calls in lapped traffic to earn a $5,000 victory in the sixth round of the UMP DIRTcar Summernationals Tuesday at Spoon River Speedway. | Complete Summernationals coverage

Henry started from the pole of the 40-lap feature and got the jump on second-starting Babb on the race’s initial start. He led the entire distance on his way to a career-high payday for his first-ever victory on the 29-race tour that visits 28 racetracks in 32 days.

The breakthrough victory was bittersweet for the 26-year-old driver, who was without crew members or family Tuesday night as he follows the grueling Summernationals tour on his own.

“When I took the checkered flag I had tears in my eyes because I knew my dad was gonna be happy and mad at the same time — because I know he wants to be here,” said Henry, the 2011 champion on the Sunoco American Late Model Series. “To win a Summernationals race and win $5,000, it’s a huge win. I just wish dad and my crew guy John and all them could be here for it.”

Babb settled for the runner-up finish with Brian Shirley of Chatham, Ill., taking third. Billy Drake of Bloomington, Ill., was fourth with Scott Bull of Fairbury, Ill., rounding out the top five in a race slowed by just two cautions.

Henry dominated the majority of the race, pulling to nearly a straightaway advantage at times. Babb only closed when Henry was stuck behind slower traffic on the 3/8-mile oval’s locked-down surface.

Babb began putting heavy pressure on Henry on lap 27, causing Henry to work harder to find a way around Lierly. A slip up the racetrack in turn four opened the door slightly for Babb on lap 29, but Babb didn’t force the issue with only a nose under Henry down the front straightaway.

The race’s defining moment came on lap 31 when Henry got into the back of Lierly in the center of turns three and four, turning his own car sideways and nearly spinning out.

However, Henry corrected his machine before Babb could capitalize, and a caution one lap later gave him clear track. Henry pulled away on the final restart before Babb closed back in over the final three laps. But Henry held on to score the victory.

“I just knew if I kept hitting my marks it would be so difficult for Shannon to get underneath me,” Henry said. “I kinda got into (Lierly) a little there and got sideways and was like ‘OK, now I just need to settle down and ride.’ Thankfully the caution came out and it didn’t matter.”

Babb, the reigning Summernationals champion, posted his fourth top-five finish in six series events. He has finished in the top 10 of all six events and unofficially took the series points lead with his runner-up effort Tuesday.

“We got into lapped traffic there and one time he kinda got crossed up. But I race guys like I want to be raced. … I didn’t think it would be right to get into him,” Babb said. “If he’d messed up a little bit farther, I’d tried to sneak by. But he was really good tonight. He got the jump on me and it was over.”

Billy Moyer Jr. of Batesville, Ark., entered the event atop the standings after winning three of the tour's first five races. But he struggled for most of the night Tuesday after mechanical issues forced him into his backup car just before hot laps. He used a provisional to make the feature lineup and finished 19th.

Jon Henry got from the pole in tonight's main event after a redraw among heat race winners. Shannon Babb will join him on the front row while Brian Shirley and Billy Drake will share row two. ... Billy Moyer Jr. and Bobby Pierce will start the main event using series provisionals while Frank Heckenast Jr. will use the UMP national points provisional and Todd Bennett will use the track provisonal. ... If Jon Henry wins tonight’s main event, victory lane will likely be much less crowded than if anyone else were to win. Henry is completely alone at tonight’s event after family and crew members had to head home to Ohio following the tour’s event Sunday at Wilmot (Wis.) Speedway. Without crew members, Henry’s night has been plenty busy. He finally found the time to stop to try one of the track’s famous Spoonburgers not long after his heat race victory. “I’ve been so busy, I’ve just now had time to eat,” Henry said. “Right now, I just want to make it through the night. I’m really trying not to worry too much about the race. I just telling myself to take it easy and as long as I get a top five I’ll be happy.”

Polesitter Jerry Lierly moved to the lead on the start of the B-main and led every lap to win the caution-free race. Mark Voigt ran second the entire distance in a race that was contested mostly in the track’s bottom groove. Voigt will join Lierly in transferring to the main event. Series points leader Billy Moyer Jr. started on the tail of the field and made a handful of laps before pulling in. He’ll use a provisional to make the feature lineup.

Steve Lance Jr. started from the pole and led every lap on his way to winning the C-main. He earned a transfer to the B-main along with runner-up Frank Heckenast Jr. The race was slowed by two cautions. The first came with two laps complete when Kathy Jarvis spun in front of Duke Whiseant, who eventually pulled off the track. Jarvis went off the top of the racetrack later in the race to cause the second caution.

Polesitter Shannon Babb moved out front on the start and led every lap of the caution-free race. While Babb pulled away to a convincing victory, Dennis Erb Jr. moved forward from his sixth starting spot and overtook Brandon Sheppard and Ryan Unzicker late in the race to score the runner-up finish. Erb passed Unzicker with a drive off the top of the track down the back straightaway and back to the middle groove at the entrace of turn three. Unzicker finished third while Sheppard grabbed the fourth and final transfer spot.

Outside polesitter Jon Henry grabbed the lead on the start and held off third-starting Rusty Schlenk on a pair of restarts on his way to winning the 10-lap prelim. Schlenk settled for the runner-up finish with polesitter Scott Schmitt third. Jason Riggs came out on top of a race-long battle between multiple cars for the fourth and final transfer position. The race was slowed for debris with a single lap complete and again midway through when Duke Whiseant spun while battling for fourth.

Polesitter Billy Drake got the jump on Mike Spatola on the start of the race and held off third-starting Randy Korte for the victory. Mark Burgtorf charged from his seventh starting spot and overtook Nick Bartels and Spatola on the final lap to finish third. Spatola was ahead of Bartels at the finish and will join the top three finishers in transferring to the main event. The initial start was waved off, but ran caution free otherwise.

Polesitter Brian Shirley faded back to third on the race's initial start, but rallied on the high side to overtake Jason Feger and outside polesitter Scott Bull on his way to winning the 10-lap prelim. Bull, who powered to the lead on the start and led the first three laps, finished second in the caution-free race, more than a straightaway behind Shirley. Feger held off Jason McBride in a close battle for third. McBride settled for the fourth and final transfer position.

Shirley will start from the pole of one of four heat races coming up at Spoon River. Each --lap prelim will transfer four drivers to tonight’s 30-lap main event that pays $5,000 to the winner.

Tuesday’s event is the sixth round of the 29-race tour that visits 32 racetracks in 28 days.

Series points leader Billy Moyer Jr. of Batesville, Ark., struggled qualifying. He was forced to go to a backup car after his crew discovered mechanical issues in his primary car just before hot laps.

After five races and the tour’s first off night on Monday, Billy Moyer Jr. of Batesville, Ark., leads the points standings on the momentum of three victories. Moyer’s 327 points puts him ahead of reigning series champion Shannon Babb of Moweaqua, Ill., (318); Brian Shirley of Chatham, Ill., (300); Ryan Unzicker of El Paso, Ill., (262); and Brandon Sheppard of New Berlin, Ill. (255). … Randy Korte of Highland, Ill. and Jason Riggs of Harrisburg, Ill., are among drivers making their first appearance on this year's tour. … Riggs enters the event following his first victory of the season Saturday night at Clarksville (Tenn.) Speedway. The 24-year-old driver plans to enter the majority of the tour’s events over the next two weeks. … Duke Whiseant of Texarkana, Ark., is back on the tour after skipping the three-race trek to Wisconsin. Whiseant, who struggled in the tour’s first two events at Brownstown (Ind.) Speedway and Kankakee (Ill.) County Speedway last week, said his team is much more prepared after making repairs and adjustments to his MasterSbilt Race Car and testing Sunday in Texarkana. … Former UMP national champion Rusty Schlenk of Weston, Ohio, is looking to make his first start at Spoon River. … Jon Henry of Ada, Ohio, also making his first visit to Spoon River, is still on the tour even after his crew members had to head home and back to work after Sunday’s race. “I’m sticking with it as long as I can,” said Henry, who started the tour hoping to run all 29 races. … Both Jason Feger of Bloomington, Ill., and Mike Spatola of Manhattan, Ill., were late arriving to the track when Spatola’s hauler had a flat tire and Feger’s team stopped to help change it. Luckily for the two drivers, extended track prep has delayed the start of hot laps.