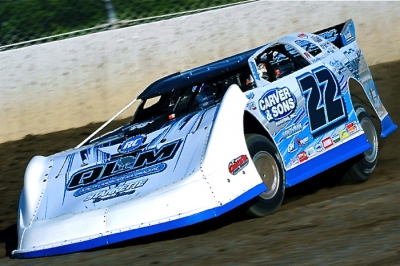 “There’s only been like one year when we haven’t been in the top 20 in qualifying,” said Ferguson as he took a break from the hot afternoon Ohio sunshine. “We just overheated last year and we jumped the cushion the year before that.”

With those two incidents behind him, Ferguson is hoping to build on the success of last year’s World 100, which he did qualify for. Ferguson is cautiously optimistic, and for good reason.

“The biggest thing is that I know my car is fast,” he said “I know that it’s fast when the track was kind of wet. It’s just hard to make those adjustments when you don’t know exactly what the track will do, especially when you only race here twice a year.”

Ferguson credits part of his success last September to Warrior Race Car’s Sanford Goddard. Goddard helped with the team’s set-up in the main event. That’s notably important to a family-owned team that races on a much smaller budget that most of the national touring stars.

With his single car hauler parked near the backstretch wall at Eldora’s massive half mile oval, Ferguson takes a little pride in his team’s effort.

“It means a great deal to us,” said Ferguson, “especially with a single car hauler and a lower budget than other guys. But I’m not going to knock it. We have a new car and a new motor. We spend the money on the right things and try to race the right way. We’re not going to spend money on things we don’t need.

“We only have one car and one motor, and that’s kind of a big risk coming up here.”

With that in mind, Ferguson said he’d have to race smart when he rolls out from the second row of Saturday’s fourth heat. He’s scheduled to start behind Darrell Lanigan, with Jeep VanWormer on the outside front row and Dennis Erb, Jr., to his immediate right.

“I know I have a fast car … good enough to make the show,” Ferguson said. “You have to find the right balance between being patient and being aggressive. But you have about 15 other drivers out there thinking the same thing.”

He added that starting near the front is a step in the right direction.

“Last year I made it into the World 100 from a B-main and I started up front in the B-main,” he said. “The year before that I started kind of in the middle. I can go ahead and tell you that starting up front helps. You kinda get to choose more track.

As the call for the night’s driver’s meeting nears, Ferguson said he’s eager to turn his luck around at the track affectionately known as the Big E.

“Like Dustin Jarrett just said, I think I have had some of the worse luck than anybody coming up here,” Ferguson said. “But you ain’t gonna turn it around by sitting at home.”