Notes: Byars excited for his second run at Eldora 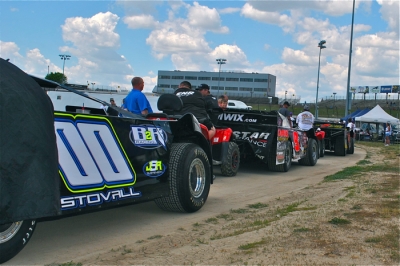 ROSSBURG, Ohio (June 7) — Klint Byars of Carrollton, Miss., has looked forward to returning to Eldora Speedway ever since he made his first trip to the track for last year’s World 100.

That’s not very surprising considering Byars was dominating a heat race before a flat tire spoiled what was shaping up to be an impressive debut at the historic half-mile oval. | Complete Dream XVIII coverage

Even though his first trip didn’t end as well as he hoped, Byars immediately fell in love with Eldora’s high-speed surface. He’s making his return to Eldora this weekend to compete in the $100,000-to-win Dream XVIII that kicks off with time trials Friday.

“It was one of the deals where ya fall in love on the first lap,” Byars said during Thursday’s Dream tech day that saw 76 Late Models fill the Eldora pit area. “I really like the place and we ran good here last year. I couldn’t wait to get back. I’ve been sitting there eating my fingernails off waiting on Dream week so I could come back and try it again.”

Unfortunately for Byars, his World 100 trip last year marked the start of a winless streak that has lingered through the first half of this season. Byars has been in contention in plenty of events this season, but bad luck has prolonged his drought.

“It makes it kinda tough coming up here because you don’t know what’s gonna go wrong,” Byars said. “We’ve been there quite a few races this year and just had stuff go wrong or couldn’t quite get it done. It’ll take its toll on you as far as being mentally ready.”

In hopes of turning his luck around, Byars has brought out his older race car he used to score eight victories and the Mississippi State Championship Challenge Series title last season.

“We come up here with my old car and I haven’t ran it since Arizona (in January),” Byars said. “It’s got a new motor in it, so we’re hoping it’ll turn this luck around.”

Carrier of Salt Rock, W.Va., posted top-five finishes in both the Dream and World 100 last season, including a runner-up finish in the World. But even with his solid performances last season Carrier knows running well in Saturday night’s main event won’t be easy. In fact, just making the feature lineup will be a challenge.

Carrier returns to Eldora after getting a late, but solid start to the season. Just before heading south in February to compete in Florida Speedweeks, Carrier suffered an angle injury while playing basketball, forcing him to have surgery that pushed his season’s start back to April.

Carrier was worried his performance would suffer this season due to his extended time off, but he was pleasantly surprised by a strong start to the year.

“It was hard setting there because we were ready to go to Florida and ready to get after it, then had the injury,” Carrier said. “Then when we come out and started performing like we was performing, I was kinda shocked that we did because sitting around sometimes you kinda loose a little bit of edge, but we come right out of the box and was pretty good.”

For the first time since 2004, someone other than Josh Richards will drive the Rocket Chassis house car in one of Eldora Speedway's crown jewel events this weekend.

Brandon Sheppard of New Berlin Ill., who took over the ride when Richards of Shinnston, W.Va., left earlier this year to pursue a career NASCAR, will pilot Mark Richards' familiar blue No. 1 in this weekend's event.

Since taking over his ride, both Sheppard and the house car crew have been challenged in learning each other.

"The biggest adjustment we've had to make as a team is figuring out what we need to adjust for me as a driver compared to what they do when Josh was driving," Sheppard said "It's similar; it's just little stuff that I'm still learning."

Sheppard has relied on Josh Richards for advice during the adjustment process.

"If I ever need anything, driving tips or anything, I talk to him. He helps me out a lot," Sheppard said.

Set to make his first laps around Eldora Speedway Friday night, Tyler Reddick of Corning, Calif., has already had a couple of days to check out the high-banked half-mile oval between Wednesday’s Prelude and Thursday’s Dream tech day.

For a driver who had never even seen a picture of the track much less seen it in person, perhaps the best way to get a head start in becoming familiar with Eldora is to compare it to other tracks he’s raced at.

In doing that, Reddick compared Eldora to Knoxville (Iowa) Raceway, which is good for Reddick because Knoxville is a place where he’s ran well in the past.