O'Neal eager to gun for repeat at Dream XVIII 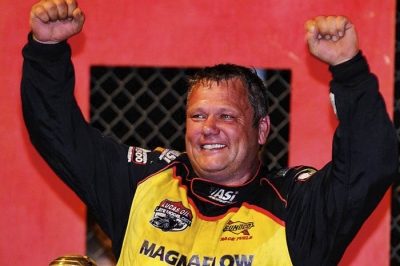 As far as Don O’Neal is concerned, there’s no place like Eldora Speedway.

The veteran driver from Martinsville, Ind., loved the high-banked, half-mile oval before he won last year’s $100,000 Dream by Ferris Commercial Mowers. He’ll still love it no matter how his drive for a second consecutive victory in the UMP DIRTcar-sanctioned spectacular ends up this weekend.

“It’s my favorite racetrack to go to,” O’Neal said of the famed facility that sits in the farmlands of western Ohio. “The atmosphere, the racetrack itself — it’s just one of a kind.”

O’Neal, 47, has been making regular pilgrimages to Eldora for nearly two decades. Last year he finally broke through to capture one of the track’s two annual crown-jewel events — after making a combined 18 feature starts in the Dream and World 100 — but his affinity for the Big E had already been well established.

“The atmosphere of that place is just so special,” O’Neal said. “You don’t get that kind of feeling at any other place, which makes it stand out so much. When you roll down that road to enter the racetrack and see all those campers and people, if that don’t charge you up as a racer, you’re probably not a real racer.”

O’Neal certainly qualifies as 100 percent racer. A two-time UMP Summernationals champion known for his hard-charging style, he proved last year that he has the ability to get the job done in the division’s prestigious long-distance events. He followed his Dream triumph with big-money, century-grind wins in the Silver Dollar Nationals at I-80 Speedway in Greenwood, Neb., the Knoxville Nationals at Knoxville (Iowa) Raceway and the Dirt Track World Championship at Atomic Speedway in Alma, Ohio.

The Dream, of course, was the race that stood out for O’Neal, who drives the MasterSbilt Race Cars house car.

“We come close a year or two and never got the job done,” said O’Neal, whose best finish in eight previous starts in the 100-lap Dream was third, in 2002. “Then when we finally did it — man, it’s just means more to me than anything I’ve done in my career. I don’t want to take away anything from any other racetrack or races I’ve won, but just to win a big race there at Eldora is really, really special.

“Just winning the race is what’s so special. I mean, the money was just a bonus. To get out there on that (homestretch) stage — I just hope every racer can do that, because it’s the most awesome thing you can ever do.”

O’Neal heads back to the Dream as a favorite to visit that hallowed Eldora winner’s stage again — an accomplishment that would make him the first driver to capture the Dream in consecutive years since its inception in 1994. Thanks to his sparkling ’12 performance (eight Lucas Oil Late Model Dirt Series victories to date), he sits among a group of five drivers — all former Dream winners — who are widely acknowledged as the country’s hottest dirt Late Model racers, joining Scott Bloomquist of Mooresburg, Tenn., Darrell Lanigan of Union, Ky., Billy Moyer of Batesville, Ark., and Jimmy Owens of Newport, Tenn.

Being on the short list of favorites to win Dirt Late Model racing’s richest single first-place prize amazes O’Neal, who this weekend will run the same MasterSbilt No. 71 that he drove to victory in last year’s Dream and a third-place finish in the World 100. The machine has not seen action since last September’s World 100.

“It’s awesome to be considered one of the guys to beat,” said O’Neal, “but it really just means that the drivers and the crews and owners have done their jobs to be able to get us there. It’s a lot more than just the driver that has got us in that top five (list of Dream favorites). You gotta look down a lot deeper and give the teams a lot more credit than us drivers.”

O’Neal is certainly ready to do his part, though. No one could expect anything less from him, especially at Eldora. It’s a track at which he needs no extra incentive to perform.

“Eldora is somewhere where you just really gotta get up on that steering wheel,” said O’Neal. “I just love places like that.”

The Dream weekend will kick off on Friday night (June 8) with the traditional time-trial runs and newly-created qualifying features to fill Saturday’s six heat races. In addition to the heats on Saturday evening (June 9), the Dream will be preceded by C- and B-mains and new scramble races.