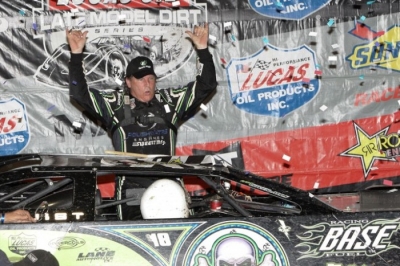 Bloomquist, the two-time and reigning series champion, led all 100 laps at Magnolia Motor Speedway for a $20,000 victory as he steadily works on regaining the points lead he lost to Jimmy Owens of Newport, Tenn., in early June.

"The car was just flawless again tonight," said Bloomquist, who closed to within 15 points of Owens after his series-leading eighth victory of the season. "I can't say enough about how well we are running."

The 47-year-old Bloomquist reeled off four straight series victories in April, stumbled with a series of accidents and sub-par performances in June, but is right back on track after a pair of Fourth of July weekend victories in Ohio and his lucrative Mississippi triumph.

The only thing to slow the polesitting Bloomquist at Magnolia was evening rains that delayed the night's racing action, but once Bloomquist went to work, he stayed in control all the way, leading comfortable in the final stretches.

Eighth-starting Billy Moyer of Batesville, Ark., who became the fourth driver to hold the second spot in the first half of the race, settled for second with 11th-starting Steve Francis of Ashland, Ky., in third. Earl Pearson Jr. of Jacksonville, Fla., rallied from his 10th-row starting spot for fourth and Owens rounded out the top five.

Bloomquist bolted into the lead at the outset with Shane Clanton of Fayetteville, Ga., in two, but Clanton was already headed pitside by the second lap in a race slowed by 11 cautions.

Chris Brown of Spring, Texas, picked up the second spot and gave chase before Owens took over, tracking Bloomquist until a lap-26 caution for heat race winner Mike Marlar of Winfield, Tenn. Moyer battled Owens for several laps through two more race stoppages before taking second for good on lap 34.

But Bloomquist had built a commanding lead by the time Moyer was in second, and Bloomquist ruled at halfway with Moyer, Owens, Francis and Pearson giving chase. It was more of the same in the second half of the race as Bloomquist wrapped up the series-leading 34th victory of his career.

Notes: Bloomquist's self-designed chassis is powered by a Roush Yates Ford engine and sponsored by Miller Bros. Construction, Base Racing Fuels, Hoosier Tire, Lane Automotive and Sweet Mfg. ... The race was sponsored by the Columbus-Lowndes County Convention and Visitors Bureau. ... The 100-lapper lasted 1 hour and two minutes. ... The last of 11 cautions appeared on the 97th lap when the second-running Billy Moyer lost the breather of his No. 21. ... The Speed cable network is scheduled to telecast the event at 1 p.m. (EDT) on July 31. ... Among drivers failing to make the feature: Frank Heckenast Jr., Brian Rickman, Scott Creel, Eric Wells, Jason McBride, Billy Ogle Jr., Shep Lucas, Steve Bryan, Morgan Bagley, Anthony Burroughs, Scott Dedwylder and Josh Putnam. ... Wendell Wallace entered prelims but left for Clarksville (Tenn.) Speedway, where he earned $10,000 Saturday in a UMP DIRTcar Summernationals event. ... Next up for Lucas Oil Series competitors is the $20,000-to-win Battle for the Beach July 14-15 at Tri-City Speedway in Granite City, Ill., following by the $10,000-to-win CMH Diamond Nationals at Lucas Oil Speedway in Wheatland, Mo., on July 16.