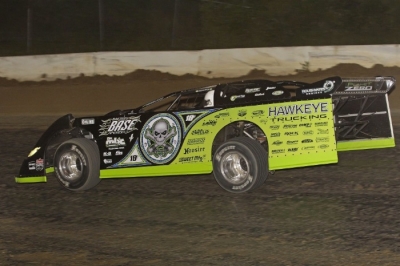 Scott Bloomquist was among the fastest cars in Thursday's practice at Batesville. (Woody Hampton)

LOCUST GROVE, Ark. (May 19) — Preceding a weekend when a winning driver and lucky fan will hear that famous line by the Price is Right's Bob Barker — "A brand new car!" — more than 45 drivers practiced Thursday at Batesville Motor Speedway.

Lucas Oil Late Model Dirt Series competitors from 14 states tuned up at the 3/8-mile oval just southwest of Batesville for the inaugural Bad Boy 98, which pays $10,000 to the winner along with a special trophy: a 2011 Chevrolet Camaro. A fan linked to the winner through a drawing before the race will also leave Saturday night with a 2011 Ford Mustang. | Complete Batesville coverage

Time trial qualifying and heat races are scheduled for Friday night at Batesville with consolation races and the 98-lap main event scheduled for Saturday.

Darren Miller of Milledgeville, Ill., hasn't competed at Batesville since the 2008 Topless 100, but after shutting down his family-based team in early 2009, he's still getting geared up with Davenport, Iowa-based Diercks Motorsports.

"I'm excited about it. I'm excited to have this team," said the 34-year-old Miller, who clicked off a couple of special event victories in the second half of 2010. "I think we're going to have some pretty good things going when we get everything together. We're still in the beginning stages of it. We've been doing some testing and stuff, and I think once we get everything going, it's going to be a good deal."

Most of Miller's 2011 racing is still to come with planned starts in several UMP DIRTcar Summernationals races and other major events with a team that has a background in short-track asphalt racing.

"We've just gotta get back on track with the car," Miller said of the Victory Circle Chassis the team entered at Batesville. "We've only been out a few times this year and we're testing a lot of stuff that wasn't typical setup stuff ... we're trying to get back on track with our regular program this weekend. If we can just have a good solid run and and get comfortable in the car, I think we'll have a good run if we can get the car back to that place."

Miller's best career run at Batesville came in 2006 when he was the second quickest qualifier among 66 drivers at the Topless 100, winning a heat race and the dash to earn the pole position. Scott Bloomquist ended up leading all 100 laps, but a slower car's flat tire on the last lap upset the single-file pack of frontrunners, allowing Miller to make an outside charge to briefly grab the lead in turn four heading for the checkers.

As it turned out, Miller's car lost traction and Bloomquist zipped back underneath for a $45,000 victory, leaving Miller with a $20,000 consolation price.

"I should've tried it a lap sooner," Miller said Thursday. "I didn't realize it was going to be that good out there. If I'd have known it, I think I could've won the race. It's one of them deals. Hindsight's 20-20, I guess."

Former modified ace R.C. Whitwell of Tucson, Ariz., is back at Batesville, this year in a car for Poplar Bluff, Mo.-based Rushin Motorsports after his deal with New Mexico car owner Jeff Sires fell through.

Whitwell was impressive at January's Wild West Shootout at his hometown track in equipment for Sires, who planned to base Whitwell at Rushin's shop. After the split with Sires, Whitwell still ended up in Poplar Bluff for a season-long run on the MARS DIRTcar Series.

"Steve gave me an opportunity to travel with him this year," the 25-year-old Whitwell said. "I was driving for Sires, and that Sires deal ended pretty quickly in the season, and Rushin gave me the opportunity to drive his stuff the rest of the year. ... I was just lucky enough he picked me to drive it."

The split with Sires of "kind of frustrating" as Whitwell tries to get his Late Model career rolling in the Midwest, but he plans to make the most of his opportunity with Rushin, driving as a teammate to Missouri pilot Jesse Stovall, another former modified standout.

Whitwell has been steady if unspectacular so far this season, but hopes for bigger things when the team enters major events like Batesville during 2011.

His goals are to "definitely to aim for finishing the races and making the shows, and just trying to run up front as much as possible, and eventually a win will come," he said.

As most drivers graduating from lower-budget Crate Late Models into the Super Late Model division, Chip Brindle faced a learning curve and the expectation that'd he'd take his lumps early in his rookie season.

But the 25-year-old Chatsworth, Ga., driver for Bryson Motorsports came out of the gate quickly, posting a handful of top-five finishes and knocking off a STARS Volunteer Racing Series victory as his hometown track in his eighth Super Late Model start of the season. That success changed the team's outlook somewhat heading into the thick of the season.

"It definitely does," said Brindle, among three drivers making his Batesville debut. "You fall in here and you start running good with these guys, and then you win a couple, it definitely makes you want to do even more in the game."

The Bad Boy 98 is the first of several major events Brindle plans on attacking in 2011, a list that includes next week's Show-Me 100 at Lucas Oil Speedway in Wheatland, Mo., and Dream XVII at Ohio's Eldora Speedway next month.

"We're just going to try to hit as many as we can this year and get our feet wet, then hopefully follow a series next year," said, Brindle, who has made the adjustment to the higher-powered cars.

"It's definitely a big adjustment, and not only that you're running for with all these guys that that's what they've done all their life. You've just gotta try harder and work on your stuff, and with the right help from all your sponsors, make stuff happen."

With a 50 percent chance of precipitation on Friday (and less of a chance Saturday), everyone's keeping an eye on the weather at Batesville after a unsettled spring that has wreaked havoc on the racing schedule.

Plans are obviously to stick with the Friday-Saturday schedule weather permitting, but promoter Mooney Starr has already considered alternate plans if necessary.

If Friday's preliminaries are rained out but the track is raceable on Saturday, Batesville would likely host a single-day event with a consolidated format and purse.

If Friday's preliminaries are completed but rain halts Saturday's action, Starr is considering moving the makeup to August's Topless 100 weekend. In that case, practice would be set for Wednesday, Topless 100 prelims for Thursday, the Bad Boy 98 makeup Friday, and Topless 100 main event on Saturday.

Scott Bloomquist clicked off some of the fastest practice laps, according to several stopwatches. ... Besides Chip Brindle, first-time Batesville visitors are Frank Heckenast Jr. of Frankfort, Ill., and O'Reilly SUPR points leader Morgan Bagley of Longview, Texas. ... Several teams will stay in the Ozark region for a 10-day stretch with Wheatland, Mo.'s Lucas Oil Speedway hosting the $30,000-to-win Show-Me 100 on Memorial Day weekend. ... Scott James of Lawrenceburg, Ind., practiced two cars for the Harrisburg, Ill.-based Riggs Motorsports team, one a brand new Rocket Chassis. ... The only incident during Thursday's practice was minor. Jason Cliburn spun in turn three, and fellow Mississippi driver Klint Byars made only slight contact. ... Gary Christian's team had an eventful trip from Broken Bow, Okla. A tire broke loose on the hauler, damaging the team's trailer. They made repairs and made it to the track. ... Chase Washington, a 20-year-old from Houlka, Miss., is at Batesville after a Saturday night victory at Magnolia Motor Speedway in Columbus, Miss. ... Wells Motorsports teammates Mike Marlar and Eric Wells are settling back into their Rocket Chassis after running early in the season with Warrior Race Cars. ... Arkansas has the most entries so far with 15 of the 47 drivers running in their home state.