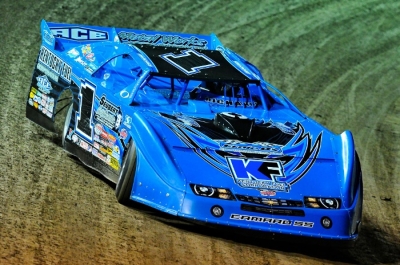 Josh Richards has been solid at Volusia heading for WoO's opener. (thesportswire.net)

BARBERVILLE, Fla. (Feb. 17) — Josh Richards is ready to begin his chase of a third straight World of Outlaws Late Model Series championship. And according to the Dirt Late Model press corps, the odds are good that the young sensation from Shinnston, W.Va., will accomplish the unprecedented feat.

Richards, 22, was voted the favorite to win the national tour’s 2011 points title in the fourth annual WoO Preseason Media Poll, marking the third consecutive year he has topped the voting. He was not, however, the overwhelming choice that he was a year ago as his prime pursuers in 2010, Darrell Lanigan of Union, Ky., and Tim McCreadie of Watertown, N.Y., received strong support.

More than three dozen writers, photographers and broadcasters who cover the WoO participated in the poll, which asked the press members to predict the top-five finishers in the tour’s 2011 points standings. Points were distributed to each driver named on the media ballots using a 5-4-3-2-1 system.

Richards tallied 161 points, buoyed by a poll-best 14 first-place votes. His name appeared on 40 of the 41 ballots that were submitted and he was predicted to finish among the top three in the points standings by 39 of the 40 media types who selected him.

Last year Richards continued his rise to national prominence, becoming the first driver in the modern era of the WoO to capture two titles. He kicks off his pursuit of a threepeat with his father Mark’s Rocket Chassis team at Volusia Speedway Park in Barberville, Fla.

Richards, who has been a WoO regular since winning the Rookie of the Year award in 2005, enters the 2011 season tied with Steve Francis of Ashland, Ky., atop the tour’s victory list since 2004, with 28 wins. He is also seeking his fifth straight triumph in Thursday's WoO season opener at Volusia.

McCreadie, 36, nipped the 40-year-old Lanigan by a single point, 131-130, to place second in the poll. A solid third-place finisher in the 2010 WoO standings in his first season as a regular since winning the 2006 championship, McCreadie was listed on 34 ballots with 11 first-place and 13 second-place selections.

Lanigan, who lost the 2010 points crown to Richards by four points in a battle that went down to the final race, appeared on 38 ballots — four more than McCreadie — but finished third in the poll results. The 2008 WoO champion garnered 10 first-place, five second-place and 14 third-place votes.

Francis, who won the WoO title in 2007, finished fourth in the poll, earning five first-place votes among the 32 ballots on which his name appeared and tallying 89 points. The 43-year-old standout heads into the 2011 season with a Barry Wright Race Car as his chassis of choice for the first time in 15 years.

Austin Hubbard, 19, of Seaford, Del., received substantial support from the media after his record-breaking march to the Rookie of the Year honor in 2010, finishing fifth in the poll. The teenage driver of Dale Beitler’s familiar No. 19 appeared on 20 ballots and totaled 39 points, highlighted by four second-place selections.

Shane Clanton, 35, of Fayetteville, Ga., was the only other driver to receive a first-place vote, picking up a single nod among the 20 ballots on which his name was listed and totaling 33 points to finish sixth in the poll.

Rick Eckert, 45, of York, Pa., and Tim Fuller, 43, of Watertown, N.Y., finished in a tie for seventh in the poll, collecting 12 points apiece. Both drivers’ names appeared on seven ballots and were listed as high as third, Eckert earning two third-place selections and Fuller one.

McCreadie and Richards were the top press choices in the biggest-winner category, with McCreadie receiving 16 votes and Richards earning 15.

Chris Madden of Gray Court, S.C., emerged as the favorite among the media to win the Commonwealth 100, which returns to the WoO schedule after a memorable debut last season. Madden, who won the inaugural event in 2010, received nine votes in balloting for the race.

Bloomquist, who won the inaugural Firecracker 100 in 2007, topped the polling for this year’s fifth annual event, picking up eight selections.

Bloomquist and Jimmy Mars emerged as the consensus favorites to win the 100-lap USA Nationals, which returns to the WoO for the second straight season. The former event winners received nine votes apiece. 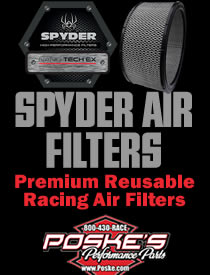