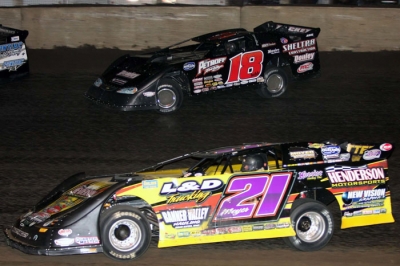 Moyer, 52, of Batesville, Ark., remained undefeated in the Illini 100 with a $20,175 triumph that closely mirrored his thrilling win over Babb in the inaugural race in 2008. While his victory margin wasn't quite as narrow as two years ago, Moyer grabbed the lead on lap 72 when Babb slipped over the turn-one berm while negotiating lapped traffic and then had to repel several frantic late-race challenges from the hard-charging Moweaqua, Ill., driver.

"That was a lot of fun," said Moyer, who became the seventh different winner in as many WoO events this season. "I like the kind of racetracks that you gotta chase like I did tonight. It was slick, and I think I ran every inch of it out there, every groove there was. That makes it fun for a driver, rather than just running in that one little spot."

Babb, 36, was a deeply disappointed runner-up after leading on three separate occasions during the highly-competitive event. Tim McCreadie of Watertown, N.Y., who started 17th, joined the lead battle with Moyer and Babb late in the distance but settled for third place, while Brian Birkhofer of Muscatine, Iowa, slipped to fourth at the finish after leading briefly before a mid-race caution flag and sixth-starting Don O'Neal of Martinsville, Ind., placed fifth.

"That's pretty ironic I guess, to run one-two like that again," said Moyer, who did not enter last year's Illini 100. "He's a good kid. ... I like him from back in the day when he ran for us (Babb drove cars owned by Moyer's father) and we're still good friends."

Moyer, who started seventh, had his Victory Circle Chassis up to third place when the race's first caution flag flew on lap 46 for the engine problems suffered by Rick Eckert of York, Pa. Then Birkhofer, who had become the first driver to supplant Babb as the leader when he slipped in front on lap 44, got off slowly on the restart, allowing Babb and Moyer to move into the top-two spots as lap 47 was scored.

Babb built nearly a straightaway edge over Moyer by lap 52, but less than a dozen circuits later the two drivers were in a battle for the lead. Moyer surged ahead to assume command on lap 64, but Babb split Moyer and a lapped car in turn three to regain the lead on lap 68.

The lead changed hands for the fifth and final time in the event on lap 72 after Babb ran out of racing room as he attempted to go around a lapped car and slid over the turn-one berm in his Sheltra Construction Rocket, handing the top spot back to a shocked Moyer.

"He'd done that twice before and he saved it," Moyer said of Babb's momentum-killing misstep. "Shannon drove the wheels off that thing every lap — you got to give the kid credit for that — but he just missed it that time. He was just trying so darn hard I guess.

"When I seen him slip there, I wanted to get in there and close the door before he could get back down. But when I went by he still had two wheels out there (over the berm), so I was in the clear."

Not for long, however. By lap 80 Moyer was being challenged by McCreadie, whose charge from deep in the field in the Sweeteners Plus Rocket car reached second place when Babb slipped out of the groove, and Babb was regrouping for another assault.

But even a final caution flag on lap 93 — for WoO rookie Austin Hubbard of Seaford, Del., who stopped along the backstretch — couldn't stop Moyer from recording his alltime-best 36th career WoO victory. He took advantage of the paint-trading race for second between Babb and McCreadie to open up some breathing room before reaching the checkered flag ahead of Babb with about four lengths to spare.

"I just told myself, 'Don't make a mistake,' " Moyer said of the final restart. "You just can't bobble. I feel like I made two of them in those last seven laps, but it turned out good for us I guess.

"We've raced against each other a lot and I know how (Babb) drives, so I just had to drive defensively," added Moyer, who registered his 14th WoO win since 2004 and first since April 15, 2008, at Lernerville Speedway in Sarver, Pa. "That's just part of being around as long as I have. On that last lap I was ready for anything because I knew he was eager and he'd be right there, so I kinda drove three and four a little differently to make sure nothing happened."

Babb couldn't hide his dejection after falling short in his home state's biggest and richest dirt Late Model event. He was terse with his post-race assessment of his defeat, complaining about his problems dealing with lapped traffic.

"We had a really good car on that restart (on lap 46)," said Babb, who started from the outside pole. "We got by Billy and Birkhofer, and got the lead."

But Babb's grip on the race was ripped away when he couldn't safely overtake a slower machine entering turn one on lap 72. He described his struggles trying to rally: "I lost four positions (before regaining speed) and had to try and come back, while those guys (lapped cars) are out there running that quarter-midget line from top-to-bottom. All in one lap they run the whole racetrack ... I don't know, it's frustrating."

McCreadie, meanwhile, twice appeared that he might be in position to win, but circumstances dive-bombed his hopes.

"We ran (Moyer) down (with 20 laps remaining) and I thought we might just roll right by him," said McCreadie, who turns 36 on April 21. "But then all of a sudden I kind of stalled out, and that was it.

"Then, when that yellow fell with about 10 to go, I thought, This is about the only chance I got. I knew we were gonna be good for about six laps, but I just never really got a chance to do anything."

That's because Babb darted to the inside of McCreadie on the lap-93 restart, stopping McCreadie's move on Moyer before it even started. McCreadie was able to nose underneath Moyer a couple times rounding turn two during the next two laps, but he ultimately spent too much time battling — and trading paint — with Babb to mount a last-ditch bid for the win.

"The only thing I can think is that Shannon laid back about five or six car lengths (coming to the restart) to get the type of a run he did down the homestretch," McCreadie said of the final restart. "I never saw him until we went into one. I looked over and he was there, and that pretty much killed the run I had on Moyer.

"I wish we could've had more fun racing for the lead rather than letting Billy get away from us like he did," added McCreadie, who took over the WoO points lead. "Us racing together like that for the last five laps probably cost both of us a shot at the win."

A huge two-week stretch for the WoO continues on April 16-17 with the inaugural running of the Commonwealth 100 at Bill Sawyer's Virginia Motor Speedway in Jamaica, Va. The two-day spectacular offers a $25,000 top prize from a total weekend payout of nearly $125,000.