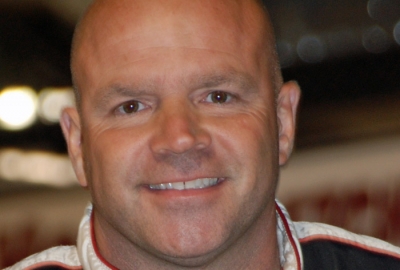 Veteran dirt racer Steve Shaver of Vienna, W.Va., has won big races throughout his career driving Rayburn Race Cars as well as Rocket Chassis. The 46-year-old driver gets a chance to win in both during Georgia-Florida Speedweeks.

Shaver will make his first start for the North Carolina-based Rumley team, which has fielded cars for standout drivers including Randle Chupp, Billy Hicks and another West Virginia driver, Steve Lucas.

"I am really looking forward to the opportunity to drive for Kevin and Lee Roy, not only in Georgia, but at other selected races in 2010," Shaver said. "They have Rocket cars which I'm very familiar with and always field top notch equipment that can win any time they unload."

After Golden Isles, he'll switch to a Rayburn house car for Lucas Oil Late Model Dirt Series action at East Bay, where he's a five-time Winternationals winner, most recently in 2007.

"In the past we have had success with C.J.'s cars and hope for great results this year at East Bay," Shaver said. "I have tremendous respect for C.J. and appreciate the chance to drive for him." — From team reports

No pressure for Hubbard

Some might think Austin Hubbard of Seaford, Del., will be on the hot seat at Volusia Speedway Park on Feb. 8-13 during UMP DIRTcar and World of Outlaws Late Model Series action. After all, he's just a 17-year-old tackling the World of Outlaws Late Model Series and he's trying to replace former WoO champ Steve Francis in Dale Beitler's successful car.

But Hubbard says he feels no pressure to perform from the 52-year-old Beitler, who has experienced plenty of success fielding cars for such drivers as Francis, Davey Johnson, Gary Stuhler and Steve Casebolt.

“This isn't me just being his driver, but Dale is one of the nicest, most giving people I've ever met,” Hubbard said recently. “He has a lot of confidence in me already, which he's said and he's told me, but he's put no pressure on me.”

Hubbard paused, and then said: “Eighty percent of the pressure is put on by myself, and 20 percent from Hog (crew chief Robby Allen). Not that Hog is on me, but this is his job, how he makes his living, and how I do is gonna reflect on him and what people think of him and his (chassis-setup consulting) business. He's putting his name on the line to help me. If he didn't think I could do anything he wouldn't help me no matter how much we paid him.”

Hubbard hopes for a better run at Volusia than in '09, when he made one of six feature events and blew three engines. — Kevin Kovac

Thanks to sponsorship from Dart Machinery, an extra provisional starting spot has been added to each night of the Feb. 1-6 action at East Bay Raceway Park.

In years past, Dart Winternationals events have started 25 cars — 24 transferring through preliminary races and the winner of the PRC Strawberry Dash. This year, each race will have 26 starters with the fastest qualifier who didn't transfer to the feature added to the last row.

"We have always valued our relationship with Dart Machinery, and are excited to see them step up in such a big way with the Dart Winternationals and now with the Dart Fast Pass," said Lucas Oil Series director Ritchie Lewis. "It just goes to show how much Dart Machinery gives back to the sport, to those that support them week-in and week-out." — James Essex