Daytona is part of busy Speedweeks for Richards 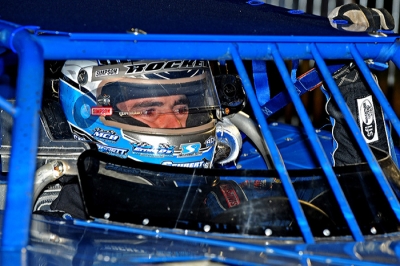 A busy Florida Speedweeks is on tap for Josh Richards. (jmsprophoto.com)

Josh Richards is ready for what just might be the first week in the rest of his racing life. With his national profile soaring in the wake of a World of Outlaws Late Model Series championship season in 2009, the 21-year-old sensation brings superstar status into the Dirt Late Model portion of the 39th annual DIRTcar Nationals by UNOH from Feb. 8-13 at Volusia Speedway Park. | Georgia-Florida Speedweeks previews

And if Richards can make some noise a couple days earlier in his stock-car debut at a certain nearby superspeedway, he’ll grab even more attention from the legions of race fans who make nightly pilgrimages to the half-mile Volusia oval every February.

Richards loves making the annual trek from his Shinnston, W.Va., home to the Daytona Beach area for Volusia’s big festival of speed — he has, after all, won the WoO season opener there in each of the past three years — but he’s never so eagerly anticipated heading south for the winter. As part of his bid to use his WoO title as a launching pad to NASCAR stardom, Richards will take his first laps in ARCA Racing Series competition at Daytona International Speedway before entering the DIRTcar Nationals.

“It’s going to be the most exciting Speedweeks ever for me,” said Richards, who also plans to complete in Lucas Oil Late Model Dirt Series action at East Bay Raceway Park near Tampa. “Running at Volusia is always fun because it’s one of my favorite tracks — and now I’m getting a chance to run at Daytona too while I’m there. It’s a dream come true.”

Richards has visited the famed Daytona tri-oval during past DIRTcar Nationals, but only to network and chat with such friends as two-time Sprint Cup champion Tony Stewart, who enters selected dirt Late Model events in a car that Richards helps prepare. Speeding around the high banks this year will be a new experience for the young talent.

Coming off a 2009 season that saw him enter a combined four pavement events on the NASCAR Camping World East Series (Greenville-Pickens, New Hampshire, Dover) and ARCA Racing Series (Kentucky Speedway) amid his busy Dirt Late Model schedule, Richards got his first taste of Daytona’s 2.5-mile layout during a late-December ARCA test. He turned more than 100 laps in a Ken Schrader Racing Chevy during the three-day practice session, ending the weekend with the 12th-fastest circuit overall (out of more than 80 drivers) at 182.120 mph.

Richards relished the experience he acquired during the ARCA test, which attracted an unusually large media contingent because it featured the first public stock-car laps taken by IndyCar starlet Danica Patrick. He’s anxiously awaiting his opportunity to qualify for the 200-mile ARCA event, which is scheduled for Feb. 6.

“It was a lot of fun to get out there (at Daytona),” said Richards, who was actually scheduled to sit next to Patrick on his connecting flight from Charlotte to Daytona but missed that chance because she swapped seats just before Richards boarded the plane. “I felt pretty comfortable right from the start. When you peel off down the backstretch for the first time you can’t help but wonder for a second if the car’s gonna stick in (turn) three, but you just say, ‘Hey, this car is made to go around here,’ and you put your foot down.”

Of course, Richards’s focus will shift to his Seubert Calf Ranches Rocket Chassis house car once he drives out of Daytona’s infield tunnel. There’s six nights of Dirt Late Model action on his plate at Volusia, including four UMP DIRTcar-sanctioned events (Feb. 8, 9, 10 and 12) and the season-opening 50-lap, $10,000-to-win programs for the WoO on Feb. 11 and 13.

Richards will attempt to win the WoO lidlifter for an unprecedented fourth consecutive year at Volusia, a track that has treated him very well. He also pocketed $10,000 for capturing last year’s UMP finale, becoming just the second driver since 2004 to win the week’s big UMP show and a WoO event during the same DIRTcar Nationals.

“I’ve always had pretty good luck there,” Richards said of Volusia. “I remember the first time we ran there back in 2005, I won a heat and was in contention to win. It’s a big, fast, sweeping track, and I just feel like it fits my driving style real well.”

But Richards understands that his spectacular record at Volusia is no guarantee of continued success in 2010. He expects this year’s DIRTcar Nationals to be a major challenge, and not merely because of the always-tough field.

“I think the (track) surface is gonna be a little bit different this year,” said Richards, who led the WoO with eight victories last season. “They put some new clay on it. I saw it when we went down there (in early December) to test (his planned session was rained out), and it looks like there’s less sand in the clay. I think it’s going to be fast when they get it wet.”

With Richards planning to defend his WoO title in 2010 unless a serious ARCA or NASCAR ride materializes, his Mark Richards Racing Enterprises team is geared up to spend another season on the road. Richards has two new and two rebuilt Rocket cars in his arsenal, plus a full complement of powerful Cornett racing engines.

Richards gives the lion’s share of the credit for his team’s meticulous off-season preparation to his mechanic Matt Barnes. That’s understandable, considering Richards’s busy off-season schedule made him largely absent from the race shop from shortly after he clinched the ’09 crown in early-November through Christmas.

“Matt was pretty much the Lone Ranger here for a month-and-a-half,” said Richards. “He stayed home and worked while we were away. If it wasn’t for Matt, there’s no way we’d be ready.”

Yes, it was a fast-moving off-season for Richards. In December alone, he went from the International Motorsports Industry Trade Show in Indianapolis (where his car was displayed), to three days of Dirt Late Model testing in the Southeast, to the Performance Racing Industry Trade Show in Orlando, to Charlotte for a seat-fitting in Schrader’s ARCA car, to Daytona testing. He even squeezed in a visit with West Virginia governor Joe Manchin III for a discussion about the state’s tourism arm lending some sponsorship help to his racing efforts.

“It’s like there’s been no off-season,” Richards said. “We’ve had so much going on, the days have just flown by. Before you even know it, it’s time to go racing again.”