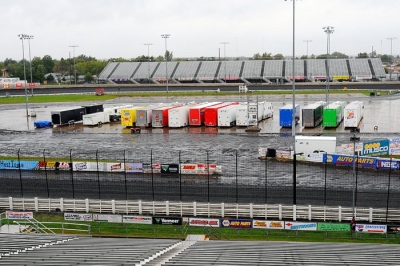 The sixth annual event has drawn more than 70 Super Late Models teams to the half-mile oval best known for sprint car racing, and Knoxville hopes it can salvage what has been a dreary week, said Brian Stickel, the track's director of marketing.

"Hopefully we'll get some of the best racing we've seen tomorrow and that'll be the story," Stickel said Friday afternoon while dodging raindrops behind the wheel of a golf cart outside turn four.

Saturday's program will be Late Models-only with hot laps beginning at 6:30 p.m. Time trials and heat races will be followed by a D-Main, C-Main, B-Main and the 100-lap feature event. Officials hadn't decided whether the format would employ the points system originally planned for the preliminary races or switch to a standard format, Stickel said.

If the rain has stopped Saturday morning as weather forecasts suggest, Stickel said officials are confident they can get the racetrack whipped into shape. Other concerns include the condition of the non-paved portions of the infield pits and the possibility that the sun won't come out Saturday to help dry off the facility, which can hold 24,000 fans.

"What's going to battle us is the clouds and cool weather," Stickel said. "We'd like to have a nice wide track, but it's going to take a lot of work to get there." — Todd Turner

GRT TAPS SULLIVAN TO PILOT HOUSE CAR: Joe Garrison of GRT Race Cars of Greenbrier, Ark., has tapped Greenbrier's Jack Sullivan to pilot the chassis manufacturer's house car beginning as soon as next weekend. "I think Jack is the perfect fit for our new house program," said Garrison, who has worked with standout drivers including Bill Frye and Wendell Wallace in previous years. "We wanted a driver that was young, full of energy, and ready to put GRT Race Cars back on the national map." The 33-year-old Sullivan, a veteran of modified and Late Model racing, may get rolling with the house car team as early as Oct. 9-11 with three season-ending Lucas Oil Late Model Dirt Series events in Alabama and Georgia. Other late-season events planned are the Coors Light Fall Classic on Oct. 23-24 at Whynot (Miss.) Motorsports Park and the Cotton Pickin' 100 on Oct. 30-31 at Magnolia Motor Speedway in Columbus, Miss. — Ryan Delph

McCREADIE MAKING RETURN TO SYRACUSE: For the first time since 2005, former big-block modified star and current Late Model star Tim McCreadie of Watertown, N.Y., will be a competitor during Super DIRT Week XXXVIII, chasing a $50,000-plus victory in the richest DIRTcar big-block modified event Oct. 7-11 at the famed Syracuse Mile. McCreadie, 35, hopes to get back up to speed at Syracuse at Oct. 7's practice session at the Moody Mile. “I feel good about our chances. I'm used to the speed (of the mile) because we go to a lot of high-speed places with the Late Model, so I think if we can get the car comfortable for me and setup right we should be OK," said McCreadie, who has never finished the Rite Aid 200 in nine career starts. “I grew up with Syracuse always being the big deal every year. All the major modified guys over the years have won it, so it's definitely one of the things I look at that I'd like to put on my resume." — Kevin Kovac

EAST BAY SETS WINTERNATIONALS SCHEDULE: East Bay Raceway Park near Tampa, Fla., has set the schedule for the 34th annual Winternationals with more Dirt Late Model events (13 total features than ever. The centerpiece of the action is Feb. 1-6 Lucas Oil Late Model Dirt Series events, capped by a $12,000-to-win Saturday night feature. The NeSmith Chevrolet-sanctioned. Crate Late Models are also in action Feb. 18-20. Added to the schedule for 2010 is March 3-6 racing sanctioned by UMP DIRTcar Racing and the C.J. Rayburn-founded National All Star Racing Association, a four-race stretch highlighted by a $5,000-to-win feature that wraps up six weeks of racing at East Bay. — From track reports

KAISER CLAIMS ULMA CHAMPIONSHIP: Kevin Kaiser of Cole Camp, Mo., edged Jeff Schlup of California, Mo., for the weekly points championship on the United Late Model Association, a Limited Late Model organization based in Warrensburg, Mo. Kaiser had four victories and nine runner-up finishes among his best 15 ULMA performances of the year as he notched victories at 24 Raceway in Moberly, Mo., Central Missouri Speedway in Warrensburg, and Callaway Raceway in Fulton, Mo. Kaiser finished with 1,474 points to top Schlup (1,472), who led all drivers with seven feature victories. Robbie Test of Jefferson City, Mo., was fourth in points (1,426) and took ULMA Rookie of the Year honors. ULMA drew 55 drivers for 59 total events in 2009. Kaiser will be honored at the ULMA banquet on Oct. 17 at the Moniteau County Fairgrounds Centennial Hall in California, Mo. — Sam Stoecklin

TWO SPECIALS COMING UP AT CLEVELAND: After a spate of rainouts, Cleveland (Tenn.) Speedway is scheduled to return to action with two special events for Super Late Models over a six-day stretch. The rain-postponed Jimmy Mowery Memorial set for Oct. 3 features triple 20-lap features paying $1,000-to-win apiece for the first two races and $1,500 for the third. Car Smart of Cleveland offers a $1,500 bonus if one driver wins all three features (a total take of $5,000) or $500 if a driver wins two of three. On Oct. 8, the track hosts the Ray Cook-promoted Tar Heel 53, a $5,000-to-win event previously held at Cook's hometown Tri-County Racetrack in Brasstown, N.C. The race will support Lana’s Love Foundation, an organization to help children with cancer and their families have fun. Rides in the Cleveland Speedway Driving School two-seat Late Model will be auctioned off to raise money for Lana's Love Foundation. — Bob Appleget and Chris Tilley

ODDS AND ENDS: Dirt Late Model racers Buck Simmons and Herb "Tootle" Estes are among those scheduled to be inducted into the Georgia Racing Hall of Fame on Oct. 23 in Dawsonville, Ga. ... Simmons Promotions has moved the Late Model Spec Engine Nationals to Dubuque (Iowa) Speedway instead of Farley (Iowa) Speedway. The Oct. 16-17 event pays $7,000 to the winner. Jeff Aikey of Waterloo, Iowa, won last year's event. ... The Badger State Nationals, set for Oct. 1-3 at Cedar Lake Speedway in New Richmond, Wis., was cancelled because of forecasts for inclement weather. ... The Carolina Clash Super Late Model Series has rescheduled its Sept. 26 rainout at Lancaster (S.C.) Speedway for Oct. 10. The race is part of the Countdown to the Cup, the playoff-style battle for the series title. ... Eastside Speedway in Waynesboro, Va., has scheduled a $2,500-to-win Limited Late Model feature as part of its Oct. 30-31 Halloween Havoc event. ... Hesston (Pa.) Speedway plans a $10,000-to-win, 88-lap event for Super Late Models on Oct. 8-10. The unsanctioned event was originally on the Unified Force Race Championship Series. ... The 19th annual Lake Cumberland Classic at Lake Cumberland Speedway in Burnside, Ky., has added sanctioning by the National All Star Racing Association, chassis builder C.J. Rayburn's new series. The $4,000-to-win Harold Hardgrove Memorial highlights the Oct. 23-24 weekend.