Moyer leads all but one lap for Magnolia victory 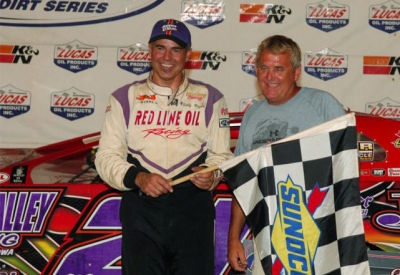 COLUMBUS, Miss. (July 11) — Hall of Famer Billy Moyer survived an early scrape with Bub McCool, a mid-race challenge from Earl Pearson Jr. and a late charge from Chris Wall for a victory at Magnolia Motor Speedway. The 51-year-old polesitter from Batesville, Ark., earned $10,000 for his second Lucas Oil Late Model Dirt Series victory of the season and 11th of his career in front of a packed grandstand at the 3/8-mile oval. | Slideshow

Moyer and McCool, of Vicksburg, Miss., started on the front row with Moyer taking command early through two caution periods over the first four laps. McCool's lap-four slide job attempt resulted in damage for both of the frontrunners, but the race stayed green.

Back-to-back cautions on the eighth lap kept things tight, but McCool started to fade as Pearson and Casebolt, who started eighth, moved up to chase Moyer. The frontrunning Moyer entered lapped traffic by lap 17 while running the high side, and Pearson closed in on the leader with Casebolt, Dale McDowell of Rossville, Ga., and Wall holding the top five spots.

Pearson maneuvered around Moyer to lead the halfway lap, but Moyer was back out front at lap 26 as they battled door-to-door. Moyer edged back ahead by five lengths after 28 laps while a terrific battle waged behind with Owens, Wall, Bloomquist, McDowell and Don O'Neal of Martinsville, Ind., looked for top-five spots.

Moyer's lead widened until a lap-35 caution for Jimmy Cliburn, who lost a wheel in turn one, setting up a 15-lap shootout to the checkers. Moyer led Pearson and Casebolt back to green, and Moyer edged out to a 10-length lead for what appeared to be a cruised to the checkers.

But with Moyer contending with traffic, Pearson closed in and Wall came seemingly from nowhere, overtaking Casebolt and then Pearson in the final laps. Wall ran out of time for a serious bid for the lead and settled for second and the PBM-Erson Cams Hard Charger honors.

Notes: Moyer's Victory Circle M1 Chassis is sponsored by nearby Cooley Trucking, Banner Valley Hauling, J&J Steel, Watters Auto Land, Karl Chevrolet and Minx Show Palace. ... Series points leader Scott Bloomquist had engine problems after qualifying and swapped powerplants, starting on the tail of the fourth heat. He ralled throughout the night before ending up sixth in the main event to salvage the night. ... Magnolia is the 50th track to host a Lucas Oil Series event. ... Next up for the series is a July 17-18 weekend at Tri-City Speedway in Granite City, Ill., and Lucas Oil Speedway in Wheatland, Mo. Both races pay $10,000 to the winner.