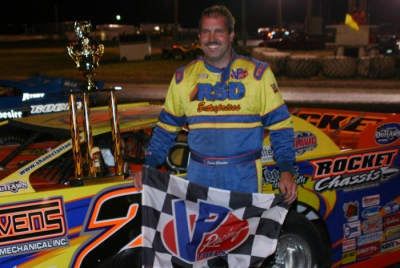 In an incident-free race that ran caution-free from lap 43 to the finish, Clanton pressured Birkhofer relentlessly until sliding underneath the race-long pacesetter through turns three and four to assume command with six circuits remaining.

“I said, ‘If I ever get to his quarter-panel and I can turn left and be by him through (turns) three and four, I got him,' ” described Clanton, who registered his first WoO victory of the 2009 season. “He finally made a bobble off turn two and pushed, and I turned under and went by him.”

Clanton, 33, of Locust Grove, Ga., made the right moves in lapped traffic over the final circuits to steer his Custom-powered RSD Enterprises Rocket across the finish line less than a car length ahead of Muscatine, Iowa's Birkhofer, who drove an MB Custom machine.

WoO points leader Josh Richards of Shinnston, W.Va., finished third in the Seubert Calf Ranches Rocket, about a half-straightaway behind the leaders. He started fourth and climbed as high as second on a lap-37 restart.

Jimmy Mars of Menomonie, Wis., placed fourth in the Deppe Enterprises MB Custom mount, earning the $500 WoO Bonus Bucks cash for being the highest-finishing driver who hasn't won a tour event and isn't ranked among the top 12 in the points standings. Farmer City favorite Shannon Babb of Moweaqua, Ill., completed the top five in the Sheltra Motorsports Rocket. He grabbed the spot with less than 10 laps remaining when Steve Francis of Ashland, Ky., fell off the pace with suspension problems.

Clanton started from the pole position, but he was outgunned for the lead at the initial green flag by front-row mate Birkhofer. The Peach State star lost second momentarily to Richards on a lap-37 restart before regaining the position from the 21-year-old following the race's second and final caution flag six laps later.

While Clanton stepped up his attack on Birkhofer at the event's three-quarter mark, he thought his hopes might have been dashed when Birkhofer burst past three slower cars racing down the backstretch on lap 85. Clearing the lapped machines gave Birkhofer a sudden half-straightaway edge on Clanton.

“I thought, ‘I gotta go now if I'm gonna have any chance,' so I just ran as hard as I could to try to run him down,” said Clanton. “I didn't know if I'd be able to catch him, but in five laps I was right back on him so I knew I had a fast car. I just didn't know if he was just riding in the lead, not taking a chance.”

Birkhofer, 37, never considered himself home-free after his slick move in lapped traffic.

“I knew Clanton or Josh (Richards) was sitting there behind me,” said Birkhofer, who led laps 10-50 of last year's Illini 100 before dropping out with mechanical trouble after catching a rut in turn four. “I kept telling myself, ‘I can't make any mistakes.' “Well, I got bottled up there trying to get by a lapped guy (on lap 94). I figured I was gonna be a sitting duck, and then, all of a sudden, there (Clanton) was.”

Birkhofer tipped his hat to Clanton for pulling off an inside pass for the lead on the high-banked, quarter-mile oval, which developed a preferred line around the cushion at the top of the track.

“He just drove ‘er hard when he needed to,” Birkhofer said of Clanton. “He drove in there and backed into the cushion. He passed me and won the race, so congratulations to him. I'm gonna take second place (worth $10,050) and go home.”

Clanton was a very excited winner when he reached victoy lane. And with good reason — the triumph was his first top-five finish in six WoO events this season, and it added another major-event score to his expanding resume that includes a 2008 World 100 win at Eldora Speedway in Rossburg, Ohio.

“Anytime you can win a race it's good for your career,” said Clanton, who recorded his 11th career WoO victory. “I just want to keep winning as many races as I can. I know that if we can get on a roll like we did (late) last year, it's gonna be tough to beat me this year.”

The race's only caution flags came on lap 37 for Dennis Erb Jr. of Carpentersville, Ill., who stopped on the inside of turn two, and on lap 43 for Brady Smith of Solon Springs, Wis., who spun in turn four with a left-front flat tire that resulted from contact the previous lap with Jason Feger of Bloomington, Ill.