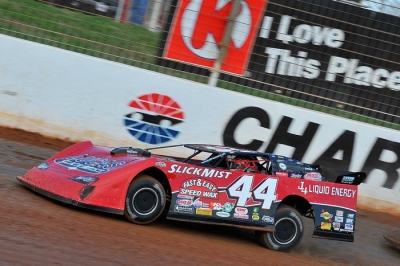 CONCORD, N.C. (March 29) — Earl Pearson Jr. couldn't have picked a better place to score the richest victory of his career. Surviving a leaking right-front tire and Darrell Lanigan's relentless charge from the rear of the field, the 37-year-old from Jacksonville, Fla., held on to capture Sunday's postponed Circle K Colossal 100 at the Dirt Track at Lowe's Motor Speedway. | Postrace notebook | Slideshow | Prelims and blog-style reports

“This is a dream come true,” said Pearson, who pocketed $50,100 for becoming the third driver to win the 4-year-old World of Outlaws Late Model Series event. “Lowe's Motor Speedway is a special track for me because I've spent a long time running for teams from North Carolina, so it feels good to finally win one here.”

Now driving NASCAR Sprint Cup star Bobby Labonte's locally-based Lucas Slick Mist Rocket No. 44, Pearson grabbed the lead from Jonathan Davenport of Blairsville, Ga., on lap nine and was never headed. He turned back a challenge from Josh Richards of Shinnston, W.Va., after the halfway mark and stayed ahead of Union, Ky.'s Lanigan down the stretch to ring up his fifth career WoO triumph.

Lanigan, who pitted to change a flat left-front tire on lap 12, settled for a fast-closing second place finish in his Fusion Energy Rocket after his memorable rally fell short. The defending WoO champion finished 0.670 of a second behind Pearson in the incident-free race, which was condensed to a one-day show because rain enveloped the Charlotte area on Friday and Saturday.

“We had a great race car, but at the end of the race my car got loose and I was like, ‘What in the world is going on?'” related Pearson, whose machine carried an engine built by Larry Wallace and ran on Hoosier tires. “We came to find out the right-front tire had a great big hole in it. When we got back to the pits (after the victory lane ceremonies), it was flat.”

Pearson was able to repel a threat from Richards, who slid by Davenport for second and momentarily pulled underneath Pearson on the lap-53 restart. He gradually opened some breathing room when Richards slowed while attempting to lap John Anderson of Omaha, Neb., with less than 20 circuits remaining, but he realized he was far from home free.

“I saw on the scoreboard that Lanigan was coming in a hurry, and boy, I was getting worried about that,” said Pearson. “At the beginning of the race I saw (Lanigan's No. 29) up there (in third place by lap 11) and I was thinking, He's been running pretty good, so he's gonna be tough to deal with. Then I seen him go in the pit area (one circuit later) and come out last, so I had my doubts that he could come from the back on an afternoon track (surface).

“But with about 20 laps to go I seen him back up on the board (Lanigan reached fifth place on lap 71), and he kept climbing higher. I was just praying for no caution at the end because I know he probably would've just drove right by me.

“To come from the back like that, he had to have the best car here,” added Pearson. “If a caution came out, he would've definitely had the upper hand on me. He was coming, and we had a harder right-front tire so it would take me about three laps to get some heat in it and get going after a restart.”

Lanigan, 38, slid by Richards for second on lap 90 with a door-rubbing inside pass in turn two and needed just three circuits to slice Pearson's full straightway advantage in half. But just when it appeared that Lanigan was ready to make a dramatic bid for the win in the race's final moments, he lost about 10 car lengths to Pearson on lap 96 by sliding slightly sideways in turn four while trying to lap Michael England of Glasgow, Ky. He didn't have enough time to recover.

“We just fell short again,” mourned Lanigan, who quietly accepted his third runner-up finish in five WoO A-Mains this season. “That was the best car I've ever had here. We just cut across the center of the corner and pulled guys, but there were a couple of them lapped cars that hurt me and cost me too much ground.

Lanigan could only laugh when asked if the outcome would have been different had he not been forced pitside to change a cut tire while running third on lap 12.

“I think we could've half-tracked the field,” he said, describing the victory margin he felt was within his reach. “The car was just excellent.”

The race's three caution flags were caused by stopped cars – WoO Rookie of the Year contender Russ King of Bristolville, Ohio, on lap 12; Davey Johnson of Latrobe, Pa., on lap 33; and Tommy Kerr of Maryville, Tenn., on lap 53.

Finishing in positions 6-10 were Chris Madden of Gaffney, S.C., who lost fifth to Lanigan on lap 71; two-time Colossal 100 winner Scott Bloomquist of Mooresburg, Tenn., who started 22nd; Steve Shaver of Vienna, W.Va.; Kelly Boen of Henderson, Colo.; and Jeep Van Wormer of Pinconning, Mich., who slipped out of the top five following the lap-53 restart.