Californian gets up to speed in Hell Tour action 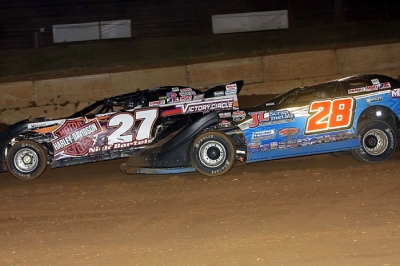 Competing nearly 2,000 miles from his hometown of El Segundo, Calif., Bartels struggled for the majority of his first two weeks on the grueling Midwest tour that includes 29 races in 32 days. But things have started to turn around for the 24-year-old driver as of late as he and his crew have adjusted to different tires, different tracks and pretty much an all-around different style of racing than what he’s used to on the West Coast. | Complete Summernationals coverage

Bartels posted his best series finish with a seventh-place effort in the tour’s 12th-round feature Tuesday at Lincoln Park Speedway. He battled with series veteran Ryan Unzicker of El Paso, Ill., for a top-five spot for much of the 40-lap race before letting three-time series champion Dennis Erb Jr. of Carpentersville, Ill., slip by him in lapped traffic during the race’s closing laps.

The solid showing was a major improvement for Bartels, who hadn’t finished better than 16th in his four feature starts before Tuesday’s race.

“It’s really so much different that at first you’re like ‘Wow, this is like a different world than back home,’ ” said Bartels, who’s fulfilling a long-time dream by attempting to follow the entire tour this summer. “I mean, it’s still dirt tracks, but there’s just a lot different than we’re used to. We’re finally starting to get some of this stuff figured out.”

The biggest obstacle Bartels has faced is a different tire rule than is used at most events he enters back home. He’s found that running softer compounds requires a “more aggressive” driving style and having multiple compound options adds more difficult pre-race decisions.

“It definitely takes a different driving style with these tires,” Bartels said. “They can definitely take more abuse than the harder ones that we’re used to, and just picking the right tire can be really tough at a lot of these tracks. It adds another decision you have to make that you could get wrong, especially when you’ve never raced at these places before.”

Quickly adapting to unfamiliar racetracks has been another impediment that Bartels has had to overcome. With just a few laps of hot laps each night, Bartels has often struggled during qualifying, which makes transferring to the feature lineup an uphill battle.

“They’re all dirt tracks, but they’re so different, each one of them,” said Batels, who finished second in last year’s West Coast Shootout championship chase. “It’s kind of just go out there and try to adapt as fast as you can because you only get like two laps of practice and then you’re in qualifying. That’s the hardest part, trying to hit it just perfect. If you miss just a little bit you’re on the fifth row of a heat race.”

There are some benefits to visiting a new racetrack every night. The young driver will race 29 nights if his budget allows him to stick with the entire tour. For a driver who usually races just 30 races in a single season, the Summernationals is not just cramming a season’s worth of racing into one month, but also a season’s worth of learning.

“We usually get about 30 races in a season if we’re lucky. To be able to race everyday, it’s almost like (driving becomes like) putting your shoes on and walking down the road,” Bartels said. “Running this many races, it’s really helping us learn a lot in a short amount of time that you just can’t really do back home.”

Along with adjusting to new tracks and new tires, Bartels has also had to be mindful of his limited budget, which he noted has hurt his speed on the track at times.

“We’re being really conservative with tires and we’re trying to make these 20s last two or three races. I know you’re not supposed to, but we’re just trying to save every penny we can,” said Bartels, who debuted a new Pro Power Engine earlier on the tour, but has also mixed in running a 525 Crate Engine at smaller tracks to save a fuel cost. “The Pro Power motor is awesome and I wish we could run it every night, but we can save a ton of money running pump gas in the 525 motor.

“We’ve been doing our best to keep our nose clean and keep our equipment in good shape. I think as long as we stay out of trouble we’ll be able to (make the whole tour.)”

While he’ll be watching his budget and doing his best to keep his race car out of harm’s warm, Bartels will also look improve his results in the tour’s remaining 17 races. He hopes to record several top-five finishes before the tour wraps up on July 14 at Oakshade Raceway in Wauseon, Ohio.

“I don’t so much need to win a race. I mean, that’d be awesome, but I think we can definitely get up there and finish in the top five a few times if we keep at it,” Bartels said. “For the most part I just want to learn as much as I can and at the same time, have these guys know who I am by the time we’re done here.”