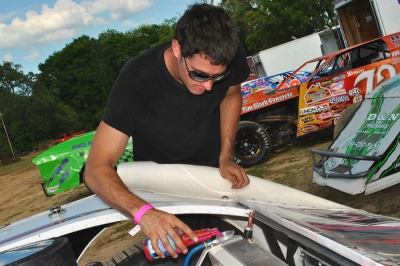 With the grueling series already taking a toll on his race team and his spirits after the first five events, the Ada, Ohio, driver considered using Monday's off day as a dropoff point for his stint on the 29-race tour that visits 28 racetracks in 32 days. | Complete Summernationals coverage

Making matters worse, Henry’s crew chief John McClain, had to head home and back to his full-time job after Sunday’s series race at Wilmot (Wis.) Speedway, leaving Henry without any crew help for any more races he entered on the tour.

“Those first few races when we were struggling and was down, I told myself before Wilmot, if things didn’t turn around it’d be time to go home.” said Henry, who's 14th-place effort at Wilmot was his best finish in the tour's first five races.. “Then we had a decent run, and it was like OK, now it’s decision time.

“It was tough because my crew I’m out here by myself. And I thought we’ll I might as well go. If nothing else, I should at least be able to get a provisional to make the show.”

It turned out Henry didn’t need a provisional at Spoon River. In his first visit to the high-banked 3/8-mile oval, the 26-year-old driver won his heat race and sat on the pole of the main event. He led the entire distance of the 40-lapper, turning back challenges from Shannon Babb of Moweaqua, Ill., in lapped traffic to earn a career-high $5,000 payday for his first series victory.

As rewarding as it was, Henry’s breakthrough triumph was bittersweet without his family, crew or supporters at the track to celebrate with him.

“When I took the checkered flag I had tears in my eyes because I knew my dad was gonna be happy and mad at the same time — because I know he wants to be here,” Henry said. “To win a Summernationals race and win $5,000, it’s a huge win. I just wish dad and my crew guy John and all them could be here for it.”

Holding off Babb and negotiating traffic was perhaps the easy part of a long night at the track. Henry did nearly everything on his own, from unloading and preparing his race car to making adjustments and going over the pre-race checklist.

He enlisted the help of a crew member from Jason Riggs’ neighboring race team to grind one of his feature tires in order to give him more time to go over his car before the feature, but even then, Henry was worried he might have missed something that could’ve prevented him from winning.

“When that B-main was out there, I was sitting here like a nervous wreck, making sure I’ve got the tires at the right air pressure, made sure it had gear oil in it and just trying to make sure everything was ready to go,” Henry said. “I was just running so many things through my head. I’m like ‘man, I got a really good chance here, I don’t want nothing to fall off.’ I was nervous; I haven’t done this in a while where I’m the one responsible for everything.”

The extra work to go it alone is worth it to Henry, who says his biggest gain from running the series is learning more about his Rocket Chassis and garnering more experience by visiting new racetracks.

“I told my dad that if I don’t go out here and try this, I would miss a lot of chances to learn,” Henry said. “I’m here because I want to learn my race car, and I’ve got (Brandon Sheppard’s) Rocket house car team right there and I’m traveling to all these tracks. That’s how you learn, by going and racing.”

Even with the momentum of his Spoon River victory, Henry isn’t sure how much longer he’ll last on the series. He would love to continue learning and visiting new tracks by running all 23 of the tour’s remaining races, but admits that’ll be a tough task.

“Right now I’m just going one day at a time, actually one hour at a time,” Henry joked before he began loading his race — by himself — after Tuesday’s race. “If anything stupid happens out of my control, something with the hauler or whatever, it’ll be tough to keep going. I mean, winning helps out a lot, but it’s tough to do it on your own.”