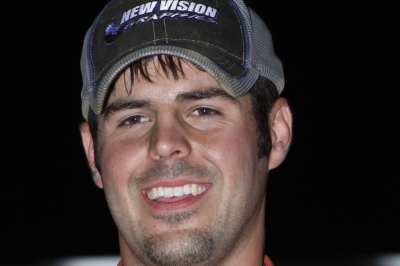 NEW RICHMOND, Wis. (June 16) — Nothing against Cedar Lake Speedway, but Billy Moyer Jr. can think of plenty of other ovals he wishes had multiple dates on the UMP DIRTcar Summernationals than the racetrack that does.

Over the previous two seasons, the 24-year-old Moyer hadn’t made a series start at Cedar Lake without the benefit of a provisional, missed one feature altogether and never finished better than 14th. And the 3/8-mile, high-speed track frequently requires an up-on-the-wheel driving style that isn’t exactly Moyer’s forte.

So even Moyer was shocked — we lost count of how many times he used the word “unbelievable” — when he not only led all 30 laps Friday to win the first of two series races, but boldly got up on the wheel to fight off serious challenges from Brian Shirley and then Brian Birkhofer.

“I swear I think I’m (dreaming) ... especially when the racetrack’s like that. I’m not supposed to win races like that, they say,” said Moyer, the son of 54-year-old Hall of Fame driver Billy Moyer, who finished fourth. “Dad even gets on my case, he says, ‘You’ve gotta get up on the wheel when you have to,’ you know what I mean?”

The victory comes during the biggest week of the Arkansas State University graduate’s six-year Late Model career. He earned his first Summernationals victory Wednesday in Brownstown, Ind., leading all 40 laps on a smoother surface, and stretched a recent personal hot streak to five victories in his last 10 starts overall.

“I can’t quit smiling,” said Moyer, who is proud to earn the respect of top drivers that he’s watched battle his father for many years. “I’ve never seen (ninth-place finisher) Shannon Babb that happy when he hasn’t won.”

Babb, Shirley and others were among those dropping by Moyer’s pit area to congratulate him on his standout victory, and they recognize, too, he may be adding another dimension to his racing by being able to handle more than dry-slick surfaces.

Before driving back to his pits on his four-wheeler, Babb raised his voice over the din of engines on the racetrack: "I always thought he was a wuss until tonight,” he said, drawing a laugh from Moyer.

The younger Moyer worked alongside his father’s crew chief Steve Norris for many years, and Norris was impressed with Little Billy’s performance. The Brownstown victory came on a night when Moyer Jr. clearly had the best car, but Cedar Lake was a different story.

“Tonight, he earned it,” Norris said.

Birkhofer, who ran second to Moyer the last five laps, was also impressed with the driver of the Victory Circle Chassis.

“He did a helluva job. His car’s good ... he drove an excellent race ... Them cars are good. I think his car is probably a little bit better than his dad — it probably upsets his dad a little bit, which is funny,” Birkhofer said with a laugh.

“He raced hard. He did a good job. I can’t take nothing away from the kid. His dad was Mr. Smooth, and he’s Mr. Smooth Jr., really.”

Moyer is always conscious of trying to stay level-headed — “Who knows, we might lead the thing tomorrow and spin out in front of the field,” he said Friday — and to keep the respect of fellow drivers.

But if traffic had been a problem Friday at Cedar Lake, Moyer says he wouldn’t have been hesitant to move someone if it meant keeping the lead.