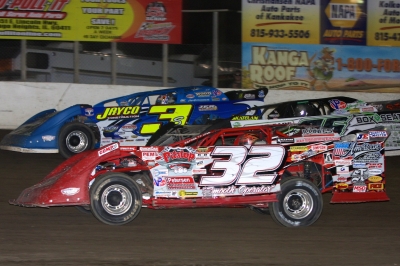 KANKAKEE, Ill. (June 14) — Bobby Pierce was all boy when he entered his first career UMP DIRTcar Summernationals event three years ago, a fresh-faced 12-year-old virtually swallowed by the driver’s seat.

For this year’s 29-race Hell Tour, the 15-year-old driver from Oakwood, Ill., is a maturing, deeper-voiced young man who fills the driver’s seat with his growing frame — and three solid years of Super Late Model experience. | Complete Summernationals coverage

Pierce, son of Hall of Fame driver Bob Pierce, showed some of that experience on Thursday at Kankakee County Speedway in the second leg of this year’s tour, dueling with all-time winningest series drivers Billy Moyer and Shannon Babb in the closing laps of the 40-lap feature.

Battling a pair of drivers who raced against the elder Pierce for thousands of laps, the younger Pierce made a low-groove pass on Moyer, but didn’t have quite enough to catch Babb. He posted his best career finish one of auto racing’s most grueling circuits, one spot better than last year’s rain makeup at Fairbury (Ill.) American Legion Speedway when he led seven of the last nine laps before finishing third.

The runner-up performance was another step toward proving he’s one of Dirt Late Model racing’s up-and-coming racers, and proving he has a chance this summer to become the youngest series winner — by two years — in Summernationals history.

The performance triggered a mini-celebration in the Kankakee pits as Bob, mom Angie and sister Ciara welcomed him back to the team hauler.

“I think they were more excited than I was,” Pierce said. "I think that’s because I wore myself out so much while I was concentrating to pass ‘em all. They were pretty happy. They all hugged me ... all that family stuff, you know?”

With Babb leading all the way from the pole, stretching his lead to a full straightaway midway through the race, Pierce started fifth and wasn’t going much of anywhere. He slipped back a spot before he finally found the low-groove line that no other contender could make work at the third-mile oval.

“I knew I had to do something different. So I started searching around a little bit and changing my line style, and once I hit it ...” Pierce said, his voice trailing off. “I hit my my mark one lap, that one time, then I knew the line that I had ... and I just had to hit it perfectly every other time.”

Pierce moved under Jason Feger and Brian Shirley in one fell swoop, took third from Terry Casey, then began chasing the frontrunning Babb and Moyer when a lap-36 caution reset the field. Pierce took advantage to slip by Moyer for second but didn’t have time to make a serious stab at Babb.

“I think in a couple of more laps I probably could’ve had something for him,” Pierce said.

While Pierce’s father, Bob, one of the most beloved Illinois drivers in Late Model history, began his career touted as “Highbanks Bob Pierce,” riding the rim at regional tracks. But the elder Pierce, a two-time Summernationals champion (’92 and ’95) was more likely to be found in the low groove later in his successful career, and that’s something he’s taught his boy.

“It’s what my dad’s been talking about this whole time: waiting on the car, waiting for it to turn,” the younger Pierce said about his run at Kankakee. “It’s the shortest way around the track, so you just have to learn how it perfect, and once I did, I tried to it every other time.”

Although just two of 29 series races are complete, Pierce hopes the Kankakee performance is a signal of good things to come.

“Hopefully I can just keep this roll going. Second in the Summernationals ain’t too bad for (gaining) points,” Pierce said, hopefully he can complete the entire tour for the first time. “We’ll see where I end up in points after this week, and most likely I bet we keep running it for a while.”

SUMMERNATIONALS TIDBITS: The series makes one of its longest overnight treks of the tour at 455 miles to Cedar Lake Speedway in New Richmond, Wis., which hosts Friday and Saturday night events. ... Billy Moyer is the only two-time series winner at Cedar Lake, which has hosted six races, but only half of them since ’96. ... Kankakee’s pit steward, as usual, talked non-stop on the PA in constantly encouraging drivers to line up: “Let’s go drivers!” ... Veteran crew chief Brad Baum, who left World of Outlaws regular Clint Smith in April to join Bobby Pierce, had just a brief stint before leading the Oakwood, Ill., team. At Kankakee he was assisting Rockfield, Ill., driver Randy Manos Jr. ... Although he finished just 13th at Kankakee after winning the Brownstown opener, Billy Moyer Jr. pulled off a rare feat in Thursday’s feature as he unlapped himself. Babb blew past Moyer midway through the race, but the younger Moyer dropped to the low groove and stayed with the leader before getting back on the lead lap before a lap-36 caution.